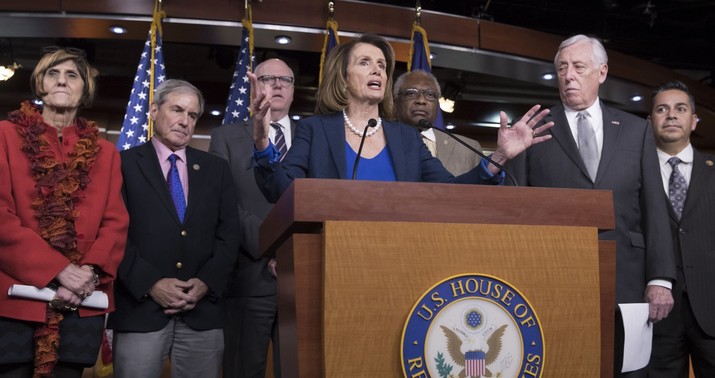 Gee, why might senior Democrats on Capitol Hill get nervous about #DefundthePolice? Could it be that the slogan might not sound so catchy in the suburbs that gave them a House majority? Or could it be, as Sen. Joe Manchin (D-WV) put it, that the idea is “stupid, it’s crazy and anyone who talks about that is nuts”?

Six of one, half-dozen of the other, I’d say. Democrats want to distance themselves from the nihilism while pursuing their policing reform package, but it won’t be as easy as it looks:

Top Democrats on Monday unveiled a sweeping reform bill for police forces. But many are afraid their party will get dragged into a different story — activists’ calls to “defund the police.” So senior Democrats are carefully — but forcefully — speaking out against the idea, hoping to stifle momentum before it overshadows their broader reform effort.

What Democratic leaders are saying: “Don’t let yourselves be drawn into the debate about defunding police forces,” House Majority Whip Jim Clyburn (D-S.C.) warned the caucus on a private call Monday night. Speaker Nancy Pelosi, meanwhile, brushed aside questions about the idea, saying it was a “local decision.” And moderate Sen. Joe Manchin (D-W.Va.) delivered this blunt assessment: “You can’t defund the police, that’s stupid, it’s crazy and anyone who talks about that is nuts.”

In a longer look at this, Politico notes that Democrats are starting to worry about all the pouncing that will take place by you know who:

“I think it can be used as a distraction and that’s my concern,” Rep. Karen Bass, chairwoman of the Congressional Black Caucus, told reporters on Monday. “I think the intent behind it is something that I support — the idea that communities need investments.”

With the GOP eagerly drawing up its attack ads, senior Democrats are hoping to stifle momentum for the idea before it overshadows their broader reform effort. …

Any misstep by Democrats could deliver Republicans a powerful political weapon ahead of November. GOP campaign operatives are seizing on calls to “defund the police” to paint Democrats as radical leftists, just as they did with Rep. Alexandria Ocasio-Cortez’s “Green New Deal” or demands to abolish Immigration and Customs Enforcement.

To illustrate how seriously Democratic leaders are taking the potential problem, several senior Democrats spoke out about it on a private caucus call Monday.

“This movement today, some people tried to hijack it,” House Majority Whip Jim Clyburn (D-S.C.) told Democrats on the call, according to multiple sources. “Don’t let yourselves be drawn into the debate about defunding police forces.”

Not everyone in the caucus agrees. Liberal Rep. Alexandria Ocasio-Cortez, one of the most prominent supporters of the idea, spoke up on the call to say she understands the “profound discomfort” around the defunding discussion. But she also implored her colleagues “not to dismiss or mock” activists’ calls for shifting resources away from police departments, saying it’s important they don’t “demoralize or undercut” grassroots leaders.

Important reminder: The “grassroots leaders” that Ocasio-Cortez doesn’t want to “demoralize” are the same that elected the people who run the police departments now. It’s this point, which Washington Post columnist Henry Olsen raises today, that might explain why more senior Democrats might have some reluctance to immerse themselves in nihilism. Why aren’t the progressives pushing to “defund” the police taking responsibility for the way they have run those departments for decades instead?

Control and funding of police departments are entirely local affairs. There is no federal or state constitutional requirement for any city to have a police department, and many smaller cities across the country do not. Professional police forces did not even exist in the United States until 1844, when New York City created the first department. Minneapolis’s tentative decision is entirely within its — and its voters’ — purview.

Police are far from the only important institution under primarily local control. Public K-12 schools are still largely managed by locally elected school boards. Local governments employ hundreds of thousands of people nationwide, and they contract with private firms to provide services that employ millions more. The power of the local purse to impact employment decisions within a city or county’s boundaries is immense.

This power is largely held by Democrats in most of the city and county governments where black people disproportionately live. For every Rudolph W. Giuliani who rises to power in a big city as a Republican, there are tenfold Democrats running local governments. …

None of this means that improving race relations and equality isn’t a matter for all Americans, including conservatives. It is, and we should all work to treat everyone as a person equal in their humanity and dignity. Anything less than that is a violation of our moral obligations and our national political creed.

It does, however, mean that changes that don’t require national or state legislation can happen right now. Hollywood doesn’t need a federal edict to hire more black directors and actors. Colleges and universities don’t need a new Civil Rights Act to ensure that black candidates are preferred for leadership positions. Cities and counties don’t need to wait for the repeal of the qualified-immunity doctrine to change the way their police forces operate. They just need to align their deeds with their words.

So why don’t they align their deeds with their words? It’s easier to find scapegoats than to govern responsibly, that’s why. Advocates demand more “community policing,” which would actually help — but would take more officers, better training, and therefore larger budgets. Progressives in the Twin Cities have talked about “community policing” for years if not decades, but they haven’t invested in it. And now they want to divest themselves from the police department they actually control in order to reduce or eliminate law enforcement and crime prevention altogether.

No wonder senior Democrats don’t want to talk about this. This is their party’s problem, and their party doesn’t have a solution to it.