Minnesota rodeo: National Guard and police round up 150 curfew violators — and find caches of arson materials 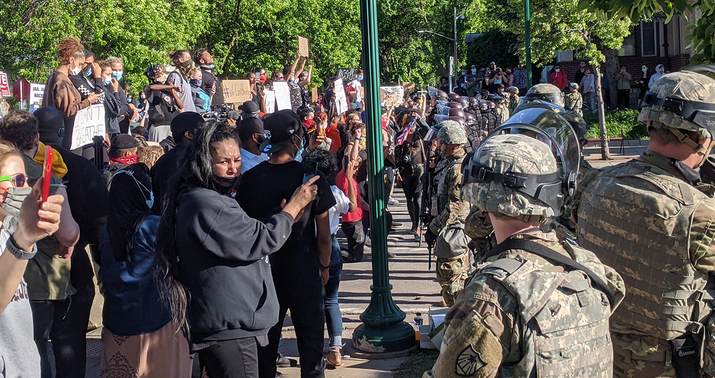 It took several days for Minnesota to assert itself in the face of rioters, but they finally took some steps toward restoring order yesterday. Rather than the retreats that characterized the police and National Guard response for most of a week, last night the combined forces began arresting people en masse for curfew violations. Around 150 got hauled into custody last night, while police and National Guard used some of the intelligence gleaned to seize materials for use in more arsons:

About 150 protesters were arrested near I-35W and Washington Avenue in downtown Minneapolis Sunday after they failed to heed the 8 p.m. curfew.

“Even peaceful protesters who are breaking curfew are subject to arrest. Please go home and stay there. Curfew is in effect in Minneapolis and St. Paul until 6 a.m.” said a tweet from the state Department of Public Safety.

The large influx of arrests had one notable effect on another prisoner. Former Minneapolis police officer Derek Chauvin had to get relocated to state prison rather than jail out of concern for his safety in more than one way:

At a news conference Sunday night, Corrections Commissioner Paul Schnell noted that Derek Chauvin, the former Minneapolis officer accused of murder in George Floyd’s death, had been moved from the Hennepin County jail to Oak Park Heights state prison. He said concerns included COVID-19 and the expectation that a large number of people could be booked into Hennepin County jail tonight. He’s scheduled to appear in court June 8.

Chauvin will need special custody for at least as long as his trial runs, and not just for COVID-19. They got him out of the jail to keep protesters and agitators from ripping him to shreds, and Chauvin will have the same problem from the prison population if put in normal confinement.

The newly assertive posture from police and National Guard deployments appeared to have a salutary effect. No major riots took place, thanks to quick dispersals of gatherings and the sudden discovery of arrest powers by the Walz administration. That doesn’t mean that the trouble is over, and caches of materials found overnight show that agitators are planning more:

In St. Paul, police received numerous reports of suspicious vehicles without license plates parked and driving around the city, according to department spokesman Steve Linders. Officers also spotted some of those vehicles.

They investigated an abandoned pickup truck loaded with construction equipment. Callers reported that people had gone to and from the truck, taking items from it.

“Our officers were also encountering vehicles with no plates driving in our city,” Linders said. “When officers attempted to stop the vehicles, they fled. We did not pursue them. Safety is a big concern in these situations.”

Public Safety Commissioner John Harrington said Sunday that authorities also spotted cars without license plates, their lights off and windows blacked out. When stopped, some of the occupants fled. Others were arrested.

Some cars, including some stolen in Minnesota, were filled with rocks and weapons, Harrington said. Authorities also discovered caches of incendiaries near the sites of fires that may have been transported in some of the stolen vehicles, he said.

We Minnesotans have been discussing the cars-with-no-plates phenomenon for a few days now. Some have claimed to see the cars casing the suburbs, perhaps looking for softer targets. Those would have significant problems for rioters and agitators, especially a lack of cover and a populace that might be more inclined toward acts of self-defense, perhaps even proactively. Police in the suburbs are now on alert for this kind of activity, and it’s not likely to get much farther than the recon that may or may not be taking place.

The Star Tribune reports now that state and local officials are at least recognizing the organizing behind all of these events. “The fact that we’ve seen so many of them in so many places,” said public safety commissioner John Harrington, “now makes us believe that this is part of that pattern that shows that this in fact an organized activity and not some random act of rage.” They’re also backing off the claim that it’s all coming from outsiders, too:

The Hennepin County jail bookings also showed that 13 Minnesotans and two people from out of state were arrested before Saturday’s curfew when a massive law enforcement force, which was beefed up by thousands of National Guard soldiers, swept across the city to push curfew violators off the street and stymie violence.

It appears more Minnesotans than out-of-area protesters also were arrested on Friday — a night of mayhem when businesses, cars and dumpsters were set on fire. Of those booked in Hennepin County after the 8 p.m. curfew, 17 were Minnesotans and two appeared to have come from outside the state. Earlier in the day, 12 Minnesotans were arrested compared with five with out-of-state addresses.

That was a strange position for Walz and the mayors to take from the start. Some of this may be coming from outside agitators, but there have always been some willing to get violent here in the Twin Cities. The looting clearly was a local phenomenon, crimes of opportunity rather than an organized pillaging of businesses.

For now, it appears that the state government has taken a few belated steps toward imposing order. It will take several days of cracking down to get this back under control, however. We will likely have curfews remain in place and perhaps even the nighttime highway closures that took place over the weekend for a few more days until the agitators either get arrested or fade into the background. We can hope for the former, but I’d bet on the latter.