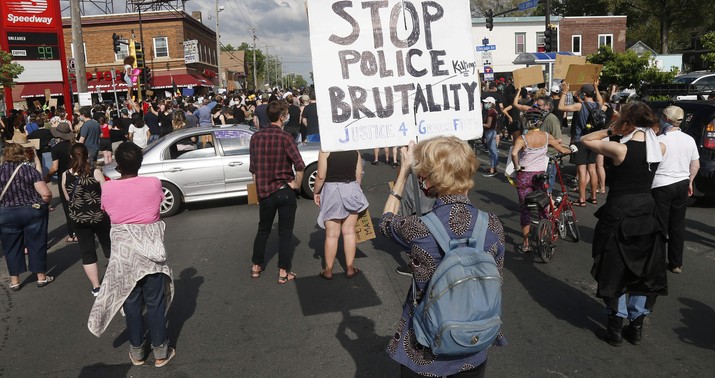 “It’s just too dangerous for us to be there right now,” WCCO’s Jeff Wagner reported last night. While protesters surrounded the Minneapolis police department’s 3rd Precinct for the second straight night to demand action after the death of George Floyd, others looted nearby stores and set fire to the Autozone across from the precinct. The National Guard got called out to replace police for crowd control:

One person got shot to death in the chaos, although the circumstances of that homicide are not yet fully clear. The shooter turned out to be a local business owner who thought his victim was a looter:

Minneapolis shuddered with violence overnight Wednesday, as rioters ignited fires and looted stores all over the city, standing in stark contrast to the mostly peaceful protests outside of a South Side police station over the police killing of George Floyd.

Early Thursday, city and law enforcement officials were still tallying the full toll of the night, which saw at least five people struck by gunfire, one fatally when the owner of a pawn shop opened fire on a man he believed was burglarizing his business. Dozens of businesses were either looted or torched, or both, mostly in the area of Minnehaha Avenue and E. Lake Street, but also along business corridors on the city’s North and South sides. …

It’s not clear how many arrests police made throughout the night. In the fatal shooting, a 59-year-old man was booked into the Hennepin County Jail on suspicion of murder, according to online jail records.

Department sources say the suspect shot a man whom he assumed was trying to loot Cadillac Pawn & Jewelry, at 1538 E. Lake St. — about a mile west of the main protest site. The victim, whose identity hasn’t yet been released, died later at a nearby hospital.

Was the victim looting? There was certainly plenty of looting going on last night, not just in the 3rd Precinct area but across the city. If so, then the shooter might have had good reason to fear for his life, and thus would have a potential defense against any charges brought. Self-defense in the middle of a riot won’t be a tough sell, but the shop owner had better hope that his surveillance video backs up such a claim.

This, on the other hand, is not going to stand up as a self-defense case. A woman in a wheelchair got attacked by rioters, but that might have to do with the knife she allegedly used to attack rioters herself (via Twitchy):

At the Target in Minneapolis that was being looted tonight during the BLM riot, a woman in a wheelchair was attacked. pic.twitter.com/JxsXTB30xI

Just to review: Self defense cannot apply in cases where the conflict was initiated by the person making the claim. That’s as true for the McMichaels in the Arbery case as it is here, in which this woman apparently appointed herself as the police of Target.

Mayor Jacob Frey appealled for calm, but his earlier demand might have stoked these passions:

“Yes, we’re reeling,” he continued. “I understand the anger and pain, and we need the public’s help in keeping the peace tonight. We need that in order to get through this together.

“I love our city. I know our residents do too, and we need to be doing everything possible to not have one tragedy beget more.”

Frey, however, unnecessarily raised expectations in demanding that police arrest Office Derek Chauvin for Floyd’s death. Chauvin and three other officers are at the center of at least three investigations into Floyd’s death, the specific cause of which has yet to be determined. Frey’s call for an arrest is at best premature, and at worst pandering to demonstrators in a manner sure to raise unrealistic expectations. What did Frey think would happen when the arrest didn’t take place?

Based on what has been seen so far, people in Minneapolis are right to be angry about Floyd’s death. They are right to demonstrate for accountability and change in a police department that finds itself in too many of these kinds of cases, especially lately. However, calm comes from leadership that doesn’t set irrational expectations or panders to the hysteria, and that’s not just elected leadership, either. The one bright spot in the video above is the gentleman who stops a looter by chiding him and shaming him back into productive behavior. If we had more leadership like that in Minneapolis, we’d not see the city burning at all — and George Floyd might still be alive, for that matter.

Leadership is also on the mind of my friend John Hinderaker, who writes at Power Line that we should wait to see all the evidence before reaching conclusions. He also reminds readers about the nature of leadership in Minneapolis for the last few generations:

But there is one point no one seems to be making. The City of Minneapolis has been governed exclusively by liberals for decades. The current mayor, Jacob Frey, who was quick to denounce his own police department, is a left-wing Democrat. The Minneapolis City Council consists of Democrats and Green Party members who think the Democrats are not radical enough. Under left-wing leadership, Minneapolis has been governed abysmally for a long time. Its police department is but one part of an incompetently governed city.

The issue isn’t actually one of race. The last Minneapolis Police Department killing that made international news was the shooting of Justine Damond (white) by Mohamed Noor (African-American) for no apparent reason. The MPD has long been troubled, and its current Chief is African-American. The issue isn’t racism, it is incompetence.

A rational person might ask: given that Minneapolis has been governed by liberal Democrats for decades, and is now a mess in a multitude of ways, including the fact that its police department has been involved in one fiasco after another, why don’t we try something different? Why don’t we go back to electing Republicans, as we did decades ago? When Republicans governed Minneapolis, it was generally regarded as a model city–prosperous, progressive and remarkably crime-free. Isn’t it time to draw the curtain on decades of failed leadership, exemplified by underqualified leftists like the current Boy Mayor, Jacob Frey?

One final point: The Minneapolis PD has a pretty bad track record overall in such cases, but the last two did result in prosecutions of police officers for wrongful use of lethal force resulting in homicide. The jury acquitted in the Philando Castile case, in what appeared to be a very bad decision from the outside looking in, but that’s on the jury, not the prosecution. Noor got convicted of murder in the Damond shooting. At least recently, the system has worked, so why not give it a chance to work this time, too? That’s what real leaders would be saying right now.