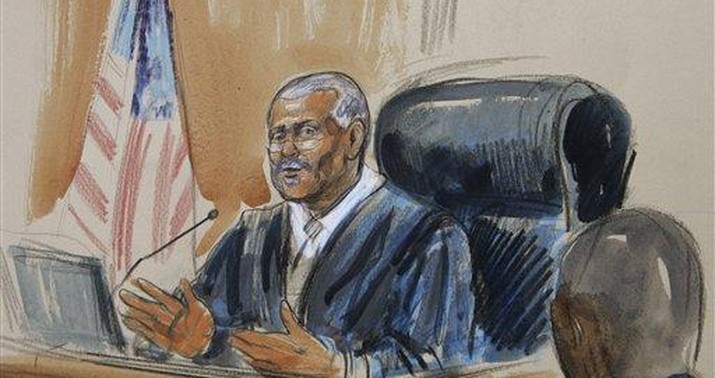 Impeachment fever is back, baby! This time around, though, the other side has it, and its target is on the bench rather than in the Oval Office. House Republican Bill Johnson of Ohio announced his intent to seek an impeachment hearing for Judge Emmet Sullivan for his recent orders in the Michael Flynn case, saying that Congress needs to remove him for “tyranny”:

Rep. Bill Johnson of Marietta says he’ll introduce a resolution seeking an impeachment inquiry of Judge Emmet G. Sullivan, arguing that Sullivan has “far exceeded his authority” in the case of Flynn, who admitted lying to the FBI but later withdrew his guilty plea. Sullivan appointed a third party attorney to present legal arguments against dismissing Flynn’s case after Attorney General William Barr declared the Justice Department was dropping charges against Flynn.

A statement Johnson released on Wednesday declared that Sullivan was was making his own rules, and pronounced it “tyranny.”

“Judge Sullivan gets to interpret the law; but he does not get to say how to enforce the law,” said Johnson. “Both parties in this case have made clear they want the matter dropped. Judge Sullivan appears to be attempting to continue this case as ‘Sullivan v. Flynn,’ and that can’t happen!”

Let’s just stipulate up front that we can safely list this in the Things That Just Ain’t Gonna Happen column. Not that the House doesn’t have the authority to impeach a judge — the Constitution clearly gives them that authority, and the House has used it on a small number of occasions. One of their current members, Alcee Hastings (D-FL), was removed from the bench in 1989 through impeachment and Senate conviction, in fact. Three years later, he won a House seat and has been around ever since.

It won’t happen now for a couple of reasons — one political, one substantive. Politically, it’s a non-starter with Democrats in control of the House. Any such effort would have to go through the House Judiciary Committee, whose chair Jerrold Nadler might have the second-biggest investment in the Russia-collusion hoax that precipitated Michael Flynn’s prosecution. (Adam Schiff clearly has the most invested in that discredited narrative.) Even if Republicans took advantage of a momentary plurality on the House floor to push this resolution, Nadler can and certainly will bury it. The only person Nadler’s interested in impeaching is Donald Trump.

Substantively it doesn’t meet the true criteria for impeachment, either. Historically, the House has used this mechanism for outright corruption, as was the case with Hastings. Incompetence and abuse of power are also legitimate grounds, at least theoretically if not practically, but either would have to be sustained for the House to take credible action against a federal judge. Using impeachment to punish a judge over the actions in a single case smacks of politicizing the bench, and it sets precedents that both sides of the political divide would live to regret setting. Appellate courts exist to deal with abuses in individual cases, and the federal judiciary has its own enforcement mechanisms for bad behavior. This case has only barely come to the official attention of higher Article III authorities, which should be given the chance to resolve the situation for itself.

With that said, though, one can’t fault Johnson for being outraged over Sullivan’s abuses in this case. Jonathan Turley wonders today where everyone else’s outrage over abusive prosecution and judgment has gone, especially in the media:

For decades, the legal community has decried common practices used by prosecutors to coerce pleas from defendants. Prosecutors often stack up charges and then drain defendants until they agree to pleading guilty. There was a time when such abuses were regularly called out in leading newspapers. These are not those times.

The Flynn case was a textbook example of these abuses but media commentators quickly adopted the “anyone who pleads guilty must be guilty” mantra. Suddenly, the “proof is in the plea” regardless of false representations, withheld evidence, and conflicting findings in the Flynn case.

The only acceptable take in the media is that the motion to dismiss the Flynn case is an outrageous politicalization of the justice system. This narrative is only possible by ignoring the long-standing questions over the handling and charge in the case. Indeed, it is telling how both controlling law and countervailing facts have been uniformly (and knowingly) ignored in order to portray the case as a virtual immaculate prosecution. …

“In like Flynn” once meant that you lived a charmed life of access or success. Today, it appears the media has adopted a chilling “out like Flynn” view, meaning some people simply do not deserve fair judicial or media consideration. Indeed, it is now an article of faith to dismiss any question about the conduct of the prosecutors in the Flynn case, even if it means adopting the long discredited view that only the guilty plead guilty.

The masks have dropped from many faces in this Russia-collusion hoax. Turley’s one of the few media commentators (CBS’ on-air legal analyst) honest enough to call it out.

“They are groups that need to be moved to the forefront, in my opinion.”

Lemon: Let’s face it, Jesus Christ “admittedly was not perfect when he was here on the Earth”

God and man at CNN.

Today’s hot topics on Relevant Radio®: Love in the time of COVID; SCOTUS and religious liberty

Pelosi to WH: A trillion dollars for Phase 4? That’s just the ante, pal

“It is clear that a major explosion took place…”

NFL players uninterested in sharing the burden of lower revenues

Maybe you should take the season off after all

“You don’t see me complaining abt ‘cancel culture'”

International insult: Statue of Melania Trump is canceled in Slovenia