Say, has anyone noticed that Net Neutrality’s doomsday scenario has not materialized? 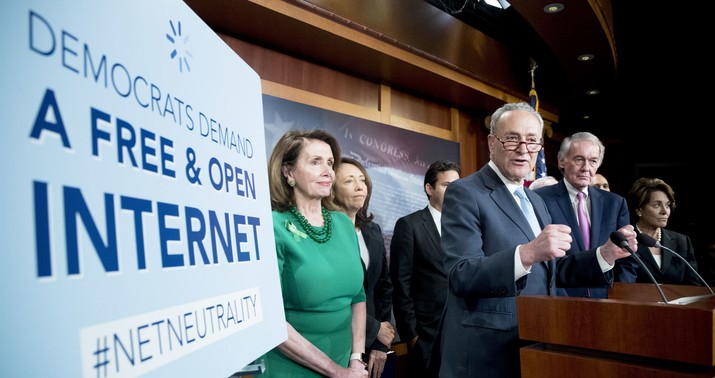 According to all the warnings from Net Neutrality advocates, the COVID-19 pandemic and shutdown had all of the requisite conditions for Internet catastrophe. Suddenly, millions of people had to connect from home, traffic was skyrocketing, and the demand for high-volume traffic in video applications exploded exponentially. Traffic spiked 20% overnight — and actually increased from there.

And … it all worked. Users didn’t get rationed, and neither did providers. No one had their streams choked. And while bandwidth has at times been inconsistent for brief periods, widespread outages haven’t occurred. What gives? A massively flexible design combined with proper investment and preparation for disasters have proven itself in the crisis, wrote Charles Fishman at The Atlantic last week. The Internet and its backbone providers turn out to be far more resilient and responsive than those who advocate for government control claimed:

In the United States, internet traffic carried by AT&T, one of the nation’s largest internet providers, rose almost immediately by 20 percent starting in mid-March. By the end of April, network traffic during the workweek was up 25 percent from typical Monday-to-Friday periods in January and February, and showed no signs of fading. That may not sound like much, but imagine suddenly needing to add 20 percent more long-haul trucks to U.S. highways instantly, or 20 percent more freight trains, or 20 percent more flights every day out of every airport in the country. In fact, none of those infrastructure systems could have provided 20 percent more capacity instantly—or sustained it day after day for months.

Yes, there have been hiccups. Freedman notes that “we are seeing an increase not only in traffic, but in short-duration outages.” Your laptop—or the apps you’re trying to use on it—may well be advising you, from time to time, that your internet connection is weak. But that’s hardly surprising, or alarming, Freedman says, given that we’ve taken growth “that would happen over a year or two and compressed it into six weeks.”

The story of how that happened may not involve the sort of life-threatening heroics we’ve seen from medical personnel in New Orleans or New York. But amid so much highly visible dysfunction in the American response to the coronavirus, it’s worth appreciating the internet as an unsung hero of the pandemic. It has stayed on because people out there are keeping it on. The internet’s performance is no accident, but rather the result of long-term planning and adaptability, ingenuity and hard work—and also some characteristics that have become part of the personality of the internet itself.

To the extent that problems arise, it doesn’t usually come from the network itself, or at least not its cores or extended nodes. Breakdowns or bandwidth chokes in these areas can be resolved by rerouting traffic around them, which Internet providers had explained all along in the Net Neutrality debate. The most significant trouble these days usually arises in the “last mile,” connections to residences, where the Internet is at its least flexible, but also where such problems are much more localized. That’s where providers are now focusing on adding more flexibility, if possible:

Even if you have a fiber-optic connection right to your house, it’s nothing like the connection to an office building. The internet and the mobile-phone network both still rely on a huge array of central switching offices—modeled on the central offices of the telephone system from a century ago—that collect calls and internet traffic from neighborhoods and route them into the larger network, and vice versa. Your home’s fiber-optic connection is part of what’s called the “last mile” infrastructure of the internet—leading from those central offices out to subdivisions and small businesses. In your own neighborhood, there’s less “route flexibility” than in your city or region—just as there is with streets or the electric grid. And it’s turned out that the last mile is what’s preoccupying many internet engineers and technicians today.

So much for the Net Neutrality argument, wrote James Pethokoukis yesterday. He’s not anticipating that it will get dropped, but this should demonstrate the reason why skepticism should be applied to demands for massive regulation to a market that clearly works properly as is:

Yet our digital infrastructure has met the challenge. Or to put it another way, all those hysterical predictions about how repealing net neutrality back in 2018 would ruin the internet haven’t panned out. At least not yet. Of course, some net neutrality proponents seem to have missed the good news. Or refused to accept it. Take this bizarre and cognitively dissonant headline from Wired magazine: “The Covid-19 Pandemic Shows the Virtues of Net Neutrality: Network speeds are holding up despite the crush of internet traffic. Freed from rules, broadband providers have cut investment in their systems.” Eppur si muove.

But rather than see this technology success story as a powerful data point for America’s current light-touch regulatory regime, some will continue to demand more government control. Indeed, these are probably the same folks who see Amazon’s impressive ability to weather the pandemic as, somehow, proof the company should be nationalized. It’s a “Now more than ever!” kind of thing, I guess.

One other lesson that should be learned: Apply deep skepticism to extreme activist claims that this or that policy tweak will save or destroy the American economy or some big chunk of it.

There was ample reason for skepticism when Net Neutrality rules got adopted in the first place. No one could point to a crisis that demanded a regulatory response, let alone traffic management by government. Instead, we were warned that the system was finite and its resources had to be managed in order to create a fair distribution. “Fairness” was the entirety of the argument with government the only option as an arbiter. When those rules got repealed in 2018, the reaction produced hysterical claims of disaster, complete with people dying as a result. And that’s separate from the death threats aimed at FCC Commissioner Ajit Pai for pursuing the repeal, and the bomb threat during the repeal vote.

This global pandemic has proven the hysterics wrong in two ways. First, the Internet has not just worked, it has thrived, and new markets keep emerging within it as innovation continues and reaches more people. (Zoom is a great example of this, but there are others as well.) Second, it reminds everyone what a true disaster looks like, and what actually threatens people’s lives. The COVID-19 crisis has forced us to become a more serious people, and that in itself will undermine the efforts of those who wish to create pseudo-crises to serve their own agendas. Or at least we can hope that it does, and that this lesson sticks.

Journo meltdown in progress over Peter Navarro's 'rogue' op-ed listing all the times Dr. Fauci has been wrong

“…had been experiencing fever and chills on Monday”

Living on Oak Street? Don’t get too comfortable

Next stop: the EU?

“The world will not allow Beijing to treat the South China Sea as its maritime empire.”

Not so fast on those reforms