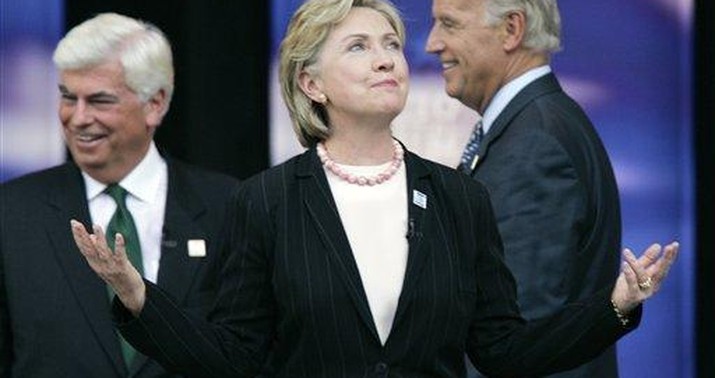 Unbelievable. I bet all those women’s groups that held off criticizing Joe Biden over Tara Reade’s allegations are happy they held off going public now, eh? Biden has spent the past year pandering to women by promising to pick a female running mate. Today, his campaign announced that those candidates will have to pass through the vetting of former senator Chris Dodd, co-author of one of the most notorious stories of sexual harassment and assault from Capitol Hill.

Can’t anybody on Team Biden do a Google search, for Pete’s sake?

Former Vice President Joe Biden’s presidential campaign formally announced the committee that will vet potential running mates on Thursday, beginning a search that will culminate in one of the campaign’s key moments ahead of the Democrat’s general election battle with President Donald Trump.

“Selecting a vice presidential candidate is one of the most important decisions in a presidential campaign and no one knows this more than Joe Biden,” Jen O’Malley Dillon, Biden’s campaign manager, said in a statement announcing the committee.

Why pick Dodd at all? He’s been out of Congress for nearly a decade, and presently works as a Hollywood lobbyist. Dodd is a Beltway barnacle, having inherited the Senate seat from Connecticut from his father, the kind of establishment insider that populists loathe. Even without the #MeToo hangover, Biden’s pick of Dodd puts his campaign into nostalgia mode, perhaps even for a pre-Barack Obama Democratic Party — where the Clintons and the Kennedys rode herd.

That pales in comparison to Dodd’s history with Ted Kennedy, however. Thirty years ago, the late Michael Kelly wrote a lengthy profile of Kennedy at GQ that included this shocking 1985 incident with Dodd at a restaurant. Allahpundit noted it nine years ago, in connection to another Dodd-Kennedy sexual harassment anecdote involving Carrie Fisher, also from 1985.  Penthouse reported the “waitress sandwich” incident a year before Kelly, and Kelly got confirmation of it from the waitress involved:

It is after midnight and Kennedy and Dodd are just finishing up a long dinner in a private room on the first floor of the restaurant’s annex. They are drunk. Their dates, two very young blondes, leave the table to go to the bathroom. (The dates are drunk too. “They’d always get their girls very, very drunk,” says a former Brasserie waitress.) Betty Loh, who served the foursome, also leaves the room. Raymond Campet, the co-owner of La Brasserie, tells Gaviglio the senators want to see her.

As Gaviglio enters the room, the six-foot-two, 225-plus-pound Kennedy grabs the five-foot-three, 103-pound waitress and throws her on the table. She lands on her back, scattering crystal, plates and cutlery and the lit candles. Several glasses and a crystal candlestick are broken. Kennedy then picks her up from the table and throws her on Dodd, who is sprawled in a chair. With Gaviglio on Dodd’s lap, Kennedy jumps on top and begins rubbing his genital area against hers, supporting his weight on the arms of the chair. As he is doing this, Loh enters the room. She and Gaviglio both scream, drawing one or two dishwashers. Startled, Kennedy leaps up. He laughs. Bruised, shaken and angry over what she considered a sexual assault, Gaviglio runs from the room. Kennedy, Dodd and their dates leave shortly thereafter, following a friendly argument between the senators over the check.

At the time, Roll Call’s Bill Thomas referred to both men as “two guys in a fraternity who have been loosed upon the world.” The story gained even more traction a few years later when the Monica Lewinsky story exploded. In February 1998, in a piece with a now-laughable headline “Washington’s Sexual Awakening,” New York Magazine’s Eric Konigsberg presented the Dodd-Kennedy “waitress sandwich” as part of a male-predator culture that was slowly ebbing away. Replacing it, Konigsberg argued, was a Washington culture where women were comfortable as predators — and cited Lewinsky as evidence of it.

Clearly, Konigsberg was no prophet. Biden might not have been as blatant about it as Kennedy and Dodd, but he’s been doing the creepy-uncle thing for decades, as several of his female former staffers alleged last year, including Reade. Even when it’s caught on camera, the media has looked away from it until now. Biden has every reason to think it’s still business as usual, which is why he felt comfortable naming one half of the “waitress sandwich” to vet the women that Biden might appoint to serve under him on the ticket.

And Biden might have be right, because right up until yesterday, the media made it clear that they saw it as business as usual. To the extent they covered Reade’s allegations, they put it in the “Republicans pounce!” genre of reporting. Biden felt no real pressure to address the concerns, and so they just didn’t exist within his bubble. With that in mind, Biden must have thought “why not?” to the idea of appointing Dodd to the vetting committee.

Will the media raise these questions now? Better yet, will the women lining up to be Biden’s running mate make an issue of it?