ABC: US about to turn a corner on mass COVID-19 testing? 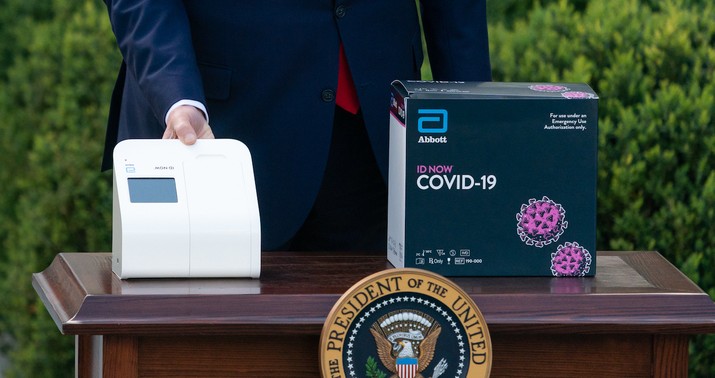 Could America be about to remove its biggest blinder in the coronavirus pandemic? A lack of widespread testing and population sampling has epidemiologists using secondary measures to estimate the penetration of COVID-19 in US populations. ABC News reports this morning that commercial labs are ramping up efforts to quickly produce mass-distribution serological tests that will establish a much more complete picture of the pandemic’s spread. By May, ABC reports, we may have “tens of millions” of tests in the field, which would be the game-changer for which we have waited weeks, if not months.

One large potential obstacle might be the Food and Drug Administration, which has offered to expedite approvals — to a point. The bigger obstacle might be whether these tens of millions of tests will actually work:

With a White House increasingly anxious to get the economy in gear and an approved vaccine for the novel coronavirus still months away at best, public health officials are hoping that tens of millions of Americans will have access to a simple blood test that can identify recovered patients who’ve developed some kind of immune response to the virus.

The idea behind the push is that people who have been exposed to the virus form antibodies in their bloodstream that may help them to fight off another infection. The hope is that the body’s antibodies against COVID-19 can diminish the chances of re-infection. Theoretically, those found to have immunized antibodies could then return to work and help reignite the economy.

Commercial labs are scrambling to develop and distribute serologic tests, as they are known, in large quantities — and the federal government is doing its best to expedite an approval process that is, under normal circumstances, lengthy and cumbersome.

Adm. Brett Giroir, tapped by President Donald Trump to lead testing efforts, said he is “very optimistic” that tens of millions of the tests will be available by May. And he says it could dramatically change what we know about the scope of infection inside the United States.

In my earlier post, I wondered whether we knew enough to be optimistic at all. Our evidence of progress against COVID-19 comes from secondary measures — the rise and fall of death totals, hospitalizations, and in the Kinsa series, reported fevers. While that data has value, it doesn’t give us any direct evidence on just how far the disease has spread, nor what its expected lethality might be. The only people being tested now are the symptomatic and those who have come into contact with them, which means our direct evidence comes from a self-selecting sample that tells us little about the status of populations in the US.

Having test capacity on this scale, however, and with quick results to boot, would change all of those calculations. We would have hard and direct evidence of the footprints of the disease within the US. Those who have recovered from mild and unsuspected cases could be freed from self-isolation; those at risk without antibodies would know to continue it. It would finally allow us to project lethality on a rational basis, as well as prepare for a second or third wave down the road based on where the highest risks would be.

To the extent that the FDA’s processes unduly hinder that, we need to clear that red tape out of the path. Reason’s Jacob Sullum lays the blame for our current blindness (and the economic wreckage it wrought) on the FDA and CDC for not incentivizing test development early enough:

At first, the U.S. Centers for Disease Control and Prevention (CDC) monopolized COVID-19 tests. When the CDC began shipping test kits to state laboratories in early February, they turned out to be defective.

The CDC and the Food and Drug Administration initially blocked efforts by universities and businesses to develop and conduct tests before relaxing the restrictions that made it impossible to assess the progress of the epidemic. Making a false virtue of necessity, the CDC set irrationally narrow criteria for testing, which meant that carriers without severe symptoms or obvious risk factors escaped detection.

The CDC still insists that “not everyone needs to be tested for COVID-19.” But without testing everyone—or at least representative samples—for both the virus itself and the antibodies to it, we can do little better than guess its prevalence, its lethality, and the extent of immunity among the general public.

Even now, months after the Wuhan outbreak and the first reported case in the U.S., we have managed to test less than 1 percent of the population, and those tests have been limited mainly to people with symptoms severe enough for them to seek treatment. Since people infected by COVID-19 typically experience mild symptoms or no symptoms at all, that’s a real problem.

That has been pretty well hashed out already, but the context of China’s lies about human-to-human transmission has to be kept in mind, too. Had we known of that feature of COVID-19, the need for speed would have been a lot more obvious when those decisions were made. Still, Sullum’s correct that the two bureaucracies have been slow to respond by cutting their red tape even after the nature of the pandemic became clear.

However, the FDA says they still have good reason to remain cautious about expediting approvals, especially for non-clinical tests:

“It’s a balance for the FDA to get things out quickly, and there has been a lot of pressure and lot of push to get tests out,” said Dr. Angela Caliendo, an infectious disease expert at the Brown University medical school, describing the FDA’s use of emergency authorizations for serologic tests.

“To get [tests] out quickly means you don’t have a clinical study,” Dr. Caliendo continued. “So the upside is we have the tests. The downside is we don’t exactly know how well they’re going to perform.” …

Scott Becker, the CEO of the Association for Public Health Laboratories, said he has raised the concern of faulty tests with the federal officials – including Giroir. To their credit, Becker said, the FDA, CDC, and National Institutes of Health have responded well and indicated that they plan to roll out a government validation panel to review tests in the coming weeks.

“The last thing we need right now is bad tests on the market,” Becker said. “You do not want to provide a bad result. We need to ensure that whatever tests Americans are going to get have a high degree of accuracy.”

Bad tests will make the situation much worse. If they produce false negatives, infected people will increase their public interactions and spread the disease further. False positives will send people to already overextended clinics and hospitals, where they might end up getting exposed unnecessarily. If the “tens of millions” of tests envisaged for May end up producing bad data, we may be worse off than we would be without them.  Just ask the UK and EU countries that bought millions of COVID-19 tests from China, only to discover that they produced false negatives on a regular basis.

We need these tests to come out fast and be accurate and reliable. Unfortunately, we can’t pick one priority over the other. The FDA had better find a way to establish reliability quickly and adjust its approval process accordingly so that the American public can put their faith in these test results.