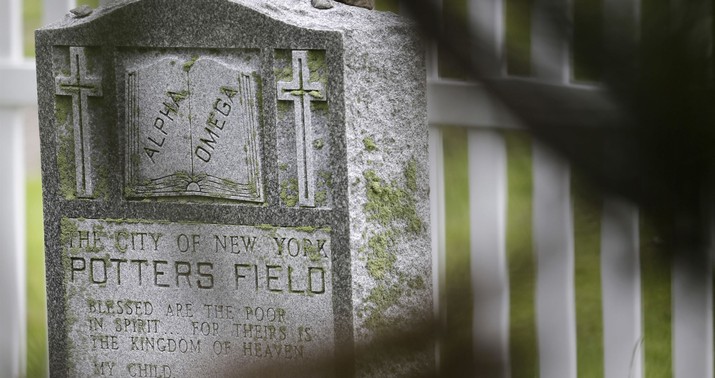 Call this a grim exercise in setting expectations. Evidence of progress has emerged in New York City’s fight against the deadly coronavirus pandemic, but that doesn’t mean that the consequences of it will magically vanish. NYC council member and the chair of its health committee warned New Yorkers in a tweetstorm earlier this morning that the city will need to resort to mass graves to deal with the dead — in one of its parks, in fact.

The problem, Mark Levine announced, is that so many deaths have come so fast that it’s overwhelming the system that cares for the dead. It is, Levine writes, “the equivalent of an ongoing 9/11,” mortuary wise, anyway:

Grieving families report calling as many as half a dozen funeral homes and finding none that can handle their deceased loved ones.

Cemeteries are not able to handle the number of burial requests and are turning most down. 4/

The deaths are coming so fast that the city can’t even certify who died of what with certainty. That means, Levine says, that the city has undercounted the coronavirus deaths:

Now only those few who had a test confirmation *before* dying are marked as victims of coronavirus on their death certificate. This almost certainly means we are undercounting the total number of victims of this pandemic. 7/

That’s … not good news at all. Allahpundit has covered the IHME projections and noted the sharply lower death totals than first expected. That should mean that COVID-19 is less lethal than first thought, but that only works if the dead have been tested for the virus. If they haven’t been, then we really don’t know where we are on the death curve and lethality, although the hospitalization curve does look promising.

If the deaths continue at this rate, the city will run out of room for storage. And that means they will have to start disposing of them — at least temporarily:

Soon we'll start “temporary interment”. This likely will be done by using a NYC park for burials (yes you read that right). Trenches will be dug for 10 caskets in a line.

It will be done in a dignified, orderly–and temporary–manner. But it will be tough for NYers to take. 9/

To recap: Nothing matters more in this crisis than saving the living. But we need to face the gruesome reality that we need more resources to manage our dead as well. Or the pain of this crisis will be compounded almost beyond comprehension. 13/13

In other words, this isn’t going to be a potter’s field, but it might be a while before people can be reinterred into normal cemeteries, too. Whichever park gets used for this necessity won’t return to normal service for some time — if ever. In fact, it might end up better used as a memorial to all of those in the Big Apple who died in the pandemic and a monument to the health-care workers who saved all of the others.

Part of the problem might not just be the pace of the deaths, but also regulatory obstacles to dealing with them. New York forbids out-of-state mortuaries from doing business in the state, but Andrew Cuomo has been considering an executive order to override the regulation:

In a move that could ease the passage of bodies from refrigerated morgues to cemeteries, Gov. Andrew Cuomo is considering allowing out-of-state funeral directors to work in New York under the license of an existing practitioner, a state official told POLITICO.

The potential executive order would dovetail with an existing effort by the state’s Funeral Directors Association to recruit upstate funeral directors to New York City to help their overwhelmed colleagues. Overburdened funeral homes are running out of space to process bodies, with the lockdown forcing them to abbreviate mourning rituals — an idea no one seems to relish. …

As of Thursday night, Covid-19 had taken 1,562 lives in New York City. The city’s four crematories can now work 24 hours a day. The city has established at least 45 mobile morgues to supplement the existing body storage capacity. The U.S. Department of Defense is reportedly sending dozens of mortuary affairs officers to help run the new morgues.

At Hart Island, the city potter’s field administered by the Department of Correction, the number of burials has increased from 30 or fewer a week to 100 a week, the department confirmed.

“If everybody stops dying for two months, we’ll still be working like this for six to eight months,” Cassieri said.

To those who wonder why the bodies aren’t just being cremated, it’s because that system is also backed up. The backlog goes more than a week at the established crematories in the state. Mortuaries want the state to start approving mobile crematories, known as “retorts,” but that process has been slow too. Hart Island’s management also claims that burial is quicker and more efficient than cremation:

“Hart Island has plenty of burial space and city burials are much faster than cremation,” said Melinda Hunt, president of the Hart Island Project, which advocates for greater access to the island. “[The Department of Correction] can bury 25 bodies in an hour on Hart Island. This will be the only option for many of the Covid-19 victims because there is not anywhere near enough capacity at crematoriums or private cemeteries. Funeral directors won’t be able to handle the number of bodies.”

Levine appears to have confirmed that the city has reached its capacity to deal with this normally. And as uncomfortable as that reality might be to discuss, we will likely have to discuss it for months on end — and not just in New York City.

Update: Or not, I guess:

This tweet has gotten a lot of attention. So I want to clarify: the is a contingency NYC is preparing for BUT if the death rate drops enough it will not be necessary. https://t.co/6wLO8qWtML

This is one reason why policy announcements on Twitter don’t work, folks. The time to say “contingency” is right up front, not two hours after announcing that the mass graves will “soon … start.”