Politico on Dem debate: Maybe they should just stop talking 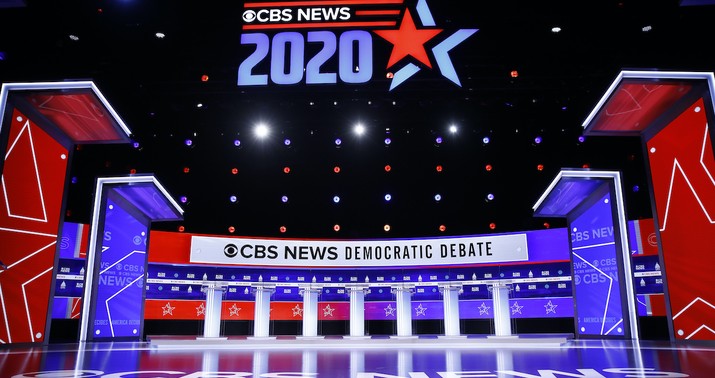 Should the DNC cancel all of the rest of the debates after last night’s apparent debacle in South Carolina? Hey, I did my part — I didn’t watch it, having a previous engagement in the evening. Politico’s analysts came to the conclusion that nothing much is learned in these debates, especially when handled so poorly by the moderators.

Could’ve told them that six or seven debates ago. Or even ten:

The Democratic debates finally reached double digits, and perhaps it’s time for less talking and more voting. With South Carolina casting its ballots on Saturday and California, Texas and many other states voting on Tuesday, this was the last debate before Bernie Sanders’ status as the new 2020 frontrunner is either cemented or halted.

POLITICO Magazine asked 15 experts, insiders, activists and political professionals to watch and tell us who won, who lost and how the race changed. This time, consensus was hard to come by. Did Joe Biden complete the comeback he began in Nevada? Or did Sanders, who seemed less composed than usual, maintain his pole position? Was Mike Bloomberg impressive, or just able to clear the low bar he set for himself last week? Is anyone listening to Elizabeth Warren, Pete Buttigieg and Tom Steyer? One point of agreement: Amy Klobuchar’s long streak of debate victories has been snapped. …

JENNIFER LAWLESS: … The criticisms were the same as usual: Sanders’ worrisome relationship with the NRA, Buttigieg’s billionaire donors, Bloomberg’s racism and sexism. The narratives were the same as usual: Biden has done the job; Warren has a plan to do the job; Klobuchar gets stuff done. And the content was the same as usual: The first 38 minutes of the debate focused on electability, and the rest could be summarized as an unfocused discussion that touched on a lot of important issues, but didn’t give any one of them justice.

This is a long way of saying that the debate changed nothing. Sanders entered the stage as the frontrunner and emerged with that status intact. Biden started out with an advantage among African American voters and sustained it over the course of the next two hours. And the other five candidates similarly walked off the stage in much the same shape as they walked onto it.

Did the debates ever provide much in the way of new information, though? Even in the first debate, what was the major reveal? It was Kamala Harris’ attack on Joe Biden over … busing, an issue of relevance as late as 1978 or so. These are nothing more than game-show events run by major media outlets designed to generate soundbites and zingers for entertainment. Attempting to shoehorn an answer as to how to pay for Medicare for All into a one-minute time limit is both an exercise in futility and a self-parody so precise that moderators still aren’t getting the joke.

Unless the answer is the truth, which is: you can’t.

Even in this dreadful format, to which both parties cling for no discernible reason, the CBS News moderators turned out to be particularly bad at it. The complaints on social media about a lack of control and decorum started early and continued throughout the event. Aaron Blake added CBS moderators to his list of losers from the debate, and added that the audience deserves a special mention as well:

There were two big problems here. One was that this was a complete free-for-all for much of the debate, with candidates talking over one another and with no one enforcing the rules. Playing loose can work when it means the candidates actually debate, but many times on Tuesday night, they were just allowed to talk past the moderators and game the system. The Washington Post’s Josh Dawsey put it well:

turn their mics off!

Second — speaking of gaming the system — was that the booing and cheering were out of control. There’s a reason many debates prohibit outward shows of support or dissent: because it encourages people to stock the room and play to the cameras. We don’t yet know whether that’s what happened Tuesday, but Bloomberg’s supporters were especially vocal, and Sanders found himself booed a surprising amount given he’s competing for a win in South Carolina.

Well, what did they expect? The moderators consistently attempt to turn these “debates” into gladiatorial combat, rhetorically speaking (for now! Wait until The Rock runs for president), and the candidates are responding to those incentives. If, as Michelle Bernard wrote for Politico, the candidates acted like “a team of 5-year-old kids peacocking for attention,” it’s because the format incentivizes them to do so, especially when the moderators spend more time posing than actually moderating.

The correct solution in the short run is Dawsey’s — turn all their mics off, including the media moderators. Both parties desperately need to disconnect their debate from media outlets, find debate formats that encourage substance over zingers, and focus on policy over personality. One does not have to witness the trainwreck in real time to predict what will inevitably happen when the tracks lead everyone right into each other.