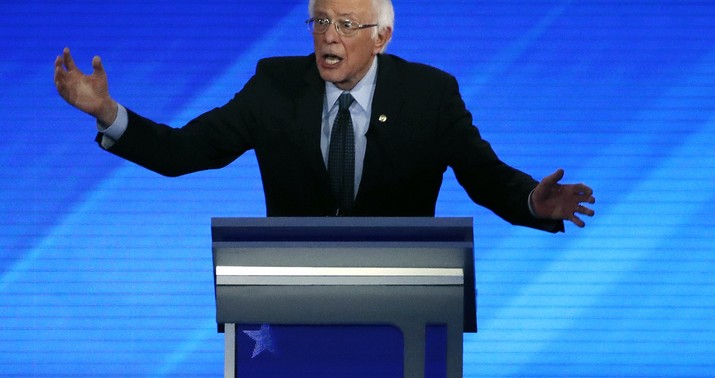 When the debate starts tonight, readers might be wondering, “How did an avowed socialist get the inside track on a major-party nomination?” They won’t be alone in asking the question. NPR and Marist conducted a poll to determine just how popular socialism might have become thirty-plus years after the fall of the Berlin Wall, and just a relatively short time since the collapse of Venezuela under Chavista rule.

Has socialism gotten popular? Not among the general electorate, but it’s becoming mainstream for one particular segment of it. Three guesses…

Asked about their impression of socialism, 28% of adults said they have a favorable view, while 58% said they had an unfavorable one.

If socialism is so unpopular with Americans, how can Sanders be on the rise in the Democratic primary? Because Democrats and, more specifically, progressives view socialism favorably. Half of Democrats said so, while more than two-thirds of progressives did.

Just 23% of independents, though, and 7% of Republicans viewed socialism favorably.

Gallup also recently covered this same ground, and found much the same result. Gallup out the question specifically into the context of an election choice, which the NPR/Marist poll doesn’t, and found that “socialist” is the least popular characteristic of a candidate for voters. Only 45% say they would consider casting a presidential-election vote for a socialist (“atheist” is the next least popular at 60%), while 53% say they wouldn’t even consider voting for a socialist candidate for president.

The NPR/Marist poll doesn’t ask this as a presidential-election choice but rather a favorable/unfavorable, but it’s still all bad news for Democrats. The only demos who have a more favorable than unfavorable view of socialism are Democratic partisan/ideological demos. Among the income, age, education, geographic, or ethnic demos, none give socialism a more favorable gloss, although it’s a virtual tie among African/Americans (40/41).  Even among “big-city” respondents, socialism favorability comes up short at 38/50.

Most importantly, though, it’s box-office poison among the voters that drove Democrats to a House majority in the midterms. Socialism gets rated 29/56 among small-city voters, 27/61 in the suburbs, 25/60 in small towns, and rural voters dislike it the most at 18/71. Combining small city and suburban voters, it’s 26/65 among the men and 29/51 among women. For that matter, it’s 25/66 among all men and 31/51 among all women. That has the potential of not just erasing small city/suburban gains for Democrats up and down the ballot, but also potentially reducing or entirely negating their gender-gap advantage, too.

Capitalism’s favorability isn’t the mirror image of socialism’s unfavorability, but it’s close. Interestingly, even Democrats slightly cheer capitalism, but only 46/43. Progressives disfavor it but only by single digits, 43/52. African-American voters disfavor it as well as socialism but by a wider margin, 37/45. Wide majorities in every age demo — even including Gen-Z and millennials (54/33) — see capitalism favorably.

There is a wider gender gap on capitalism overall, with men overwhelmingly favoring it (69/22) but women much less enthusiastic (45/36). That gap holds up in the partisan demos, too; even Republican women (65/18) are notably less enthusiastic about capitalism than Republican men (85/12). Nevertheless, capitalism is only unfavorable among Democratic women (35/50) — but surprisingly popular among Democratic men (65/30).

The clear impression left by this is that Donald Trump should benefit greatly from a Bernie Sanders nomination. The more he can cast the 2020 election as a fight for capitalism against socialism, the better edge he gains from the start. Democrats having to defend the outspoken socialist at the top of the ticket risk losing their House seats in the areas where they finally made inroads 16 months ago in the midterms. That’s especially true while Trump gets a 54/41 approval rating on the economy (56/38 among independents), and 66% of Americans say the economy is working well for them personally. Two-thirds of Americans are not going to vote to upend their personal economies to support a socialist that pledges radical change once elected.

It’s still the economy, stupid. And the economic ideology.