Let’s face it, none of these Dem Avengers will beat Thanos — er Trump, says … 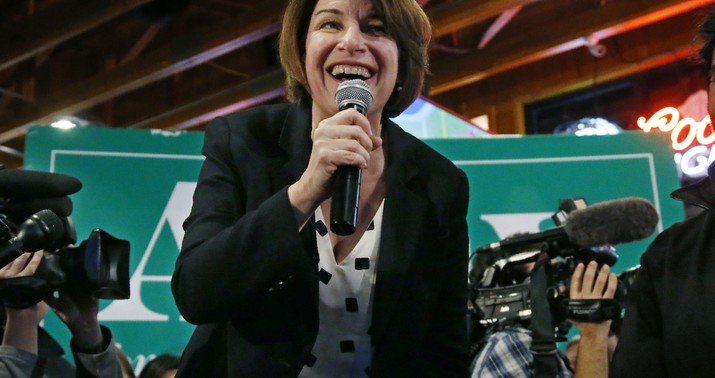 This is an obvious point, but it’s at least entertainingly delivered. As the results of the New Hampshire primary rolled in at CNN, Gloria Borger commended the Democratic presidential field for its “history making candidates,” but then noted that none of them seem terribly “transformational.” Van Jones expanded on those thoughts by using a Marvel Comics Universe analogy.

You can guess who Trump is in Jones’ set-up, but it fits his larger point that none of these Democrats look like they can wrest even one Infinity Stone from his grasp:

CNN’s Van Jones: feels like no Democrat candidate can go up against President Trump pic.twitter.com/sLZYIH7JCW

Maybe it takes time to build someone who looks like a transformational candidate. I mean, you would know a lot about that, David. But I think that in talking to people, they’re sort of trying to figure out that there isn’t anybody that they say, oh, my goodness, this is the person.

JONES: Or if they feel that way, it’s not sustained. So they feel like, everybody’s like having all this kind of like crushes, you know, it’s like back to junior high school and then — but nobody actually —

JONES: — gets engaged. The other thing is it just feels like everybody is partially able to take on Trump but not really. So it’s like, you’ve got the Avengers against Thanos, right? So, you know, if you get, Thor is this and you had a Hulk is that, and you had Amy is this, if you had Pete’s that, but there is no one candidate yet that feels that everybody feels like can actually go up against Thanos and beat him.

After this clip, Nia-Malika Henderson thinks Bernie Sanders has the organization to take on Trump, but that’s a bit of a change of subject:

HENDERSON: Yes. And in the meantime, you’ve got Sanders coming in. He’s obviously somebody who has run before, won I think 23 states before. And if you look at a candidate who might be able to eke this thing out, it could be him. Given that he’s got organizational structure in a lot of these states, clearly the ones he run in before. He’s got some standing there. He’s got an ability how to raise money, passionate supporters.

The rest don’t seem to have the kind of organizational skill that he has. So you know, listen, you shouldn’t have ignored him, but I think he’s certainly one to watch. And he’s got this idea of change, right? A lot of the voters who went to the polls in New Hampshire and Iowa, that’s what they want to see. That’s what propelled a Donald Trump last go round and that’s what he embodies for a lot of these voters.

Organizational does not mean transformational, though. Barack Obama was both; Sanders might be organizational, but that’s it. He’s not transforming the Democratic Party, at least not yet. If he does transform it into the Democratic Socialist Party, though, his transformational quality might ensure that the party remains in the minority for the next few cycles. Be careful what you wish for, in the words of an ancient Tony Stark saying.

After her surprise surge to third last night, some are considering Amy Klobuchar a potentially game-changing candidate. Not so fast, I argue in my column for The Week. Her brand of Minnesota Nice might be a change of pace, but most voters will want to stay the course in this economy:

Like most politicians in Minnesota and the upper Midwest in general, Klobuchar succeeds by projecting an image of calm affability. Based on a couple of personal interactions with her, I’d argue that it’s a fairly genuine image rather than an affectation. That would create a strong contrast on the stump between her version of Moderate Minnesota Nice and Trump’s Outer Borough Tough Guy, which might have provided Democrats an advantage if Trump was running for his first term in office.

That, however, is not the case. Trump will likely run mainly on two themes in arguing for a second term. First, he needs more time to “drain the swamp,” i.e., reduce the influence of longtime Beltway figures like Klobuchar, Biden, or Sanders. Second, the economy is so strong that changing horses in midstream makes no sense, especially when the alternative is the socialist or socialist-lite agenda being pushed by whomever Democrats nominate. …

Klobuchar’s appeal in a campaign against Trump would be a return to status quo ante normalcy. If voters become anxiety-ridden about the present state of affairs, they won’t want a revolution in the Bernie Sanders sense, but a nostalgic turn toward a pre-Trump technocracy to rescue the country from chaos. Under those circumstances, Trump’s chaos-agent qualities would play against him, and Democrats would be well advised to nominate an establishment figure who can soothe panic.

The polling from Gallup this month shows record optimism about the economy and people’s personal prospects in the coming year. Under those circumstances, voters will want anything but “transformational” in November. That doesn’t mean Trump can’t lose, but it will probably take an economic shock to make him vulnerable. And even then, that won’t benefit Klobuchar, who’s never run anything other than a prosecutor’s office.