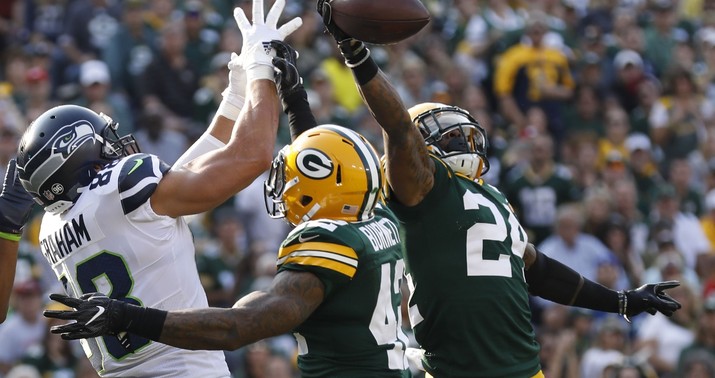 Ed: Can a 1-1 day be called a rebound? I managed to move to 2-4 in playoff picks so far, which isn’t great but leaves me with the task of writing today’s open thread. If there was going to be a ground-shaking upset, why couldn’t it have been in the opening game yesterday rather than with the Ravens’ surprise exit? Not only would that have made my Viking-fan pals a lot less gloomy around the Twin Cities today, we’d still have Lamar Jackson mixing things up for another week, at least. Now the one team that looked most unbeatable at the end of the season will have another off-season to figure out what went wrong … this time.

Jazz: So much for that. After my thrilling “success” of going 1-1 last Sunday, I switched back to another swing and a miss yesterday. My longshot bet on the Vikings didn’t pay off and then I apparently cursed the Ravens. I didn’t even bother watching the late game and went to bed confident that Baltimore would win a boring, lopsided game. This postseason is shaping up to be a year where everyone just has to expect the unexpected.

Ed: Today’s games show more promise for upsets, although it will still be tough to pick against the home teams. Today starts out with Texans at Chiefs (3:05 pm ET, CBS) and more than a couple of question marks. Last week against the Bills, the Texans dug themselves a 16-point hole before climbing out of it in the second half, but that kind of play would likely result in a 35-point hole against Patrick Mahomes and KC. Deshaun Watson made a brilliant play to win the game in OT, but his numbers last week weren’t exactly spectacular — 20/25 for 247 and a TD, while taking seven sacks. The Texans gave up 425 yards to the Bills, who had the 24th-ranked offense during the regular season. They’re facing the 6th-ranked offense today, 5th on points per game, whose defense was ranked 7th on points allowed per game. We found out last week that you can’t count out the Texans until time runs out, but I suspect the last sands of the hourglass will come today. Chiefs 35-23 over the Texans.

Next up we get a tougher game to pick with Seahawks at Packers (6:40 pm, Fox). Both teams are coming into the game dinged up, but the injury list contains two of Russell Wilson’s offensive line as either questionable or doubtful. Green Bay’s defense is already stingy, and that won’t help matters. Both defenses get turnovers; they’re tied for third overall this season with a +12 differential. (The top two teams lost last weekend, though — New England and New Orleans). Seattle’s defense gives up five more points a game, and the offense barely got by Philadelphia’s D last week, only scoring 17 points.

This one looks like a game in which home-field advantage will make the difference. Seattle was 7-1 on the road this year, but Green Bay was 7-1 at home too, and it’s gonna be cold out there. It’ll be 22 degrees with wind chill taking it to 17 degrees, an environment the Packers know well but Seattle doesn’t. They only managed 64 rushing yards last week, so it will be on Wilson’s shoulders, and the Packers’ D was third-best in completion percentage, 59.7%. Seattle’s D was ranked 21st at 64%. This one should be a close game, but I’ll pick Packers over Seahawks 27-21.

Jazz: The Texans have a QB who’s not afraid to run with the ball when he has to, adding another element to their offense that’s confounded some very respectable defense. (He ran more than a dozen times against the Bills.) But even with those options available, beating the Chiefs at home is going to be a daunting task. While I hesitate to say this after that Raven’s game, I just don’t see the Texans having enough in the tank to stop the Chiefs, who may now be one of the top picks for a Superbowl ring. I’ll go with the Chiefs over the Texans 34-26.

For the late game, I basically came down to flipping a coin. Seattle didn’t exactly shine in their win last week, though they managed to get the job done. But Green Bay hasn’t exactly been looking like the team to beat either. Particularly when the game is being played at Lambeau, under the lights and in freezing temperatures, this should be Green Bay’s game to lose. But the coin flip says what it says and I say this season of the unexpected will continue to deliver surprises. I’ll go with the Seahawks over the Packers 24-17.

Stunning: Dan Bongino Reveals FBI 302 from May 2017; FBI Team Tells Rod Rosenstein the President Is NOT a Suspect

Biden: All right, so maybe I didn’t get “arrested” in South Africa while trying to visit Nelson Mandela

“I guess I wasn’t arrested, I was stopped. I was not able to move where I wanted to go.”