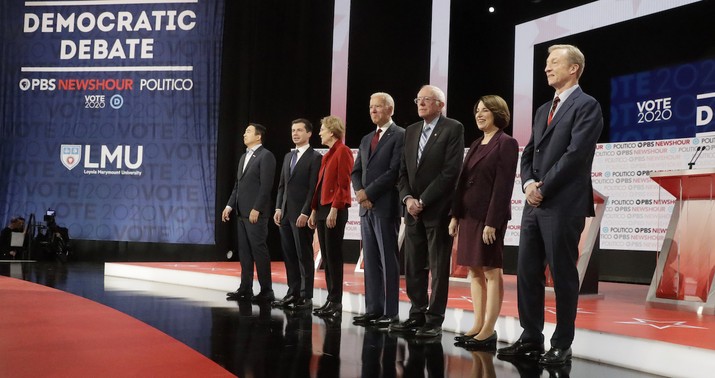 As voters get closer to making their choices in the Democratic presidential primaries, they seem to be less enthusiastic about it than ever:

Last night’s Democratic debate, which inevitably dealt with the recent impeachment of President Donald Trump, drew just over 6 million total viewers for PBS and Politico, according to Nielsen figures. Topics such as the economy, climate change, racism, Afghanistan, and taxing the wealthy were also on the agenda.

That total, which counts the PBS broadcast and the simulcast on CNN and CNN en Español, makes it the least watched debate so far in the current cycle, only just behind the previous MSNBC debate which drew 6.5 million. Last night’s squaring off reached more than 2 million viewers across PBS stations nationwide, and was seen on CNN by just over 4 million people.

The only possible positive explanation is that voters have already made their voting choices for the primaries. That doesn’t make too much sense, given the volatility in polling for Elizabeth Warren, Pete Buttigieg, and Bernie Sanders over the last couple of months. It’s tough to aggregate polling on “not sure” as RCP doesn’t track that response, but the NBC/WSJ poll this week showed 5% unsure, only down slightly from 8% in July when millions more tuned in to see a debate. Similarly, the CNN poll series shows 5% unsure at the moment, but only 9% unsure in June. And the latest Quinnipiac survey shows 11% of Democratic voters are still unsure, the highest level since September. In this poll, 61% of those who do support a particular candidate say they still could change their mind, too.

So it’s not that there’s no more voters left to convince. John Hinderaker thinks it’s a measure of voter enthusiasm, one that should strike fear into the hearts of Democrats:

You can’t read too much into TV ratings, obviously, but there is an obvious lack of enthusiasm for the Democratic candidates. The fact that Slow Joe Biden, now apparently in his dotage, continues to lead the pack, tells you all you need to know. No wonder ratings are dropping.

Everything changes, of course, when the voting starts. Contenders turn into pretenders. We will see how things shake out when delegates are actually being selected, but the fact that the Democratic contenders are inspiring so little enthusiasm is a problem that won’t go away.

Perhaps voters have gotten burned out by 24×7 impeachment in Washington, too. The ratings for these debates began to seriously dive around the time that Ukraine-Gate broke out. That’s correlation, not causation, of course, but it’s at least as good as the enthusiasm argument. And those two are clearly not mutually exclusive, either. If there is more of a link than just mere correlation between impeachment and a lack of enthusiasm for debates and these Democratic contenders, Nancy Pelosi might want to hide those articles of impeachment until 2021. Or 2025.

All of these might be factors, but the rerun factor is almost certainly the main problem. How many times can a group offer the same television show over and over again with only slight changes in venue and context? No one gets away with that for long. Well, not unless they’re named Lifetime Movie Channel or the Hallmark Channel, that is, but at least those feature pleasant looking and sounding people locked into (usually) nicer versions of Groundhog Day. Democrats have Bernie Sanders, Elizabeth Warren, and Joe Biden in constant debate-stage reruns. ‘Nuf said.

Looks like viewers took my advice after the last debate:

The Democratic National Committee continues to insist on a full-stage format for these debates that ends up transforming them into game shows, and the fifth debate was no exception. And that is why these events will have less and less effect on the poll standings of the participants. Voters have seen this all before, over and over. This debate won’t change many minds.

That’s not to say the participants in these debates don’t bear some responsibility for the lack of substance and educational value. They’ve all already been introduced to audiences at earlier debates, and yet moderators kept asking questions that one would expect from a first appearance, such as why they are running for president. When asked more specific questions about policies or previously announced plans, candidates asked viewers to read their web site while offering up canned sound bites from their stump speeches. …

Voters saw nearly nothing at the fifth democratic debate they hadn’t seen at other debates or could have easily assumed about the myriad and generalized Democratic Party agenda. Even Biden’s stumbles and gaffes have become routine enough that this particular performance will likely only have a small, temporary effect on his polling and fundraising. We can all look forward to the December debate, when most of these same candidates will be back to answer the same questions with the same canned responses. If voters want to know anything else, go to the contenders’ websites … and save themselves the bother of tuning in.

Told you so! (I don’t hate saying that at all.) And while it’s clear that the DNC isn’t clever enough to do anything about this in 2019/2020, the RNC had better pay attention for 2023/24. Time to come up with a new format and a new way to showcase your candidates, political parties.

Biden: I never said South Carolina was my firewall

Narrator: He totally said it was his firewall multiple times