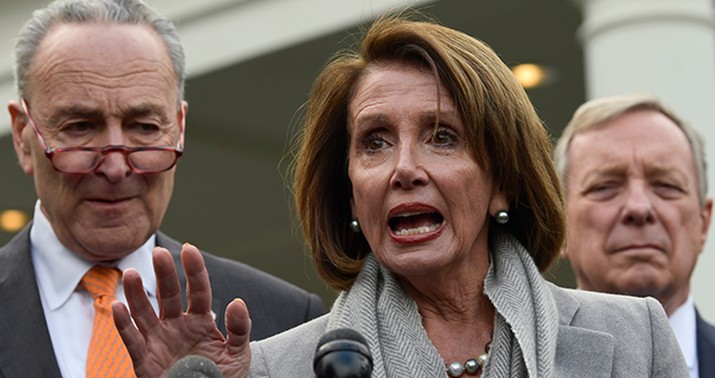 How can Senate Democrats hope to get any leverage over the majority when the Impeachment Express arrives at their doorstep? According to The Hill, they haven’t figured out an answer to that conundrum, except perhaps to kick that can down the road a little more. Until they can figure out how to get enough votes from Senate Republicans to demand a drawn-out trial and testimony from former and current Trump administration officials, they would prefer Pelosi delay a final vote on the articles of impeachment:

Senate Democrats are quietly talking about asking Speaker Nancy Pelosi (D-Calif.) to hold articles of impeachment in the House until Senate Majority Leader Mitch McConnell (R-Ky.) agrees to a fair rules package for a Senate trial.

Democratic senators are concerned by talk among Senate Republicans of holding a speedy trial without witnesses, which would set up a shorter time frame than when the Senate considered President Clinton’s 1999 impeachment.

They want to hear from Trump’s advisers and worry that if they don’t use their leverage now, they’ll have little say over how a Senate trial is run.

“If we don’t agree on a set of rules before the articles arrive over here, I think we’re cooked. I think McConnell has his people totally in line. It will be a procedural thing,” said one concerned Democratic senator.

Well, if that’s what will cook Senate Dems, they had better start basting themselves. The likelihood of Pelosi delaying an impeachment vote is roughly nil. House Democrats rushed through the investigatory process for the express purpose of getting a vote in before Christmas. They don’t want impeachment dragging on their House majority any longer than that, because to push this off into 2020 risks their survival.

Besides, the longer Pelosi waits, the more defections she will get in her caucus. Moderates in Trump-friendly districts are looking at this trend line and quailing at the thought of defending an impeachment vote to their constituents:

After weeks of controlling the narrative and getting lots of sympathetic coverage in the media, Democrats haven’t moved the needle at all in national polling. That’s even worse in swing states and swing districts, and House Dems know it. The longer this drags out, the more nervous they will get — and the more defections that arise, the more it undermines whatever credibility this impeachment process still has.

That also sets up a catch-22 for Senate Democrats. A delay might give them more time to negotiate with a few unhappy Senate Republicans, but the more that delay undermines the final vote, the more credible a short trial will be — which is what Senate Republicans now want:

Senate Republicans are starting to coalesce around the idea of a shorter Senate impeachment trial — one that, contrary to President Donald Trump’s stated desire, wouldn’t include witnesses.

The layout of the Senate trial is still under deliberation and leaders have been clear that no final decisions about strategy or structure have been made, but in interviews over the last several days, GOP senators say they are beginning to see the benefit of keeping the process short, leaving out witnesses and instead, simply laying out the facts with a presentation from House managers and the White House.

“I would think the consensus would be let the House make their case, let the Senate make their case and then put forward a motion to vote,” said Sen. Ron Johnson, a Wisconsin Republican.

The Washington Post corroborates CNN’s reporting with its own on-the-record sources:

Senate Republicans are coalescing around a strategy of holding a short impeachment trial early next year that would include no witnesses, a plan that could clash with President Trump’s desire to stage a public defense of his actions toward Ukraine that would include testimony the White House believes would damage its political rivals.

Several GOP senators on Wednesday said it would be better to limit the trial and quickly vote to acquit Trump, rather than engage in what could become a political circus.

“I would say I don’t think the appetite is real high for turning this into a prolonged spectacle,” Senate Majority Whip John Thune (S.D.), the chamber’s ­second-ranking Republican, told The Washington Post on Wednesday when asked whether Trump will get the witnesses he wants in an impeachment trial. “Members want to deal with the arguments, hear the case and hopefully reach a conclusion.”

That should be what Senate Democrats want, too, especially since there’s zero chance of a removal, and almost zero of even a majority supporting the impeachment now. Name one Senate Republican who will vote to convict while House Democrats are bailing on a vote to impeach. The sooner this disappears, the better it is for everybody.

In fact, the whole idea is so absurd that it almost seems like a briar-patch strategy from Senate Democrats, trying to push Mitch McConnell into a short trial by convincing him they want a long one. Sure, they could try to enforce subpoenas for John Bolton and Mick Mulvaney, but Senate Republicans aren’t going to do that without forcing testimony from the original whistleblower and Adam Schiff’s staffers who coordinated with him/her. For as long as the trial lasts, Republicans will control the investigation and the narrative, and Senate Democrats got a taste of what that looks like yesterday in the Senate Judiciary committee hearing with Michael Horowitz.

Do Democrats really want four or five weeks of that, so much so that they will pressure Pelosi to delay what she deliberately rushed? Count me as not buying it.

Trump: Man, Fox News is as bad as CNN and “MSDNC” these days

Ron Johnson to Bolton: How about you open that yapper of yours and give us some clarity on this Ukraine thing

We're Gonna Need Shovels: Joe Biden Names His Dream VP, and It's Probably the Smartest Idea I've Heard From Him

Bellwether to Blowout: Texas House District Gets Redder to Lead Off 2020 Elections

“…two programs are set to add $103 trillion to the national debt.”

Best of luck, though

No, Dianne Feinstein isn’t leaning towards acquitting Trump. But it sort of sounded that way at first.

“The people should judge.”

“I cannot think of a case more disturbing than this one.”

Accused Hanukkah stabber may not even stand trial

“One or more senators may end up splitting their votes…”

“I, for one, believe that there’s some gaps, some ambiguities that need to be cleared up.”