Viewers vote with their feet in Wednesday’s Democratic debate 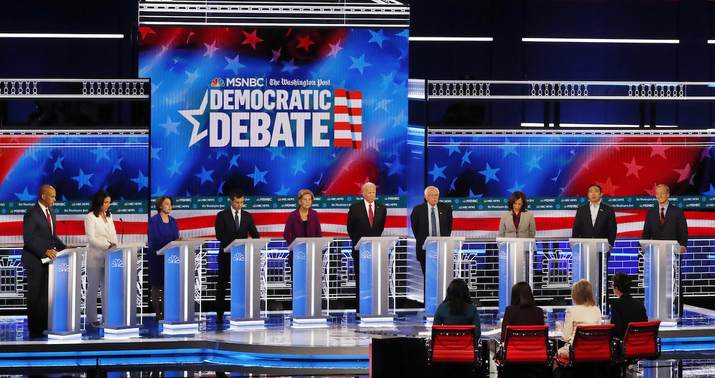 It’s not just impeachment that Democrats can’t sell. The fifth Democratic presidential debate drew the lowest viewership of the series, despite all of the drama in Washington during the day. Or perhaps because of it, CNN argues.

Regardless of the reason, ratings cratered by 20% over the previous debate, which already wasn’t a ratings bonanza:

Wednesday’s Democratic debate, the fifth this year, was the least-watched debate of this election cycle. The ratings for MSNBC were down more than 20% from last month’s match-up on CNN.

One obvious reason: The televised impeachment hearings earlier in the day sucked all the political oxygen out of the room. Some viewers who spent all day watching House testimony probably didn’t want to spend all night watching a debate.

On the other hand, cable news viewership levels have been significantly elevated by the hearings, so that theoretically could have benefited MSNBC. But it didn’t.

About 6.6 million people were watching between 9 p.m. and 11:15 p.m. ET, according to overnight Nielsen ratings.

Did people burn out during the hearings earlier in the day? CNN Business describes that as an “obvious” reason, but that seems less than obvious. The last I heard, having a big event as a lead-in didn’t tend to hurt television ratings for the next show. Voters in the Emerson poll show high engagement with the hearings across all partisan demographics, but especially among Democrats, 75% of whom either watch or follow the hearings. If they’re that engaged on impeachment, why wouldn’t they be equally engaged on the effort to defeat Donald Trump next year?

Washington Post media critic Erik Wemple called it a “mediocre” result, but claimed that those who tuned out missed something valuable:

MSNBC/WaPo debate scored a mediocre 6.6 million viewers last night, continuing a downtrend in viewership for these events. Lotsa people, in other words, missed an informative and expertly moderated affair.

Actually, viewers didn’t miss out on anything. Having watched the debate myself, I can confidently state that the only significant development of any lasting value for voter choice was the acceleration of Joe Biden’s collapse of coherence. As I wrote in my analysis at The Week, the debate essentially proved why people shouldn’t bother to watch:

For instance, can anyone identify without a transcript which candidate asserted that we must “unify the country”? Which candidate insisted that we have to get money out of politics? Who told the audience that Democrats are “focused on tomorrow”? Which issue(s) are “not a Democrat issue or a Republican issue”? How about identifying the person who plans to “bring this country together” as opposed to the one who will “restore the soul of this country,” or the one who wants to “heal the nation”?

It’s a trick question. Nearly everyone on stage in Atlanta on Wednesday offered variations of these same clichés to moderators trying to squeeze in as many topics as possible.

The fault for this does not lie entirely with the candidates, or the questioners, or even with the television cameras or the live audiences. The Democratic National Committee continues to insist on a full-stage format for these debates that ends up transforming them into game shows, and the fifth debate was no exception. And that is why these events will have less and less effect on the poll standings of the participants. Voters have seen this all before, over and over. This debate won’t change many minds. …

Voters saw nearly nothing at the fifth democratic debate they hadn’t seen at other debates or could have easily assumed about the myriad and generalized Democratic Party agenda. Even Biden’s stumbles and gaffes have become routine enough that this particular performance will likely only have a small, temporary effect on his polling and fundraising. We can all look forward to the December debate, when most of these same candidates will be back to answer the same questions with the same canned responses. If voters want to know anything else, go to the contenders’ websites … and save themselves the bother of tuning in.

The ratings showed that most Democrat voters didn’t need my advice to make the correct decision.

Some might take this as a sign of flagging enthusiasm for the candidates themselves. The debate ratings decline, which had begun after the first debate in June, could have been part of the decision by Michael Bloomberg and Deval Patrick to jump into the race, even with two dozen candidates already in it. If so, it’s a stretch; the lack of enthusiasm is almost certainly linked to the debates themselves. Most of the frontrunners, save Biden, are still seeing strong fundraising numbers. It’s just that television viewers aren’t interested in re-runs.

Republicans can afford to gloat over this development now, but they’d better be taking notes. In four years, the GOP will have a wide-open primary and likely a similar-sized field to succeed Trump, or to challenge a Democratic incumbent if Trump loses next year. The RNC used this same exact format in the last several cycles despite repeated complaints that it was corrosive to candidate credibility and nothing more than a zingerfest. The DNC should have learned a lesson from that in 2016 and didn’t. Will Republicans learn the lesson this time and come up with a new and better process for highlighting its candidates — while they can?