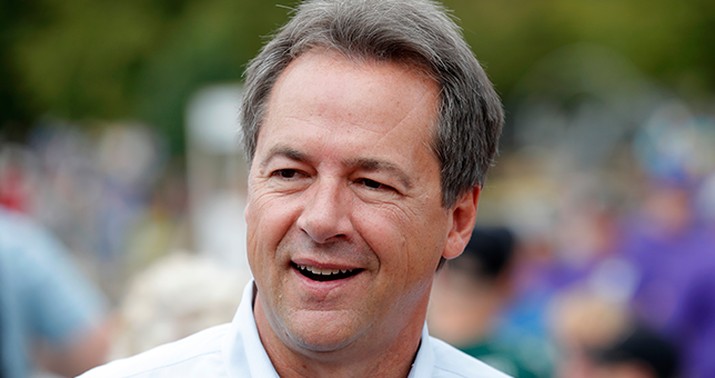 The answer to this question is undoubtedly no — but it might still be pretty entertaining. Joe Biden’s sudden weakness, polling and otherwise, has thrown a scare into the party’s beleaguered moderate wing, and Politico’s Marc Caputo and David Siders explain this as the context of the potential entries of Michael Bloomberg and Deval Patrick into the 2020 mix. The rest of us might not necessarily consider them much different than what’s already in the mix, however:

The party’s moderate wing has suddenly produced back-to-back threats of Michael Bloomberg and Deval Patrick entering the presidential primary, revealing its determination to have an imposing presence in a race shaped by unrestrained liberal policy prescriptions and candidates.

The two potential candidates are expressions of the deep concern voiced by Democratic Party insiders and donors that the moderate frontrunner in the race, Joe Biden, is flawed and in danger of losing to a progressive alternative, Sen. Elizabeth Warren.

At a bare minimum, Bloomberg and Patrick stand to complicate — and potentially lengthen — the campaign.

“The combination of Deval Patrick and Bloomberg entering the race blows up the primary,” said Quentin James, executive director of The Collective, a super PAC that supports African-American candidates.

The first question to be asked is this: where are the moderates? Bloomberg spent most of his career as New York City mayor as an activist nanny-stater, and has spent most of his money afterward as a gun-grabber. Deval Patrick was a Barack Obama progressive as governor of Massachusetts, right before he disappeared into Bain Capital to participate in what progressives called “vulture capitalism” in 2012. Massachusetts is hardly known as a state where Democrats practice moderate policies; even Republicans there put the center somewhere between Elizabeth Warren and Bernie Sanders.

If Bloomberg and Deval are the moderates’ last hopes, the center has well and truly disappeared in the Democratic Party.

One might as well explain this as the wealthy donor base attempting to seize direct control of the primary. Tom Steyer certainly made that attempt himself, even if he turned out to be spectacularly inept at it. Bloomberg will likely have more success — he might be able to fund a grassroots organization based on his existing Everytown gun-control group — but it’s tough to see the populist progressives controlling the party at the moment falling in love with one of the biggest billionaires in the world. Especially if he’s coming in to buy the nomination, which might play hob with their EAT THE RICH! message.

Patrick might have an impact, but less on his own chances than on Biden’s, Politico argues:

Ehhhh, maybe. Black voters already have those alternatives with the candidates Politico mentions, and they’re not marching out from behind Biden now. Patrick’s decision to sell out with Bain won’t make him any more attractive to those voters, let alone with the progressives who might resent that even more than they would resent Bloomberg. That’s why Patrick demurred in December, and why an entry into the race now would only prove that decision all the wiser.

If moderates really wanted to stage a revolt and shore themselves up in case of a Biden collapse, they already have a candidate in the race for that. Steve Bullock routinely wins in Montana in a deep-red electorate, has a track record of solid moderate governance, and doesn’t come from the Beltway. Bullock is the big missed opportunity for Democrats this year, a candidate with the potential to bridge the gap between the Democratic Party’s factions.

But hey, let’s see the big establishment revolt with Bloomberg anyway! I still have a little popcorn left to pass.

SCOTUS to Dems: Your ObamaCare problem is not our emergency

C’mon: Did McConnell really “back down” by tweaking the rules of the impeachment trial at the last minute?

The Spin Is Real: Biden's Team Explains 'What Really Happened In Ukraine'

Politico: Rep. Adam Schiff may have mischaracterized a piece of the Lev Parnas evidence

“it’s a grave and obvious attack on a free press…”

Politico: Could the Senate trial be over by the State of the Union speech?

“Do the American public want to see an end to the trial so quickly? I think that becomes a political issue.”

Schiff to Senate: Many Americans, maybe most, think you’re not going to hold a fair trial, you know

“There is no more hope for going forward.”

Guess how much San Antonio has spent to keep Chick-fil-A out of the airport?

We must fight the evil forces of tasty sammiches

Perdue: We’ve got the votes “right now” to acquit Trump from the Dems’ Kavanaugh trap

Scott: Witness debate “has everything to do with removing at least four senators from office who are Republicans.”

The media and the online left sees another ‘punchable’ face.