Moyers: For the sake of the nation, PBS must go wall-to-wall on impeachment hearings 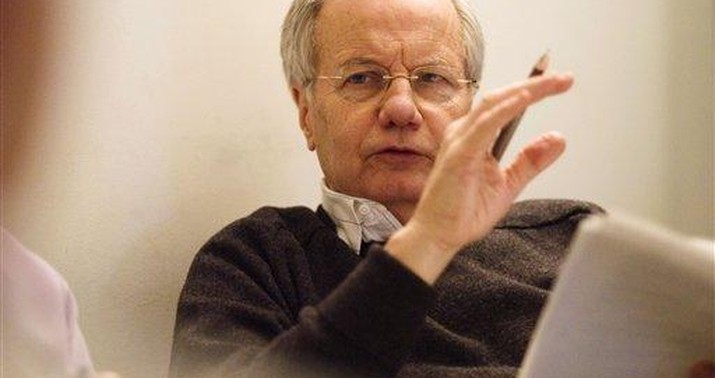 Can Joe Biden bring his record player, too? Former PBS anchor Bill Moyers and his colleague Michael Winship launched a full-court press to demand that the network repeat its coverage of the Watergate hearings for Ukraine-Gate. Not only does Moyers want PBS to cover it live, he also demands that PBS rebroadcast the hearings in their entirety in prime time every night, pre-empting all of the other programming PBS offers for weeks or possibly months.

Nothing less than the future of our nation is at stake, Moyers declares:

When PBS takes a stand, it can make a difference. Its contributions to arts, science, and history programming are well known and justifiably celebrated — witness Ken Burns’ recent country music series, for example. There are provocative prime time films from Independent Focus and POV as well as investigations by Frontline.

But since the Watergate era, PBS executives consistently have been harassed by right-wing vigilantes and under constant threat from partisan budget-cutters in Congress and the White House, prompting them always to be looking over their shoulder, fearful of arousing controversy. But on this issue of the prime time rebroadcast of impeachment hearings, as we saw recently when a wedge of House Republicans forced its way into closed hearings, perhaps even hardline conservatives will applaud giving the public plenty of opportunity to see and judge for themselves! (Note: We won’t hold our breath.) …

In our New York Times ad we recall that when President Lyndon Johnson signed into law the Public Broadcasting Act of 1967, he noted that public media might well become “a replica of the old Greek marketplace, where public affairs took place in view of all the citizens.” Privately, he reckoned that would include the dirty linen. So be it: We can’t save the best of constitutional liberty without seeing — and stopping — the worst that can happen to it.

So, we implore our old friends and colleagues at PBS to “… pull out the stops once again, and for the sake of the nation, throw away the schedule and air the Trump impeachment hearings in prime time. Who wins? Democracy – and viewers like you.”

This might well be true … if this was still 1974. Forty-five years ago, all most Americans had were BPS and the Big Three networks for national news coverage, plus the newspapers and magazines that gave the dead-tree version a day or more later. Even in Los Angeles, where we had a more robust independent market than most other areas, all we had were the alphabet networks and four independent stations on VHF, with the PBS station on the lower range of UHF.

Guess what Moyers never mentions in his cri de coeur? C-SPAN and DVRs. C-SPAN got introduced a few years after Watergate (1979) as cable-television access spread from rural areas to suburbs and cities.  They now feature multiple channels on most if not all cable providers, plus have terrestrial and satellite radio penetration. They routinely rerun their morning and afternoon content in prime time too, even when it’s not particularly noteworthy.

The Washington Post never mentions C-SPAN in its follow-up today, too. Meagan Flynn just skips right over the forty years to report on how PBS’ decision has “incensed some of broadcast journalism’s most veteran reporters”:

After PBS announced Friday that it would only replay the impeachment hearings live broadcast on PBS WORLD and digital platforms, Moyers and Winship were flabbergasted as to why the network did not feel the same obligation now as it did then.

The spokeswoman for PBS told The Post, as well as Moyers and Winship, that “we live in a vastly different media universe than we did 45+ years ago,” one that is now an “on-demand world.”

But the journalists argued the new media universe should not matter.

“By thus failing to offer an alternative to the profit-hungry commercial networks in prime time, we suspect most Americans will miss the hearings in the day and at night many will go to their respective partisan corners on MSNBC or FOX,” they wrote.

Our friends at PBS are saying they will not carry the hearings in prime time — period. Instead, they will throw them in the river and viewers can dive for it, because that’s what WORLD is, a place where important programs are sent to die. Raise your hand if you have ever found a show on World? How in the world — no pun intended — does it serve democracy to hide the hearings from people who come home from work to see them but don’t have cable, satellite, and internet access?

Ahem. There may be people who don’t have any of those three, but they are undoubtedly small in number … and most likely avoiding them by choice. If they are that concerned about these hearings, maybe they can find ways to access them without relying solely on PBS.

You know, by tuning in the broadcast networks, for instance:

ABC, CBS, NBC and PBS will set aside scheduled programming next week to cover the House’s first open impeachment hearings on President Trump.

The cable news networks CNN, Fox News Channel, MSNBC and CSPAN will also provide live coverage. The broadcast networks’ announcement Friday that they would televise the hearing, however, gives the event an extra measure of exposure and weight with the public.

The very rational reason PBS has not chosen to follow its 1974 strategy is that it’s not 1974 any more. At that time, PBS was the only resource available for that content, which gave them a competitive edge over the commercial networks. Why copy what C-SPAN will already be providing to a near-saturation level of household access? It’s not necessary for anything other than Bill Moyers’ sense of nostalgia, and his hysterical approach to the topic at hand.

The best description comes from the Post’s comments on their coverage. Moyers, the commenter concludes, is “the guy looking in the wrong place for his car keys because the light’s better there.” Or his buggy whip.