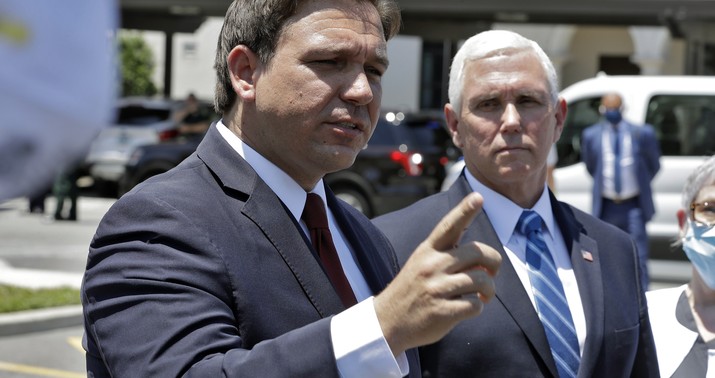 The press seems desperate to bring down DeSantis and the state.

On one of his nightly Delusional News Hour broadcasts CNN’s Chris Cuomo had on former Florida Health Department employee Rebekah Jones. The subject was regarding a favorite news item in the press regarding the state and its Coronavirus response and success in dealing with the viral outbreak, namely that data reporting on the pandemic in Florida had been manipulated to show favorable results. To say this is a highly questionable path for Cuomo to go down is downplaying the problems here.

"Asking me to delete data, and hide information, and make it publicly inaccessible was a bad decision."

The very first thing to note – Jones praises Florida’s response and its numbers regarding the pandemic. So where is the need to ”manipulate data’’, while she is attesting to its success? If you have not seen the clip of Florida’s Governor Ron DeSantis justifiably ripping into the media last week give yourself the chance to watch. This is 90 seconds of delightful catharsis, as he gives a mic drop and a football spike in one soundbite. The media have been working hard to make DeSantis into a dire figure over his handling of the COVID-19 outbreak here in the state, but their predictions have been unraveled by the stats.

In his speech DeSantis opened with a response to a question about allegations that his state was sporting such impressively low infection statistics as a result of data manipulation. This is the story the press loved, even though the facts do not support the claims. What is being served to the public is a variation of the communist adage of ‘’You show me the man, and we will find the crime’’, with this being altered to ‘’When we see the narrative being busted we will find the conspiracy.’’ In this case there is the perceived appearance of stats being changed, a martyred employee who was fired for speaking out, and a GOP led legislature hiding the truth. The press seemed to think the story is so good that investigating it further is not needed.

As it goes, in the first week of May, Rebekah Jones was removed from her position as Geographic Information Systems manager at the Florida Department of Health. Jones was leading the team that ran the states coronavirus information portal dubbed The COVID-19 Dashboard. Jones has stated the reason for her removal was her refusal to alter the data being offered on the dashboard, as allegedly instructed to do. Broken by the news outlet Florida Today, she said the reason for the request was to facilitate the desire to open the state back up, and favorable data was needed.

Across the media spectrum her story was repeated, and tellingly almost all the news outlets told the story in a uniform fashion. Jones was said to be the ‘’architect’’ of the web portal (she wasn’t), was described as a scientist (she isn’t), and is essentially a whistleblower when she called out falsified data (she didn’t). The details need to be hashed out to show where the press failed to do its job — or more likely, refused to do so.

While Jones was the primary operator of the site, calling her the ‘’architect’’ is inaccurate. The site was built off of what can pithily be called a template from a service provider, a baseline portal that is used by a number of other entities for similar use. Jones effectively ‘’personalized’’ the structure to suit Florida’s, although she seems to be the one telling other news outlets she had constructed the site entirely.

The other note, as described in the Tampa Bay Times, Jones is not a ‘’scientist’’, as many described. She attended school first at Syracuse, got her Masters at Louisiana State, and then received her PhD in geography at Florida State. So while she is technically a Doctor, and one well suited for the mapping services at the Dept. of Health, she is not a trained medical professional.

The Tampa Bay Times in reporting on the details managed to supply the actual facts — all while leaning into the same narrative presentation of Jones as a martyred truth-teller. We have to dig deep in the article to arrive at what led to the firing, and it differs greatly from the narrative. The first thing to note is that there was no removal of any information regarding cases nor amounts of COVID-related deaths. In other words, the numbers were never cooked.

What was at issue was a directive delivered to Jones to suspend the operational aspect of a data set involving dates of some metrics being reported. According to internal emails reviewed by the Times, Department of Health I.T. Director Craig Curry emailed Rebekah Jones just before 5 p.m. on May 4. He cited Dr. Carina Blackmore, director of the Division of Disease Control and Health Protection.

“Per Dr. Blackmore, disable the ability to export the data to files from the dashboard immediately. We need to ensure that dates (date fields) in all objects match their counterpart on the PDF line list published,” Curry wrote.

This would indicate that the superiors at the FDH were looking to have their data showing the specific dates of reported symptoms of possible cases properly displayed on the site so it was accurately correlating with the data they already collected. The only portion of the site referenced as showing any changes was a column involving these dates. The Times indicates this field was showing as blank for just over one day, before it once again displayed this data.

This raises a number of questions. First, how is the desire of officials to see to it that the website correctly reflected dates of reported symptoms in their sourcing constitute ”manipulating’’ or ”deleting’’ of data? Second, if the only change ever found involved getting the date of reported symptoms corrected, how is that interpreted as, ”manually change data to drum up support for the plan to reopen the state’’, as Jones mentioned to a local news channel?

It is quite obvious the press is looking to get the narrative established that Florida is supposedly falsifying its figures, when in truth a specific data point was in the process of being corrected. While it is sexy to say the ”data was manipulated’’, and Jones builds up her stature by saying she was instructed ”to delete data, and hide information’’ none of it holds up to their own scrutiny. The Times and other Florida news outlets have monitored the portal in case of any data alteration. These dates being changed is the only incidence they have found.

The state sought to get dates of infection corrected, and they were accurately displayed after a day. This was done under the direction of a medical professional, something the media has lectured we need to adhere to. Instead, they now prefer to listen to a system analyst, one whose accusations do not hold up to the analysis of the data. Chalk it up to yet another politicized contradiction from the media during this pandemic.

BREAKING: Gavin Newsom’s PlumpJack Winery Is Shutting Down This Weekend Due to “Logistical” Issues