Latest school data: Infection rate among staff is lower than among the general community 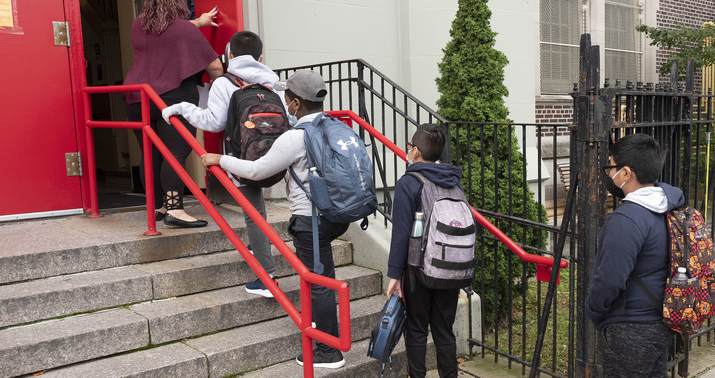 History will marvel at the teachers unions refusing to do their jobs at a moment when the evidence suggests their members would be safer from COVID in school than the average joe out and about in their neighborhood is.

I’ve linked this Brown University study of coronavirus infections in American schools before. They update with new data every two weeks; the numbers for the first half of February are now in. Brown compiles stats on the number of infections among hundreds of thousands of students and staff across many schools and then compares that to the number of confirmed cases at the county level for the relevant period. Since August, when school began, students have consistently had lower case rates than the surrounding community, which is no surprise. School staff have typically had higher rates — sometimes only slightly higher (84 daily cases per 100,000 for staff versus 81 for the general community in early January) and sometimes more so (43 per 100,000 in early November for staff, as the second wave was taking off, versus 32 for the community).

The first half of February turned out to be the first two-week period thus far in which all school case rates were lower than community rates. Numbers:

At the state level, the case rate among school staff in Texas was exactly the same as the community rate earlier this month (61 per 100,000) while in New York it was lower (37/100K versus 44/100K). With the virus momentarily receding and possibly unlikely to resurge soon as the weather warms — the variants will have a say in that, obviously — now seems like a fine time to capitalize by having schools reopen for business. Especially with teachers in some states being given priority for vaccinations.

Question, though: Is most of the country as gung ho to get schools open as righties are? The GOP is looking to win back suburban voters in 2022 by leveraging this issue against Biden and the CDC, both of which have been far too deferential to the Democrats’ union patrons. Moms and dads want their kids back in class; Republicans are willing to do that for them; Democrats aren’t — voila, a red wave washes through Congress next year and elevates the GOP to majority status once again. Piece of cake, right? Well … maybe not:

The general public is more conservative on reopening than both Fauci and CDC chief Rochelle Walensky, each of whom has said that vaccinations aren’t a prerequisite to reopening so long as other safety precautions are taken. The same poll shows Biden’s approval rating on handling education at 48/32, with independents rating him positively by an 11-point margin. Look at other polling and you’ll find similarly surprising results. For all the justified outrage among conservative parents about the unions dragging their feet and the damage that’s doing to kids, that sense of urgency doesn’t cut across party lines.

According to a Feb. 11-14 Quinnipiac University poll, 47 percent of adults believe that schools are reopening in their community at about the right pace; just 27 percent believe it’s not happening quickly enough88, and 18 percent think it’s happening too quickly. Likewise, a plurality (48 percent) of parents and guardians of K-12 students told YouGov/HuffPost that schools in their area were handling things “about right”; just 23 percent thought they were being too restrictive, while 19 percent thought they were taking too many risks. And educators are pretty happy too: 63 percent in the Hart Research/AFT poll said their school system has struck a good balance on the issue. Fifteen percent said that their school system had not done enough to resume in-person instruction, while 16 percent said it had gone too far to do so.

Unsurprisingly, then, people have largely positive views of those making decisions about reopening schools. In the YouGov/HuffPost poll, parents and guardians approved of their school district officials’ handling of the pandemic 54 percent to 30 percent. In the Hart Research/AFT poll, more educators said they were satisfied (68 percent) than dissatisfied (31 percent) with their school system’s handling of the pandemic. And according to Morning Consult/Politico, 59 percent of all registered voters said they trusted local school administrators “some” or “a lot” to decide whether to reopen schools in the fall; just 29 percent said they didn’t trust them “much” or “at all.”

At least two different polls found Americans supportive on balance of how teachers unions have handled the pandemic on balance. The conservative cause to restore children to an environment conducive to learning is righteous, but, tragically, it doesn’t seem to be widely shared. No matter how many experts are willing to swear that classrooms are safe for kids.

That data on teachers unions isn’t even the most depressing COVID-related polling this week. I’ll leave you with this, a reminder that being America’s worst governor while juggling multiple pandemic scandals is no barrier to strong approval so long as you’re in office in what’s essentially a single-party state.