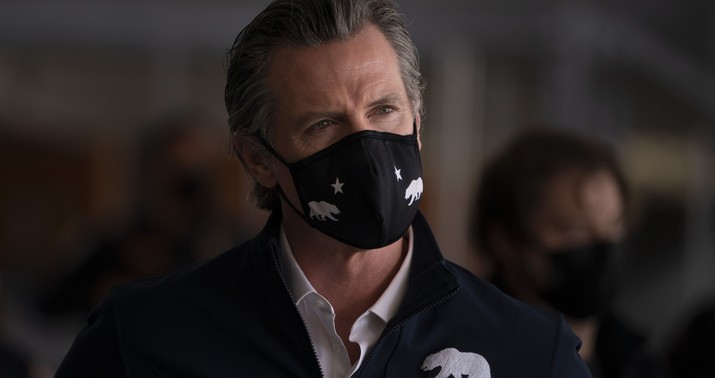 East coasters and conservatives know: Nothing good ever came out of this state.

Not since Reagan, anyway.

The New York Times and LA Times have scary and scarier write-ups of new research on B.1.427, a.k.a. the California variant of coronavirus, which popped up sometime in mid-2020 and lately seems to show up more and more in genetic sequencing of the virus carried by the state’s COVID patients. Pandemic-watchers have wondered why California seemed to do so well with cases last spring and summer before suffering such a hellacious outbreak this winter. The answer: B.1.427 — maybe. Two new studies point to this variant being more infectious and more lethal than standard coronavirus, but they haven’t been peer-reviewed and the samples in each are small. It could be we’re dealing with something as dangerous as the British, South African, or Brazilian strains.

Or it could be, as is so often true of things that come from Cali, it’s mostly hype.

Samples collected from a range of counties, and using a variety of collection methods, suggest the variant is 19% to 24% more transmissible. But in some circumstances, its advantage was much greater: In one nursing home outbreak, B.1.427/B.1.429 spread at a rate that was six times higher than its predecessors…

The variant’s enhanced propensity for spread was also evident in laboratory results. An analysis of viral samples from around the state showed that compared with people infected with other strains of SARS-CoV-2, those who were infected with the California strain had viral loads in the nasopharynx that were twice as high…

That observation is based on the medical charts of 324 patients hospitalized at UCSF, a relatively small sample. Still, the researchers found that the 21% of these patients who were infected with B.1.427/B.1.429 were more likely than their counterparts to have been admitted to the ICU, and they were 11 times more likely to die. That finding held up even after researchers adjusted for differences in the patients’ age, gender and ethnicity.

Just 16 percent of the California samples from November studied by researchers contained the B.1.427 strain. By January, 53 percent of samples did. The secret of the variant’s apparent success is a unique mutation on the spike protein known as L452R, which causes the virus to bind more firmly to cells. When scientists at UCSF engineered a coronavirus to have the same mutation, they found that it was 40 percent more efficient at infecting human lung tissue and three times as infectious as common SARS-CoV-2. Additionally, per the NYT: “The study also found that the new variant can evade the immune system better than other variants can. Antibodies from people who recovered from infections from other variants were less effective at blocking the new variant in the lab. The same was true when the researchers used blood serum from people who had been vaccinated.”

We have a problem, it seems. Or do we?

But Dr. Hanage of Harvard isn’t convinced that the variant poses a major threat. Every time B.1.1.7 [the British variant] has shown up in a new country, it has exploded quickly. By contrast, the variant discovered in California seems to have slowly gained dominance.

Dr. Chiu and his colleagues were able to estimate when B.1.427/B.1.429 originated by comparing the mutations that have arisen in the viruses since they split from their common ancestor. That analysis pointed to late spring. If correct, it means that the variant lurked at extremely low levels in California for perhaps four months or more.

“It’s not as big a deal as the others,” Dr. Hanage said. He speculates that if scientists sequence more coronavirus genomes in other places, they’ll find more of these moderately fast-spreading mutants. “Maybe variants are everywhere, and we’re just seeing them at the places where there’s sequencing,” he said.

Right, we’re not doing much sequencing as a country. Who knows but that there isn’t a “Wisconsin variant” responsible for the terrible outbreak there last winter, a “Dakota variant” to blame for that outbreak, and so on. The coronavirus may have evolved into various different but somewhat more dangerous forms in multiple places across the U.S. this winter. Frankly, given the astronomical number of infections and all of the mutations that might conceivably have resulted, it might be more surprising if that didn’t happen than if it did. Maybe the hype about the California variant is the epidemiological version of the drunk looking for his keys under a streetlamp because that’s where the light happens to be. Or maybe it’s an artifact of a “superspreader” event. If a large gathering seeds a particular variant in a community, does the prevalence of that variant mean it’s more fit than common COVID or does it just mean that there were an unusually high number of vectors of transmission for that variant?

How much should we worry about California’s latest gift to America? Well, consider that the variant, however infectious and lethal, clearly isn’t indomitable:

Even the South African strain, which is cracked up to be the most dangerous out there because of its ability to reinfect people who’ve recovered from common COVID, isn’t unstoppable:

In fact, the early data from the research into the California variant suggests that it’s weaker against the vaccines than the South African strain. As noted above, it *does* seem to do better against antibodies than standard coronavirus does — just not so much better that we should worry that Pfizer and Moderna can’t stand up to it. Antibodies were half as effective against the California strain in lab testing but just a sixth as effective against the South African. If the current vaccines can handle the more potent variant, as research suggests they can, they should be able to handle California’s.

Of course, that would require California to dose out the vaccines in an expeditious way. Which, you know. It’s California.

Exit question: Barring the arrival of a variant that’s proven to beat all available vaccines, is anyone’s behavior going to change meaningfully in response to new strains popping up? The only behavioral adjustment recommended by experts in response to the circulating British virus is to consider double-masking to make sure that you’re filtering out as many particles as possible, knowing that that virus is more contagious than others seem to be. It’s a cliche by now but it’s true — the vaccines are the only real solution.