Nikki Haley: We shouldn’t have followed Trump down this path and he has no future in office 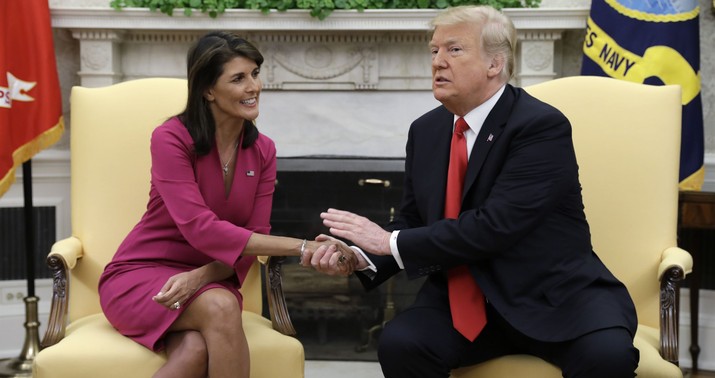 “This is an incident of Nikki Haley breaking with Nikki Haley,” said House Dem James Clyburn about the quotes from Haley that are circulating this morning. “Just two or three weeks ago she was admonishing us to ‘leave the man alone,’ now she’s saying we shouldn’t have followed him.”

But that’s not true. Clyburn has the timeline wrong, and the timeline is important in showing you just who Haley is.

It would be surprising if she had said two or three weeks ago that Congress should leave Trump alone and then had suddenly turned around this week to harshly criticize him, a moment when he’s on a glide path to acquittal and nearly every Republican in Congress is behind him. That would be a rare case of Haley taking a bold moral stand that put her crosswise with Trump and MAGA, something she’s taken great pains to avoid since 2017. Haley wants to run for president someday, ideally 2024, and understands like every other Republican does that you can’t win a primary if Trump fans hate you. So she’s been careful in scolding him, occasionally slapping him on the wrist to show establishment Republicans that she’s still one of them at heart but never going for the jugular for fear that Trump voters will hold it against her. It’s really weird, then, that she’d be quoted in Politico today declaring Trump’s political career over because of his “stop the steal” propaganda and the Capitol attack it inspired.

But when you check the date of the interview in which she gave those quotes to Politico, it makes more sense. It was January 12, two weeks before she went on Fox News to demand, as Clyburn said, that everyone should leave our poor ex-president alone already and stop harassing him with impeachment trials. Politico’s story wasn’t published until today but Haley’s criticism of Trump is a month old. And that makes all the difference.

That was six days after the Capitol riot, a moment when it seemed like Republicans in Congress in their shock and anger at Trump might seize the opportunity to be rid of him by joining Democrats in impeaching and disqualifying him. In fact, January 12 was the very day that Liz Cheney announced that she would vote for impeachment, a moment that shook American politics because it suggested, however briefly, that there might be a dam break within the GOP congressional caucuses against the president. Haley might have seen the news that afternoon about Republicans breaking ranks and decided that it was the perfect moment to distinguish herself as an “early” critic of his post-election behavior just as his political stock began to crash.

But it didn’t crash. Republicans regrouped behind him. And so here she was on Fox two weeks later abasing herself to make amends, knowing that the quotes she gave Politico were destined to be published soon and infuriate Trump:

Nikki Haley: I don’t even think there’s a basis for impeachment… Now they’re going to turn around and bring about impeachment yet they say they’re for unity… I mean at some point I mean give the man a break. I mean move on… pic.twitter.com/IqnZrIDIY0

Everyone’s getting tired of these little games she keeps playing, including members of her own party in Congress:

Her reversal on whether Trump should be given “a break” wasn’t the only cynical moment in the Politico piece. At one point she told reporter Tim Alberta that she didn’t think there was anything especially worrisome about the sitting president of the United States spending two months trying to convince the country on the basis of no evidence that the election had been stolen. “I didn’t think that there was anything to fear about him. There was nothing to fear about him when I worked for him,” she said, adding later, “Never did I think he would spiral out like this. … I don’t feel like I know who he is anymore. … The person that I worked with is not the person that I have watched since the election.” Which is nonsense, of course. Whatever you think of Trump’s “stop the steal” campaign, it was entirely in character. Literally his first day on the ballot in a U.S. election, the Iowa caucus in 2016, ended with him accusing Ted Cruz of having cheated to win because Trump couldn’t cope psychologically with the embarrassment of losing. Nothing was more predictable than that he would be a sore loser of historic, reckless proportions if Biden defeated him.

Just like it was also predictable that that sore-loserism might turn dangerous — which, ironically, Haley once seemed to understand. (Lots of Republicans used to understand that Trump posed a special danger to civic peace.) Asked in early 2016 why she had become a vocal critic of candidate Trump, she went so far as to connect the sort of rhetoric he engaged in with the mass shooting in Charleston by a white supremacist the year before. “I know what that rhetoric can do. I saw it happen,” she told the AP. Five years later, she was telling Alberta that she saw nothing of particular concern in him trying to stage a soft coup for several months and that she was surprised to see him “spiral.”

How can anything she says be taken seriously, as something other than the product of political calculation?

Her strategy now, and always, has been to try to walk the tightrope between the GOP’s MAGA majority and the swing voters to whom she’s supposed to have special appeal as a would-be 2024 nominee. She’s going to triangulate, in other words, dosing out a little defense of Trump here, a little indictment there, and hoping everyone is sufficiently content to choose her as the party’s candidate on pure electability grounds. But it can’t work. As the last six weeks of Mike Pence’s life have demonstrated, anything short of absolute loyalty to Trump is disqualifying for his supporters. Haley’s already broken that rule. And reporter Benjy Sarlin is entirely right about what sort of headaches Haley or any other non-MAGA nominee would have to manage in 2024 if Trump passes on the race and decides to participate in the election as an exalted “commentator” instead:

Were Haley to rise to the top of the polls, Trump would be watching it 24/7 on cable, getting jealous of the attention, and inevitably he would say and do outrageous things to get the spotlight and then demand she affirm it all as a loyalty test. This is Trump 101. https://t.co/i8h5YHS1Uf

If you can spare the time, read Alberta’s profile in full — at least far enough to get through Haley’s halfhearted defense of the “stop the steal” campaign. Aren’t you outraged that he foisted these lies upon the country, Alberta asked her? “He believes it,” she shrugged, referring to the daily conspiracy theories he was pumping out. Which should sound familiar to “Seinfeld” fans.