Biden flack allegedly told reporter: “I will destroy you” if you expose my relationship with another reporter 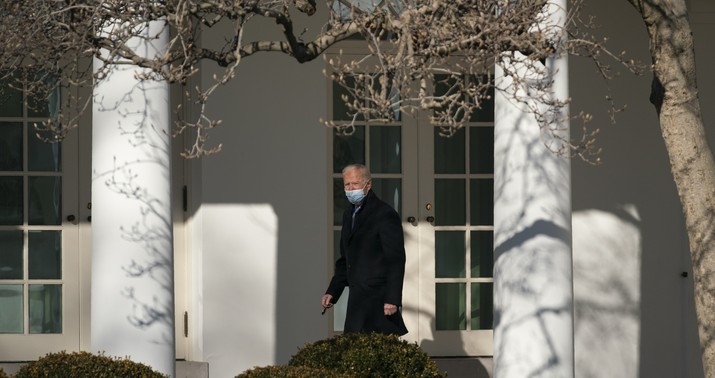 Reeeeeeally interested to see if our scrupulously fair media is as indignant about this behavior as they’d have been if a Trump deputy were responsible.

A few days ago People magazine ran a surprising soft-focus story about the romantic relationship between Biden comms guy T.J. Ducklo and Axios reporter Alexi McCammond. Normally a Democratic government official and a journalist wouldn’t advertise the fact that they’re literally in bed together and not just figuratively, as is common in D.C., but Ducklo and McCammond each participated in People’s scoop by providing quotes for it. McCammond had covered Biden for Axios before the relationship began and then, after it started, resolved her new conflict of interest by switching over to, uh, the Kamala Harris beat. Because you can count on the girlfriend of a Biden press deputy to be fair and balanced about Biden’s VP.

The question was why Ducklo and McCammond would want their relationship known to the public. Maybe it was an open secret? Maybe they thought there was no reason to hide it considering the “inspiring” angle to their story: It turns out that Ducklo was diagnosed with stage-four lung cancer in late 2019 despite his young age, continues to receive treatment for it, and McCammond is helping to see him through it. (He told People that it’s now “under control.”) It was a “love conquering adversity” story, in other words, with a political/media twist. That’s why People had it.

But, according to Vanity Fair, the truth was darker. We have a trifecta of bad behavior here: Ducklo threatening a reporter to try to stop a story, then Ducklo sexually denigrating her, and then the White House comms shop trying to blame the reporter somehow for the mess.

The confrontation began on Inauguration Day, January 20, after [Tara] Palmeri, a coauthor of Politico’s Playbook, contacted McCammond for comment while one of her male colleagues left a message for Ducklo, according to sources. Ducklo subsequently called a Playbook editor to object to the story, but was told to call the Playbook reporters with his concerns. But instead of calling the male reporter who initially contacted him, Ducklo tried to intimidate Palmeri by phone in an effort to kill the story. “I will destroy you,” Ducklo told her, according to sources, adding that he would ruin her reputation if she published it.

During the off-the-record call, Ducklo made derogatory and misogynistic comments, accusing Palmeri of only reporting on his relationship––which, due to the ethics questions that factor into the relationship between a journalist and White House official, falls under the purview of her reporting beat––because she was “jealous” that an unidentified man in the past had “wanted to fuck” McCammond “and not you.” Ducklo also accused Palmeri of being “jealous” of his relationship with McCammond. (Palmeri had no prior relationship or communication with McCammond before calling her to report on the Playbook item, which was a story that she was assigned and had not independently pursued.)

Vanity Fair claims that a flurry of calls ensued the next day between the White House comms office and Politico, with Team Joe admitting that Ducklo had behaved inappropriately and would apologize to Palmeri — which he later did, in an email, but supposedly only for having “lost his cool.” But Biden’s people also tried to shift the blame: “In another conversation, the same White House officials took aim at Palmeri by accusing her of breaking an off the record agreement with Ducklo and pressing Politico as to why the contents of the call had been revealed. Palmeri had only informed her editors of the contents of the call, which she had transcribed into her notes as it was happening, after they asked her about it.”

Hoo boy. As I write this, news is breaking that Jen Psaki’s going to need a little extra time to prepare for today’s White House briefing:

Suddenly it’s clear why the People scoop appeared where it did, when it did, and why it did. Ducklo and McCammond discovered that Politico had gotten wind of their relationship and was about to break the news to official Washington in their widely read “Playbook” feature. That would have looked bad for both but especially for McCammond considering that the relationship had gone undisclosed even though she continues to cover the Biden White House. So Ducklo, a professional PR guy, must have had the bright idea to get ahead of the story by handing it on a silver platter to People in return for the sort of gauzy “isn’t this cute and inspiring?” coverage he knew the magazine would provide. They nuked Palmeri’s scoop, fearing that it would be less flattering to them, by directing Washington’s eyeballs to People instead.

Which maybe wasn’t so smart. If they had played ball with Palmeri, maybe the ugly details of what Ducklo said to her would have remained a secret between the White House and Politico. Or maybe not, of course: It could be that Palmeri or Politico felt morally obliged to expose Ducklo by revealing what he’d said, knowing that he might be pulling this routine with other reporters too. For what it’s worth, the journalists I’ve seen who are commenting on this on social media today claim they’re never treated the way Palmeri allegedly was, even in a cutthroat environment like Washington. She must have been genuinely taken aback, particularly given that this happened on day one of the Biden administration amid a bunch of flowery talk from the president and his deputies that the White House was about to start behaving professionally again after four years.

In fact, here was Biden himself speaking on camera that very day about the new tone his administration would set:

"[If] I hear you treat another colleague with disrespect, talk down to someone, I promise I will fire you on the spot"

Does he have any choice but to fire Ducklo now? The catch is that, again, Ducklo is dealing with a grave illness. Who knows whether he could find a new job anytime soon and, if not, whether he could afford the health insurance he needs. My guess is they’ll end up reassigning him somewhere, maybe sending him off to a Super PAC or something to keep him on a payroll with benefits intact. That would also solve McCammond’s conflict-of-interest problem. Stay tuned for Psaki’s briefing.

Update: Well, that was fast. As expected, Ducklo will not be fired.

TJ Ducklo has been placed on a one-week suspension without pay, @PressSec says. pic.twitter.com/G6fBl3xBji

Update: Yeah, good question. Why wasn’t Ducklo already suspended by the White House when they found out about this in January? Clearly his supervisors didn’t care what he did, they care that he got caught.

Keep in mind the WH has known about this since January. https://t.co/i5K3onVsnF