Who’s up for some “Pearl Milling Company” syrup on their pancakes? 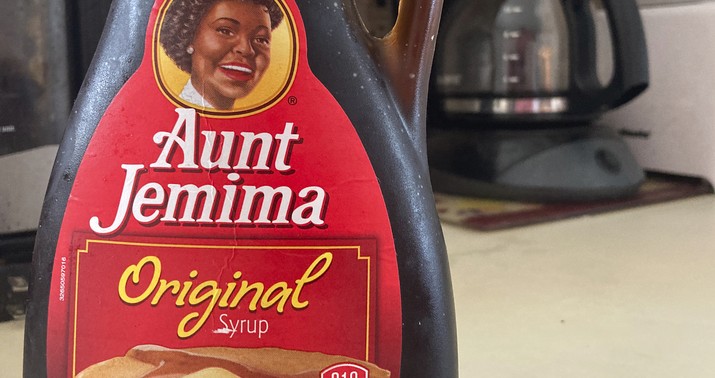 Not me, my man. I like my pancake syrup racist, thanks.

This is the unfortunate outcome of Quaker Oats’s decision last summer to remake their brand, part of an effort by corporate America to show solidarity with protesters after George Floyd’s death by canceling their “problematic” mascots. Uncle Ben got the axe; so did the Cream of Wheat chef. The Land O’ Lakes Native American maiden got cashiered too. And of course so did Aunt Jemima, whose name was taken from a song called “Old Aunt Jemima” sung by slaves and later incorporated into, uh, minstrel shows. The original model for the mascot was herself born a slave. The mascot was a mammy, jes’ cookin’ up pancakes for de white folks, until it was modernized after the civil-rights era.

Problematic. It had to go. But did it need to be replaced by this?

It’s not as bad as “Washington Football Team” but it’s bad. The Times explains the origin:

The new name comes from the milling company in St. Joseph, Mo., that pioneered the self-rising pancake mix that became known as Aunt Jemima, according to PepsiCo, which said the rebranded products would arrive in stores in June…

Ja’Mal Green, a civil rights advocate and former mayoral candidate in Chicago, said on Twitter on Tuesday that the change had been long overdue.

“130 years ago two white men created ‘Aunt Jemima’ syrup,” Mr. Green said. “Took a Black slave archetype & made her the face of their syrup for profit. Today, that ends. Aunt Jemima is finally being replaced. Those white men made billions appropriating blackness & hopefully rotting in hell.”

In addition to the name change, Quaker Oats spend $1 million on an initiative “to empower and uplift Black girls and women.” So, what’s wrong with the new look? Three things:

1. Obviously they kept the same color scheme and the same font in order to leverage consumers’ recognition of the Aunt Jemima brand, which is understandable. They don’t want longtime Aunt Jemima fans to have any more difficulty than necessary finding the bottle in the syrup aisle at the store. But what they ended up with is a product that looks like a knockoff attempting to capitalize on AJ’s popularity rather than a makeover of AJ itself. If I missed the news about the rebrand and saw this at the supermarket, my thought would be, “No thanks, I don’t want the bootleg stuff. Where’s the Aunt Jemima?”

2. “Pearl Milling Company” just doesn’t sing, however defensible its use is given the historical provenance of pancake mix. I think it’s the word “Company” that doesn’t sit right. “Companies” are things you hire when you want to move furniture or lay concrete, not when you want a tasty breakfast. That was an (ironic) advantage of the “Aunt Jemima” brand: As dubious and dehumanizing as its origins were, naming the product after a person lent it a softer personal touch that makes food products more appealing.

3. Uh, “Aunt Jemima” is still on the label. It’s in small font, no doubt there to reassure confused consumers that “Pearl Milling Company” is actually the same as AJ and presumably to be removed permanently after shoppers have had time to learn about the rebrand. But if the word “Jemima” is now taboo, it’s a bit odd to still see it on the label.

Which makes me wonder: Did they really need to drop “Jemima”? The mascot had to go because it’s based on a mammy. The “Aunt” part had to go because it’s an artifact of second-class citizenship, heralding from a time when black Americans in the south were addressed as “uncle” or “aunt” instead of “mister” or “ma’am” to deny them the dignity of those titles. But would “Jemima Syrup” have worked okay, just for the sake of brand continuity? You don’t want a name associated with a minstrel song as your corporate label, on the one hand, but on the other hand you’ve taken good-faith steps to rid yourself of other demeaning connotations with the mascot. “Jemima” is still a perfectly fine name (albeit more common in the UK than here), not insanely notorious like “Sambo.” Could they have kept it? It beats “Pearl Milling Company,” no?

Gavin Newsom's Reaction to Texas Reopening Is a Sight to Behold