Whoa: Jim Jordan not running for Senate in Ohio after all 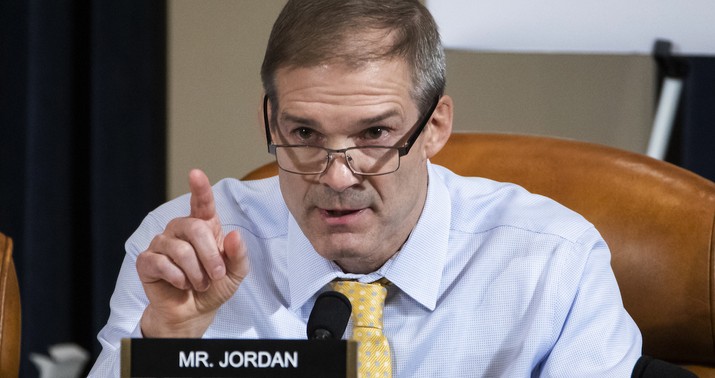 I’m sincerely surprised although other politics nerds appear less so. Trump’s easy victories in Ohio in 2016 and especially in 2020 are the most impressive of his short political career, I think. The Buckeye state used to be the ultimate presidential battleground and its Rust Belt neighbors remain among the most important swing states. But OH went full MAGA five years ago and never looked back. Trump beat Hillary Clinton there by eight and then pulled the same margin on Joe Biden even as Biden was en route to winning Michigan, Pennsylvania, and Wisconsin narrowly. Ohio is Trump country now.

So why wouldn’t one of the Trumpiest members of the House want to lunge for Rob Portman’s soon-to-be vacant Senate seat? Trump himself would be happy to campaign there for Jordan, I’m sure, given Jordan’s unquestioning loyalty to him.

No thanks, says Jordan. I’m out. How come?

A spokesperson for Jordan’s congressional campaign told Fox News that he is “honored by the overwhelming encouragement he has received to run for the United States Senate.”

“However, he is solely focused on representing the great people of Ohio’s Fourth District, and will not be running to fill the seat of retiring Senator Rob Portman,” the spokesperson said. “Mr. Jordan believes that at this time he is better suited to represent Ohioans in the House of Representatives, where as the top Republican on the Judiciary Committee, he can advance an America first agenda, promote conservative values, and hold big government accountable.”

The decision comes after a source familiar told Fox News earlier that Jordan, R-Ohio, was “considering” mounting a Senate bid.

The big winner from Jordan’s decision not to run is apparently Ohio state GOP chairwoman Jane Timken, who donated big bucks to Trump’s campaign. She’d be a strong contender to win Trump’s endorsement now that Jordan’s out of the picture, which would make her the favorite in what could be a crowded primary.

Three theories are kicking around for why he opted out. One is that he’s worried about this old scandal blowing up again if he took the plunge, as Dems would wage brutal partisan war to try to steal a seat in Ohio. Jordan’s been accused by at least six former members of Ohio State’s wrestling team of having ignored complaints about sexual abuse by a team doctor when Jordan was a coach there. Jordan claims he never heard a word about it at the time but the accusers say they remember things Jordan said specifically after he was told what was going on. (“If he ever tried that with me I’d snap his neck like a stick of dry balsa wood.”) The OSU story got some media coverage last year, but since Jordan himself wasn’t accused of the abuse — and since he’s only one of 435 House members — it wasn’t a sensation. That might change if he ran for Senate. If he ended up losing the race, he’d be wounded and scandal-stigmatized.

Another possibility is that he’s eyeing McCarthy’s job as presumptive Speaker in 2022. The midterms should bring a wave of MAGA-fueled primary challenges in GOP House races, which could mean a Republican majority in 2023 that’s more aligned with Jordan than it is with the likes of McCarthy. McCarthy’s already sufficiently weak that backbenchers like Matt Gaetz are openly defying him. More importantly, Trump was enraged at McCarthy for criticizing him during his House floor speech before the impeachment vote on January 13 and might hold a grudge, even though McCarthy’s now doing what he can to heal the rift. If Jordan challenged McCarthy for Speaker in 2023, whom would Trump endorse? If he endorsed Jordan, what would the caucus do? Maybe Jordan is calculating that being a freshman senator actually isn’t the most exciting political opportunity available to him right now. Conceivably he could run the whole House in two years if the GOP has a big election night in 2022.

The last possibility is that he’s not gunning for Speaker but *is* gunning to be a very big fish in the next Congress. With Republicans back in the majority, he’d almost certainly be the new chairman of the House Judiciary Committee. As it happens, the House Judiciary Committee is the one charged with overseeing impeachment. There’ll probably be an impeachment of Biden in 2023 for pure revenge reasons and Jordan would be the face of it. Even if there isn’t an impeachment, Jordan’s also a senior member of the Oversight Committee, which would be charged with investigating Biden’s administration. He could lead that effort too. And as a leading member of the House Freedom Caucus, he’d be in a position to push McCarthy to the right without having to deal with any of the headaches involving caucus management and developing legislation that McCarthy would have to cope with. He’d have a very comfortable, influential role in the new majority. Why give that up to play populist second fiddle or even third fiddle to Ted Cruz and Josh Hawley in the Senate?

Anyway, exit question: Who’s going to run for the Democratic nomination for this seat? Chatter has begun that Dr. Amy Acton, the “Anthony Fauci of Ohio,” is thinking about it. Will voters still care about that in 2022, when the pandemic is (hopefully) in the rearview mirror?