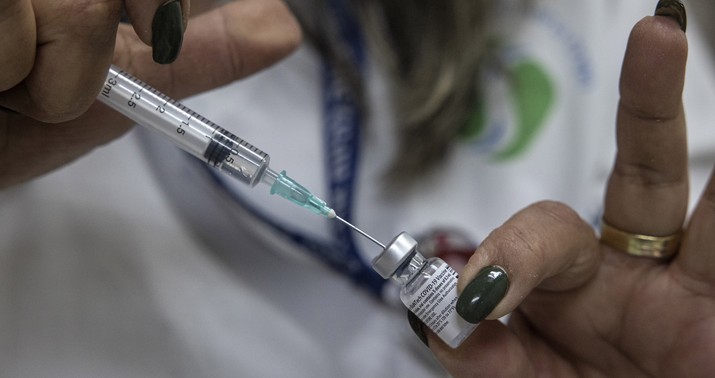 Just passing along some exciting news this morning as America inches towards herd immunity. Estimated time of arrival: Uhhhhh, 2028?

Israel’s going to get there much faster. Scientists are being cautious about celebrating this study too much, as there was no control group and there are reasons to think there might be some sample “bias.” But knocking down infections to a “one in 6,400” clip would be tremendous progress. The end of the pandemic is on the horizon:

Israel’s Maccabi Healthcare Services revealed Monday that only 0.015 percent of people are getting infected in the week after receiving their second shot…

Leading immunologist Cyrille Cohen told The Times of Israel that among the general population, around 0.65% are infected in a given week…

“These are very good results, and if it continues this way it could even be that the vaccine is more effective than Pfizer thought it would be based on clinical trials,” Anat Ekka Zohar, the Maccabi analyst behind the research, told The Times of Israel.

A larger study conducted by Israel’s health ministry found a similar rate of infection among 428,000 people who’d received both doses, with just 63 confirmed cases among that group. Israel had 7,870 confirmed cases of COVID yesterday, a rate of 0.08 percent across the population — eight times higher than the vaccinated population in Maccabi’s sample. But confirmed cases are misleading, since of course there are many people who contract the virus and never get tested. That’s where the 0.65 percent estimate is coming from, I assume: Best guess is that there are eight times as many unconfirmed infections as there are confirmed ones. Put it all together and the average person may be something like 60 times more likely to be infected than someone who’s received both shots from Pfizer.

But even that’s not the best part. After all, America would still be seeing 50,000 confirmed cases a day if the Pfizer vaccine is as effective among our population as it is among Israel’s. At the end of the day, infections aren’t that important. Serious illness resulting from infection is what we’re concerned with, and the Maccabi study had good news there too. Of the 20 vaccinated people who tested positive, not one needed to be hospitalized even though half the group suffered from chronic diseases, according to Reuters. The old canard from last spring that COVID is “just the flu” was never true but it may become more or less true by the end of 2021, depending upon what percentage of Americans get vaccinated.

Still, there’s cause for caution with the Israeli results:

The early Israeli numbers are based on the first people to get the vaccine. Such people, experts say, are likely to be more concerned or informed about the virus and therefore more careful about social distancing and mask wearing. They could also differ from those who did not rush to get the shot by location and socio-economic status.

Also, experts say, the disease changes over time. Prof. Ran Balicer, the chief innovation officer at Clalit and a leading Israeli epidemiologist, said that two-week-old data can be like evidence from a different era or “about a million vaccines ago in Israeli terms.”

Moderna announced yesterday that while its vaccine appears to produce enough antibodies to overcome the South African strain of COVID, the vaccine isn’t quite as strong against that variant as it is against common COVID and the British strain of the virus. Hence the urgency in vaccinating the population as quickly as possible. The more the common strains continue to spread and mutate, the greater the odds that a vaccine-resistant variant emerges.

There’s good news here at home too. Sleepy Joe finally mustered up the courage to raise his expectations for daily vaccinations from one million per day, which we’ve topped every day for the past six days, to 1.5 million per day. That goal also seems too modest, frankly, as we already topped 1.5 million on January 20 and the rolling average stands at 1.3 million. We want to be at two million per day at a minimum and ideally somewhere north of that, and we should be able to do it before too long: Pfizer announced this morning that they expect to supply the U.S. with 200 million doses two months earlier than expected (due to the practice of “overfilling” vials so that they hold six doses instead of five) and the White House plans to tell governors today that they’re shipping 10 million doses to the states next week instead of the expected 8.6 million. There won’t be a shortage — at least, not in the next few weeks.

For cripes sake, even America’s worst governor has some progress to report:

93% of first doses allocated to NYS healthcare distribution sites have been administered as of 11am today.

I’ll leave you with yet another piece of good news, not having to do with the vaccine this time but related instead to the “stopgap” vaccine known as antibody treatments. That’s what Trump got when he was hospitalized with COVID in October, but antibody drugs don’t need to be limited to people who’ve already been infected. One other obvious application is to give them prophylactically to people who are at high risk of infection, e.g., an uninfected husband or wife who has to care for their infected spouse. Do they work as a prophylaxis? Sure do, according to Regeneron, as you’ll see below. The question, as usual, is whether there’s sufficient supply to temporarily immunize a meaningful number of people and whether administering the drug, which is delivered via IV, is feasible en masse. But it’s another option on the table to reduce infections.