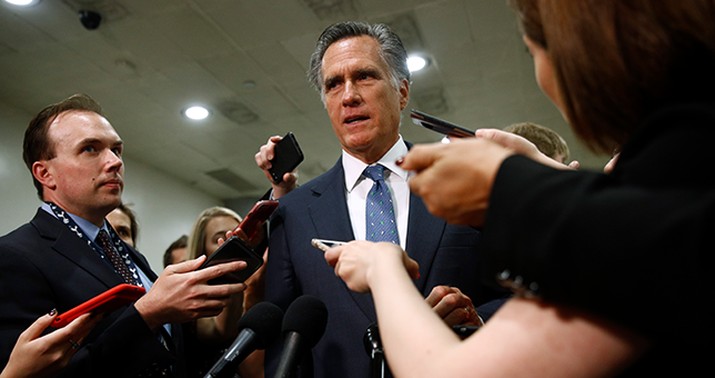 The Sunday shows will look forward and backward this morning as they ease into the Biden era with a bevy of senators from both parties. The backward-looking subject is impeachment, of course, stemming from Trump’s role in inspiring the riot at the Capitol on January 6. The forward-looking subject is COVID relief, with Sleepy Joe demanding another round of fiscal stimulus to warm up an economy frozen by the pandemic.

The Senate will play the main role in both matters. The star guest: Mitt Romney, the lone Republican to vote to remove Trump at his impeachment trial last year. He won’t be alone this time but we can probably count on one hand the number of his colleagues who’ll be willing to join him in voting to convict. He’ll chat with “State of the Union” and “Fox News Sunday” about his outlook for the trial and whether he’s amenable to any new COVID packages. The same goes for the other Senate Republicans appearing this morning: Marco Rubio on “Fox News Sunday,” Rand Paul on “This Week,” and Mike Rounds on “Meet the Press.” Paul will be a hard no on impeachment and more stimulus, of course. Rubio will also be a no on impeachment (he has a Senate race coming up in 2022) but is likely to be “stimulus-curious,” shall we say. He’s positioning himself as a nationalist Republican, someone willing to redistribute taxpayer money to taxpayers who need it most. Keep an eye on him to see if there’s any hope for a bipartisan deal.

Three Democratic senators are also booked to chat about the trial and the stimulus. Amy Klobuchar will talk to “This Week,” Dick Durbin will sit with “Meet the Press,” and Bernie Sanders will speak to “State of the Union.” The most noteworthy Democrat scheduled, though, is White House chief of staff Ron Klain, who’ll discuss the economic package and the vaccine ramp-up with “Meet the Press” as well. Expect him to be asked why Team Joe continues to stick with a goal of 100 million doses in 100 days when we already reached that pace under Trump. If there was “no plan” bequeathed to them by the outgoing administration, how is it that we’re hitting Biden’s targets before he’s even gotten rolling?

Finally, Anthony Fauci and Deborah Birx will both be on “Face the Nation” but for different reasons. Fauci’s the new chief medical advisor to the president and will weigh in on the plan to boost daily vaccination numbers. Birx is headed for retirement and will air her grievances about the damage done to her reputation by being seen as too loyal to Trump. The full line-up is at the AP.

Trump Jr. has PERFECTED the 'How it started/How it's going' game with tweet torching Molly Jong-Fast over Cuomo