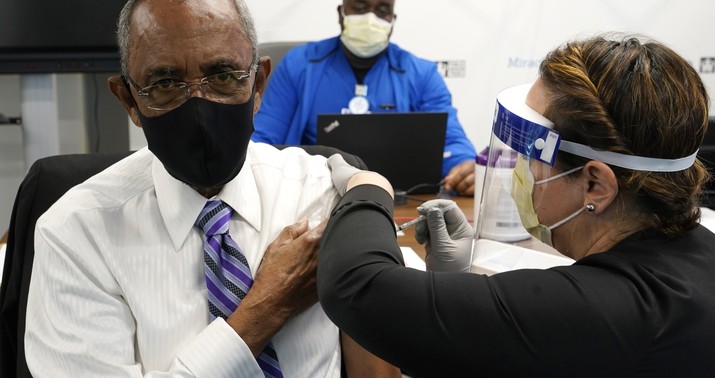 A little good news on the ol’ “killer plague that’s somehow still getting worse” front as the Biden era begins. Pfizer published a study two weeks ago indicating that their vaccine should work against the highly contagious UK variant of the virus, but that study came with a catch. It looked only at how the vaccine did against a single important mutation on the spike protein in the UK version of the virus. To have more confidence that the vaccine would be effective against that strain, they had to test it against the *multiple* mutations found on the UK variant.

They’ve done that now. Result: Success. If we can get shots into arms quickly enough, we can outrace even the souped-up British permutation of the virus.

The characteristics of the variant had led to concerns about the effectiveness of Covid vaccines against it. However, research published on preprint server bioRxiv showed “no biologically significant difference in neutralization activity” between the laboratory tests on B.1.1.7 and the original strain of the coronavirus.

The study, which has not yet been peer-reviewed, found that all of the mutations associated with the newly discovered variant were neutralized by antibodies in the blood of 16 participants who had previously been given the vaccine…

Moderna and AstraZeneca, which has developed a Covid vaccine in partnership with the University of Oxford, have said they expect their vaccines to be effective against B.1.1.7.

Pfizer and BioNTech developed a “pseudovirus” that mimics the mutations of the UK variant and applied it to blood samples from 16 people who’ve received both doses of the Pfizer vaccine. They found no meaningful difference in how effectively the pseudovirus was neutralized relative to the common coronavirus. Scientists expect that the UK strain could be dominant in the U.S. by March, so efficiently does it spread; the only way to slow it down is to use that time to vaccinate as many Americans as possible. We really are getting better at that, having already exceeded the daily pace Biden is aiming for (at least on one day last week).

That’s 1.1 million doses administered on January 15, a nice improvement which would be much nicer if we could double it. After all, the more widely COVID spreads, the greater the risk that new strains will evolve that won’t play as nicely with the vaccine. It may have already happened in California, in fact — the first “U.S. variant” of the virus.

That mutant, which belongs to a lineage known as CAL.20C, seemed to have popped up in July but lay low till November. Then it began to quickly spread.

CAL.20C accounted for more than half of the virus genome samples collected in Los Angeles laboratories on Jan. 13, according to a new study that has not yet been published…

But Eric Vail, the director of molecular pathology at Cedars-Sinai, said it was possible that CAL.20C is playing a large part in the surge of cases that has overwhelmed Southern California’s hospitals. “I’m decently confident that this is a more infectious strain of the virus,” Dr. Vail said.

Dr. Charles Chiu, a virologist at the University of California, San Francisco, said that across the state, he and his colleagues are finding the variant in roughly 20 percent to 30 percent of samples being sequenced. “It just popped up under our noses, and now it’s rising in multiple counties,” he said. “On the whole, it’s safe to say it’s going to spread outside of California.”

From minor community spread to 50+ percent prevalence in L.A. samples in less than three months. New variants can spread quickly, although scientists aren’t yet completely sure that the California strain is more contagious than standard coronavirus. It could be that a few major superspreader events are responsible for its apparent ubiquity, or maybe the samples being scrutinized by scientists happen to come from a sub-population where the California strain is more common. But check out California’s epidemic curve starting in November, when the variant reportedly began spreading. Hoo boy:

The good news, as you can see, is that things have cooled off a tiny bit in Cali lately. (Unfortunately, that’s probably not due to vaccinations, as the state’s effort remains sluggish.) The bad news is that, as the British variant expands across the country, there’s every reason to think California and other states are headed for another gruesome spike on top of the one they’ve already suffered. If people are no longer playing along with lockdowns, the only solution is an all-out emergency mass-vaccination push. It’s Joe Biden’s problem now.