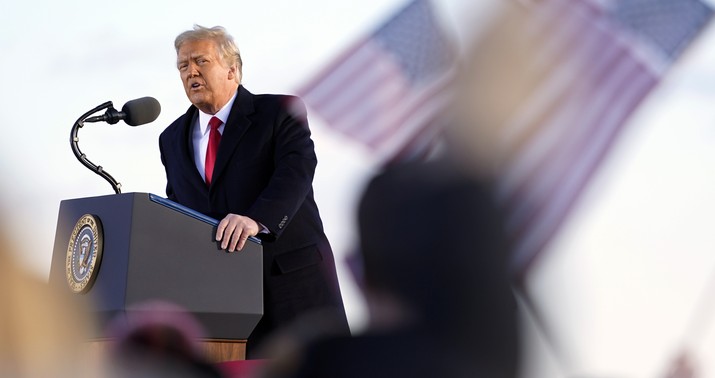 The marriage of convenience between him and the GOP establishment has already been broken irretrievably. Might as well formalize it.

Then both sides can proceed to the dissolution stage, where they’ll divvy up property and resolve family issues. The GOP retains possession of the RNC, of course.

Trump gets custody of QAnon.

Seriously, though: This is an interesting move to pull at a moment when Senate Republicans are weighing whether to convict him and disqualify him from holding future office. If they suddenly have to worry about Trump leading a right-wing third-party effort to cannibalize GOP votes in 2024, how do you suppose that might affect their calculations about whether to bar him from running?

President Trump has talked in recent days with associates about forming a new political party, according to people familiar with the matter, an effort to exert continued influence after he leaves the White House.

Mr. Trump discussed the matter with several aides and other people close to him last week, the people said. The president said he would want to call the new party the “Patriot Party,” the people said…

It’s unclear how serious Mr. Trump is about starting a new party, which would require a significant investment of time and resources.

A new party led by Trump would be filled with grifters, conspiracy cranks, insurrectionists, and “performance art” conservatives. But we already have a party like that, so why do we need a new one?

He’s not going to follow through on this — he simply can’t muster the sort of commitment to the effort that it would require — and I can’t understand why he’d even consider it. If he wants to wreak havoc on the GOP for their tepid statements of disapproval after he tried to swing a coup and then incited a mob to attack Congress, sticking with the party and fueling primary challenges to his enemies is a far smarter play. If he goes off and starts the Patriot Party and gets them on the ballot in House and Senate races, he can certainly wreck Republicans’ chances of winning the general election by splitting the right-wing vote. But all that would do is produce a heavily Democratic Congress.

Whereas if he remains a Republican, he can back primaries against Liz Cheney, Kevin McCarthy, and anyone else whom he deems to have behaved with insufficient loyalty. And if his candidates win those primaries, he gets a twofer: Not only do they stand a fair chance of winning the general election as Republican voters of all stripes unite behind them, their success will advance public perceptions that the GOP is a wholly owned Trump subsidiary.

Why would he want to create a “Patriot Party” and have it aspire to play spoiler when he could convert the Republican Party into the “Patriot Party” by gradually replacing its leadership class with MAGA devotees — and ultimately have it win power?

The effort to purge the disloyal and replace them with sycophants has already begun, in fact:

Hannity says it’s time for new leadership in the Senate if Mitch goes along with impeachment pic.twitter.com/dvduCzh1Sg

I think the third-party idea is nothing more than Trump lashing out in spite and disgust at how “betrayed” he feels by the GOP establishment. His instinct is to do something dramatic to repudiate them the same way Mike Pence, say, has made dramatic gestures to repudiate him by not trying to block certification and attending the inauguration today. A third party is what you do when you want to say “f*** you” in the grandest possible way. It’s not what you do if you want truly meaningful revenge, though. Meaningful revenge would involve completing his hostile takeover of the Republican Party and forcing the non-Trumpers to go off and form a rump third party of their own.

Besides, what would a Trump-led “Patriot Party” mean for the political aspirations of the Trump children like Don Jr and Ivanka? They’re interested in more than just playing spoiler by dividing the right in a general election. But it’s unthinkable that either would run in a Republican primary instead of as members of dad’s party when he’s busy trying to get that party off the ground.

Maybe they can do some right-wing version of what Bernie Sanders has done, running in a major-party primary as a nominal member of that party but identifying as outside of it. Just as Bernie is a socialist who runs as a Democrat, Ivanka could be a “Patriot” who runs as a Republican. But that would be more of a branding/ideological exercise, not requiring a full-blown third party to make it possible. Essentially she’d just be running as a nationalist candidate in a party that still describes itself as conservative.

Exit question: If he started the Patriot Party tomorrow, what percentage of the current GOP would be split between Trump’s party and the Republican Party by, say, summer 2022? 50/50? I think it’d be more like 20/80, but 20 percent is plenty enough to wreck the GOP in a general election.

'Journalists don't care about the truth': Ted Cruz calls out Dems and the media over how they described his amendment to the Covid-19 relief bill

BLM Racially Taunt and Scare Little Kids and Their Parents in Louisville, It Doesn't End Well for Them