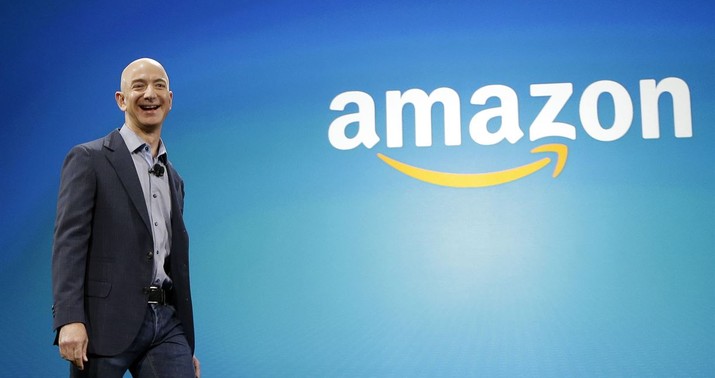 It’s auspicious that a company known for efficient delivery is ready to join the massive vaccine mobilization effort. If they can deliver batteries to any location in the United States in two days, they should be able to contribute something to streamlining the dispensing of lifesaving medication.

But, er: Why now? The vaccine’s been available for more than a month.

Was this offer ever made to Team Trump? If not, why not?

Dave Clark, the CEO of Amazon’s consumer business, and one of the company’s highest-ranking executives, sent a letter to the newly appointed president shortly after he was sworn in on Wednesday.

“As you begin your work leading the country out of the COVID-19 crisis, Amazon stands ready to assist you in reaching your goal of vaccinating 100 million Americans in the first 100 days of your administration,” Clark wrote in his letter, a copy of which was obtained by NBC News.

“We are prepared to leverage our operations, IT, & communications capabilities and expertise to assist your administration’s vaccination efforts,” Clark wrote. “Our scale allows us to make a meaningful impact immediately in the fight against COVID-19, and we stand ready to assist you in this effort.”

Granted, it would have been awkward for Amazon to reach out to Trump after he made it clear many times over the years that he bore a grudge against Jeff Bezos. He sh*t-talked the Bezos-owned Washington Post, complained that Amazon should pay higher rates to the Postal Service for delivering its packages, and (if you believe Amazon) corruptly steered a Pentagon contract for cloud computing to Amazon’s competitor Microsoft rather than give the business to Bezos’s company.

But so what? No one expects Amazon to do Trump a favor. We expect them to do the country a favor, especially if they’re willing to do that same favor once Biden’s in charge.

Dylan Byers, who wrote the story quoted above, said today that Amazon *did* reach out to Trump last month — sort of:

+ For those asking if similar offer was extended to President Trump… I asked. Amazon rep said company was in touch with CDC’s Advisory Committee on Immunization Practices and Dept. of Health and Human Services last month. But no mention of a direct letter to President Trump.

Is … this the letter that Byers means? Read it yourself. It was sent to the CDC advisory board on December 16; all it does is request that Amazon employees be considered essential workers, and thus higher priority, in the vaccination rollout. There’s no offer of “leveraging their operations” to assist the national vaccination effort.

Best-case scenario: Amazon was under the mistaken impression a month ago, as we all were, that the feds and states had some sort of plan to get shots into arms expeditiously. Now they know differently so they’re stepping up. Worst-case scenario: They bore Trump a grudge because of the grudge he bore them and figured they’d hold back on offering help until the Democrat took office.

And maaaaybe, just maybe, they figured it couldn’t hurt to butter up the new guy as his party considers how it might regulate Big Tech over the next four years, especially now that the willingness in Congress to do so has grown more bipartisan. Amazon’s essentially offering to help make Biden’s first and most important initiative as president, the vaccine ramp-up in his first 100 days, a bigger success. That’s the sort of thing a company might earn a favor for doing. Trump was a lame duck when the vaccine rolled out and had no favors left to grant.

The most obvious ways Amazon could help are with distribution, of course, and also potentially by hosting vaccinations at Amazon properties. That would be to the company’s advantage too, as they might be able to swing a deal in which Amazon employees gain vaccination priority in exchange for the company’s help. Bezos would love to eliminate the risk that a meaningful part of his work force will miss time at the warehouse due to COVID if he can avoid it. But don’t sleep on the IT angle in Amazon’s pitch either. One of the logistical nightmares for people, particularly older people, in getting the vaccine is figuring out how and where to sign up. Having Amazon create a portal to make an appointment right on its homepage, one of the most heavily trafficked in the world, would simplify that enormously. And unlike the sort of Kafkaesque labyrinth put together by bureaucrats in New York, Amazon’s appointment scheduler would doubtless be easy to use.

A timely news item from nine days ago: “To Fix the Vaccine Rollout, Why Not Call Amazon?”

With the COVID-19 vaccine rollout lagging far behind schedule, a Northeastern professor offers this advice to president-elect Joe Biden: Hire a supply chain expert from Amazon, Nike, or another company that manages complex inventory by overseeing all phases from end to end…

“Every day, Nike is thinking about how much inventory they have, how they’re promoting it, how they’re selling it, who are the customers,” says Sanders. “They’re watching and communicating in real time with their production facilities and their distributors, which is the level of transparency that must be applied to vaccines—an especially complex product with stringent handling requirements and shelf life.”…

“Before the pandemic, I was standing in the supply chain headquarters of a big company in Massachusetts, in what almost looked like a computerized war room,” she says. “You could watch the movement of various products, you could see the inventories building up, you could watch the managers monitoring everything that was going on. That’s what needs to be done with the vaccines.”

I continue to assume that distribution isn’t actually the big problem with the vaccine rollout out since less than half the number of doses that have been distributed have actually been administered. The more serious problem seems to be matching supply to demand. Make it easier for people to know where to go to get their shot and that’ll increase the daily rate. Make it easier for vaccine providers to staff 24/7 and that’ll increase it too. Who knows whether Bezos can afford to spare any employees to actually help administer vaccines, but Amazon’s always hiring. Especially if Uncle Sam is willing to reimburse.

Designer of CPAC Stage, Accused of Looking Like Nazi Symbol, Is Identified, Kicker Is Who They Are and For Whom They've Worked