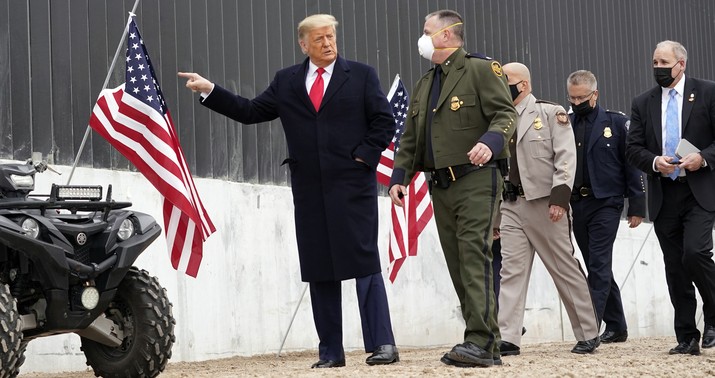 The news that President Borders had curiously chosen to relax border restrictions in his waning hours as president sent a charge through political Twitter last night. Why would a guy whose presidency was defined by limiting entry to the United States, and whose biggest boast on COVID was his willingness to ban travel from China last year over the wishes of some Democrats, suddenly move to open the borders to foreign travel while the pandemic is raging?

The sinister take was: He’s now officially pro-virus. In his rage and disgust at having been denied another term, he was bidding Americans farewell by showing that he doesn’t care how many of us get COVID anymore.

The less sinister but still cynical take was: He’s forcing Biden into the position of having to admit that border controls are proper. This is his way of repaying the left after they complained last year about restricting travel from China. He’s going to lift travel restrictions knowing that Biden will have no choice but to reinstitute them, effectively affirming that Trump was right to limit entry into the U.S. all along.

The problem with the sinister take is that not even Trump is that malicious. (I think.) The problem with the cynical take is that Democrats long ago became the party of maximum COVID restrictions following their initial skepticism early last spring. Biden’s chief campaign promise was that he’d make containing the virus his top priority as president contra Trump’s focus on reopening the economy for business. Lefties have already conceded that closing the borders is proper in a pandemic. Forcing Biden to do it now doesn’t change that equation at all.

There’s a more prosaic reason for Trump’s new executive order lifting restrictions. Plain and simple, he’s once again prioritizing the economy over containing the virus. In this case he’s lifting the travel bans knowing that Biden will reinstate them just to show that he thinks the country should take the financial health of businesses and their employees as seriously as the actual health of Americans as the vaccine rolls out. Specifically, he was making a gesture towards the airlines that he sympathizes with their plight:

The expected easing of travel restrictions comes after the US Centers for Disease Control and Prevention said last week it will require a negative Covid-19 test from all air passengers entering the United States — a move it says may help slow the spread of the coronavirus. Air passengers will be required to get a test within three days before their flight to the United States departs, and to provide written documentation of their lab results, or documentation of having recovered from Covid-19, the agency said in a statement to CNN…

The combination of the testing program announced last week and lifting travel restrictions aligns with the interests of several airlines that have been in negotiations with the CDC and the White House. Earlier this month, a group of major airlines asked the Trump administration to broadly expand a program to test US-bound passengers and simultaneously lift travel restrictions.

Airlines for America — with members including American Airlines, United Airlines and Delta Air Lines — wrote to Vice President Mike Pence asking the administration to implement “a global program to require testing for travelers to the United States.” Such a program would allow authorities to release restrictions on entering the US from the European Union, United Kingdom, and Brazil, the group wrote.

According to the WSJ, members of Trump’s COVID task force had been considering lifting the travel ban for awhile, believing that restrictions “did little to help the U.S. with the virus already circulating widely here.” Officials in the UK and Europe had also been in favor of lifting restrictions. This wasn’t Trump going rogue, in other words, this was an international consensus fueled by aggressive lobbying by airlines and even endorsed by the CDC. “We learned that the opening strategy of banning locations and asking about exposures and doing fever checks just didn’t cut it,” said one CDC official last week.

What I don’t understand is why the emergence of the dangerously transmissible new variants of the virus in the UK, South Africa, and Brazil didn’t scramble the equation for any of them. It’d be one thing if the entire world were in the grip of the same widespread strain; in that case, there’s little additional risk in letting foreigners in so that they can seed new outbreaks. Those outbreaks are already being seeded, rampantly, by Americans. But at a moment when there *are* new variants and we’re in a race against time to get as much of the public vaccinated as possible before those variants become dominant here, it’s bizarre that the White House would risk letting foreigners carry those variants into the U.S. The new protocol about requiring a negative test before flying internationally also makes no sense to me. If you have a three-day window before you depart in which to take that test, it’s possible that you’ll test negative on Wednesday, be infected by the UK variant on Thursday while you’re out and about in London, and then fly into the U.S. on Friday, ultimately infecting dozens of others while you’re here.

The variants are nothing to mess around with:

It’s still early, and data on the variant in Brazil are particularly sparse. In addition to sharing certain mutations, though, these variants [UK, South Africa, Brazil] simply have a large number of mutations, some unique to each variant. Gaining a whole suite of mutations quickly should be a very uncommon event. But with the virus so widespread right now, very uncommon events will happen—and will happen more than once. The usual two-per-month mutation rate may undersell how the coronavirus can mutate in unusual situations. “It’s a little bit of a wake-up call,” Kristian Andersen, a microbiologist at Scripps Research, told me…

The variants may have evolved in immunocompromised patients who were infected with the virus for months. Normally, Hodcroft says, “your immune system is going to town on it. It’s really trying to beat it up.” But immunocompromised patients mount weaker immune responses. “It becomes almost like a training course for how to live with the human immune system,” she says. That may be why these variants have so many new mutations at once, as if a year or two of evolution has been compressed into months. This is probably quite rare, but with tens of millions of infections around the globe, rare things will show up.

Imagine what other mutations are yet to emerge this spring on this compressed evolutionary schedule. The CDC already suspects that the UK variant will be dominant in the United States within a matter of weeks, and scientists suspect that the South African and Brazilian variants may be better at evading antibodies than the common strain of SARS-CoV-2. Anything we can do to slow the spread of those strains right now while vaccination ramps up is obviously for the best. That starts with not letting in travelers who might be carrying the strain so that they can seed outbreaks of it here.

On the advice of our medical team, the Administration does not intend to lift these restrictions on 1/26. In fact, we plan to strengthen public health measures around international travel in order to further mitigate the spread of COVID-19.

The good news is that Team Trump really does appears to have intended this as a symbolic gesture. The executive order lifting travel restrictions doesn’t take effect until next Tuesday, when the new policy about testing travelers before they fly also takes effect. Biden’s going to rescind Trump’s order before then. The bad news is that all of the new variants are already here and spreading. Keeping out infected foreigners will slow that spread but it’s a matter of time before we have a massive new spike — unless vaccinations ramp up faster than the variants do.

Will Court Packing Threat Keep SCOTUS From 2A Cases?

Prosecutor vows to bring charges against college students who rioted in Boulder, Colo.

Portland Can Relax. The 'Enhanced Community Safety Team' Is on the Job