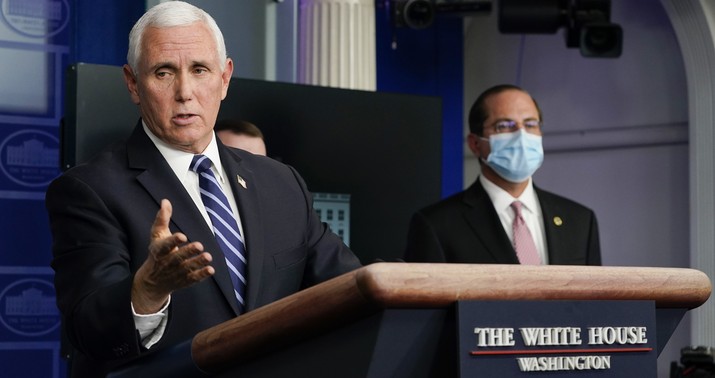 Our new president is just killin’ it in carrying out his duties lately. Yesterday he chaired a FEMA meeting and visited the National Guard stationed outside the Capitol. This morning he was back in front of a crowd doing president stuff again:

His most presidential — or statesmanlike, or just minimally decent — act so far, though, was dialing up his opponent today and finally congratulating her on her victory. If there was any doubt left that the Trump/Pence divorce was final, this news should erase it.

Although I suppose the divorce was officially finalized last week when a mob egged on by his boss tried to, you know, murder Pence and his family.

Vice President Mike Pence telephoned Vice President-elect Kamala Harris Thursday to congratulate her and offer his assistance ahead of next week’s swearing-in, the latest indication that Mr. Pence is filling the leadership role all but abdicated by President Trump.

The conversation, which was relayed by two officials briefed on the call, was described as gracious and pleasant. The discussion is the first time Mr. Pence and Ms. Harris have spoken since they debated each other last fall…

Mr. Pence and his wife, Karen, may have Ms. Harris and her husband, Doug Emhoff, to the vice-presidential residence before the inauguration on Wednesday, according to one official. But those plans remain uncertain, in part because of the security threats posed to the nation’s capital have made scheduling fluid.

That’s the duality of Mike Pence. On the one hand, he’s perfectly capable of behaving like the gracious, traditional Republican politician that he is. On the other hand, we’re now one month and one day removed from the electoral college formally electing Biden and Harris. It took him 32 days, and 73 since Election Day, to finally get around to congratulating Harris because helping his boss sustain the murderous “stop the steal” fantasy was a higher priority for him than doing the right thing.

What’s unusual about Pence phoning Harris and agreeing to attend the inauguration next week is that it means he acknowledges that his political career is over, a reality which most pols typically don’t embrace until they’re forced to by losing an election. It’s easy to imagine Pence telling himself after certifying Biden’s victory last week, “Okay, look. Things are really, really, really bad right now, with a not insignificant percentage of your own party’s base wishing you dead. But just lie low, make loyalist noises about Trump in public, and hope that in time MAGA fans will calm down and remember that you were Trump’s most devoted supporter for 99.99 percent of his term.” That wouldn’t be true — Pence will never rehab his image among “stop the steal” diehards — but politicians are forever in denial about their prospects.

Pence seems to see his situation clearly, though. He’ll never be president now. The insane loyalty test Trump ultimately forced on him, demanding that he facilitate an honest-to-goodness coup by refusing to accept the electoral votes for Biden, was unpassable. He’s finished. In which case, he might as well own it and rehab his reputation among Democrats and anti-Trump Republicans to whatever extent he can by being gracious in his duties the rest of the way.

Which makes me wonder: How close are we to Pence saying publicly that Biden and Harris won the election fairly? If he’s turned his back on MAGA, or rather MAGA’s turned its back on him, then there’s nothing left to lose by doing so. In fact, there may be something to gain. Watch this clip with Trump DHS appointee Ken Cuccinelli assessing the current domestic terror threat:

"That is definitely one of the narratives in the online chatter."

Acting Deputy DHS Secretary Ken Cuccinelli @HomelandKen says the narrative that Trump won the election (something Trump continues to tell people, according to the NYT) is a continuing threat. pic.twitter.com/8x0FMvN9lS

Trump has acknowledged that there’ll be a new administration next Wednesday and is making plans to leave town, but he has not conceded or said that Biden won fair and square. And because he hasn’t, some would-be domestic terrorists aren’t taking his admonitions against further violence to heart:

“Despite Trump’s speech yesterday we are still seeing excessive use of violent rhetoric and some organization of offline activity planned for the days around the inauguration, not only in Washington, D.C., but also other cities spread across the U.S.,” said Chloe Colliver, head of the research unit at the Institute for Strategic Dialogue, a think tank that tracks online extremism…

At the root of these extremists’ continued fervor is a key observation: Trump still has not acknowledged that the election was legitimate and admitted his defeat to Biden. In his video on Wednesday, the president did not acknowledge he had lost the November election. And by not doing so, the outgoing president is seen as giving tacit approval to his followers’ plans to wage war against the political establishment.

In the hours after Trump’s video was released on Wednesday, Telegram channels with thousands of subscribers started to post memes claiming the president’s words were an effort to hoodwink the media and Democrats, while urging his followers to keep preparing for potential violent clashes.

Trump won’t concede, so his more cultish fans have convinced himself that there’s still some uncertainty over whether Biden will take office or whether he’ll be the “real” president when he does. Having Pence at the inauguration is a small way to try to persuade them otherwise, although given the collapse of Pence’s stature among MAGA types since January 6, it probably won’t do even a bit of good. I think the urgent need for Republicans, especially populist Republicans, to legitimize Biden right now in hopes of undoing two months of propaganda before it kills more people also explains this surprising news:

All things being equal, I’m sure Team Biden would rather chew glass than have Cruz at the event after he did so much to stoke righty paranoia about the election. But as I say, every bit of buy-in they can get from Republicans on the legitimacy of the new administration is useful to them. They’d probably welcome Hawley there too for the same reason if he wants to attend. And he might, for the same reason Cruz is attending: They’ve done such damage to themselves outside the MAGA base with their certification stunt that being there at Biden’s swearing-in might be the only way to partially undo it.

But beyond that, it may be that Cruz recognizes the situation is now sufficiently dangerous that the effort to “deprogram” Republican voters about the election will require a team effort. He has an obligation to do his part in that, so he’s doing it. Let’s hope everyone ends up safe.