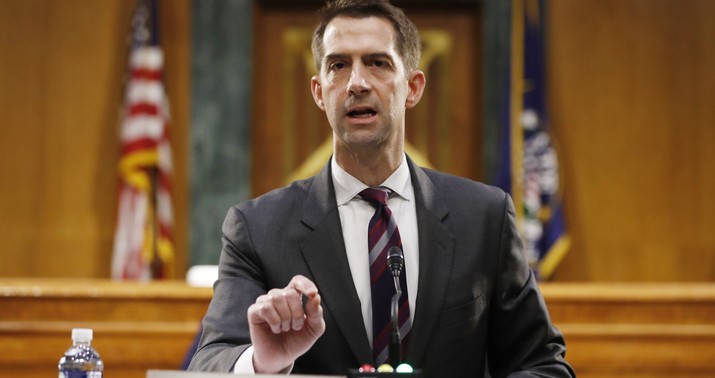 I have new respect for him after he refused to object to certification of the electoral college last week, a play that was bold at the time and seems smart in hindsight given the political fallout to his colleagues, Josh Hawley and Ted Cruz. His stance on the upcoming Senate trial feels like a “make-up call” for that decision, though. Cotton crossed Trump and MAGA on a big vote and he understands that he can’t keep on doing that and hope to stay viable as a future presidential candidate. So he’s atoning, somewhat. Yes to certifying Biden’s win — but no to convicting Trump and disqualifying him from future office.

He’s making the same cynical compromise Nancy Mace made yesterday in the House on impeachment. Mace also declined to join the House effort to object to Biden’s certification. That was a tough vote, and she evidently calculated that she couldn’t take a tougher one. So she came up with the same sort of dodge that Cotton did — a procedural excuse to oppose impeachment so that she didn’t need to defend Trump on the merits. In Mace’s case, the excuse was that impeachment was being “rushed” because it skipped the committee stage. In Cotton’s case, the argument is constitutional. Read Article II and you’ll find that the Senate can’t hold a trial on an official who’s already left office, Cotton claims — incorrectly.

But he’s willing to make that concession to MAGA to try to get back in their good graces. He can’t defend the substance of what Trump did — no one can, realistically — but he can certainly find a procedural pretext to arrive at the outcome Trump and his fans want.

“’There is no grievance that is a fit object of redress by mob law.’ Those words are as true today as when Abraham Lincoln spoke them. As I said last summer when mob violence gripped our streets, so I say again about the mob violence at our nation’s Capitol last week: those persons responsible should be held accountable in the courts to the full extent of the law.

The House has passed an article of impeachment against the president, but the Senate under its rules and precedents cannot start and conclude a fair trial before the president leaves office next week. Under these circumstances, the Senate lacks constitutional authority to conduct impeachment proceedings against a former president. The Founders designed the impeachment process as a way to remove officeholders from public office—not an inquest against private citizens. The Constitution presupposes an office from which an impeached officeholder can be removed.

That just ain’t so, historically or logically. As I wrote last night in another post, it can’t be that the president gets carte blanche to abuse his powers during his entire last month in office so long as he stops short of committing a statutory crime. According to McConnell, the *shortest* presidential impeachment trial in U.S. history was 21 days. Using that rule of thumb, it would mean that future presidents realistically could start committing impeachable offenses around Christmas during their lame-duck period, if not earlier. The House typically isn’t in session around the holidays, after all. And even if the House convened in an emergency session to impeach during the last week of December, the Senate probably wouldn’t start rolling until January. Within 20 days, the president would leave office due to the expiration of his term and the Senate would be powerless to punish him under the Cotton standard.

Even if the Senate hurried things up in that scenario to try to convict the president before January 20, the president could slip through an emergency escape hatch by resigning before the vote to remove. Upon his resignation, he’d no longer hold public office. He’d escape consequences again, per the Cotton standard.

That scenario’s already been tried, in fact. In 1876, Secretary of War William Belknap was en route to being impeached by the House. Knowing that, he he went to the White House and resigned; the House proceeded to impeach him anyway, not wanting him to be able to evade consequences just because the wheels of bureaucracy turn more slowly than the act of writing a resignation letter does. What the Senate will need to wrestle with is whether the Belknap precedent applies to Trump’s case. Trump isn’t *trying* to evade the consequences of impeachment and removal, as he hasn’t resigned. But he *will* evade the consequences if the Cotton standard is applied. Law prof Steve Vladeck argues in an op-ed today that it shouldn’t be:

[T]he disqualification power is both the primary evidence of and the central reason the Constitution allows for the impeachment of former officers. Were it otherwise, an officer facing impeachment, or an officer who has already been impeached and is about to be removed, could also avoid disqualification simply by resigning. In 1876, disgraced Secretary of War William Belknap tried exactly that — resigning minutes before the House vote on his impeachment. The House impeached him anyway, concluding that his resignation did not defeat Congress’s impeachment power. And although some senators ultimately voted to acquit Belknap (who narrowly escaped a guilty verdict) because he was no longer in office, the Senate as a body first concluded that it had the power to try former officers, adopting a resolution that Belknap could be tried “for acts done as Secretary of War, notwithstanding his resignation of said office” before he was impeached.

[Trump] is not going willingly. And he has made no secret of his interest in running for president again in 2024. What’s more, under the Former Presidents Act of 1958, he stands to receive significant financial and other tangible benefits, including a handsome annual stipend, funds for offices and a staff, and a pension. But that same statute denies such benefits to a former president who was removed “pursuant to Section 4 of Article II of the Constitution.” So whether Mr. Trump is impeached, convicted and disqualified determines not only whether he could ever again hold federal office but may also bear upon the extent to which federal taxpayers will be subsidizing his activities in the years to come.

Cotton’s point that the impeachment process isn’t designed to serve as “an inquest against private citizens” would be stronger if the House had waited to initiate impeachment proceedings against Trump until after he’d left office. We don’t want Congress wasting time on ex-officials — although, again, under that rule the president could conceivably commit abuses of power and then avoid accountability by resigning before the House can act. On the other hand, the House is able to move much more quickly than the Senate is: Impeachment is nothing more than an indictment, based on a simple majority vote. It can be done in a matter of days, as it was this past week. I could tolerate a standard in which a corrupt president evades punishment because the House moved too slowly to punish him. But in a case like the current one, where the House moved fast (although not as fast as it should) and the president’s still in office? It’d be perverse to let him walk scot-free just because he waited until he had two weeks left in his term to incite an attack on the U.S. Capitol.

Even so, I think the Cotton standard is destined to become the fashionable excuse for Republican senators who are too afraid to cross MAGA by voting to convict. The fashionable excuse for voting no during Impeachment 1.0 was “bad, but not impeachable.” Sure, Trump leaned on the president of Ukraine for a quid pro quo in which Ukraine would get defense funding and he would get a little dirt on the Bidens, but that’s not a clear-cut “high crime or misdemeanor,” supposedly. That logic won’t cut it for Impeachment 2.0, though, since incitement of an attack on Congress that left five people dead, including a cop, is most certainly impeachable. The excuse for voting no will have to shift to process: “We can’t remove someone who’s no longer in office.”

I doubt McConnell will be able to find 17 Republican votes to convict in the end unless Trump or his more terrorist-minded fans do something nutty over the next month. That’s the virtue of McConnell slowing down the process rather than holding a snap trial, as some people want. A snap trial would be a logistical nightmare since the Capitol may again be under siege over the next week and no one wants senators trapped inside conducting official business. More importantly, though, dragging out the trial gives the Senate some leverage over the president to make him do what he can to turn down the political temperature. If his fans attack the Capitol again, if Trump says something that makes them think they *should* attack the Capitol, if he issues a pardon to himself or to some of the insurrectionists currently facing charges for the January 6 attack, all of that will weigh on senators in deciding whether to disqualify him from future office. If he cares about that at all, he needs to behave as Biden takes power. Which makes me wonder if that wasn’t part of the reason why he cut that “no violence!” video last night.

Exit quotation from lobbyist Liam Donovan, marveling that the Senate GOP might not seize a chance to rid themselves of Trump: “It sure seems like the last, best chance to stand up to the guy while it still matters. Republicans can speak up now, or they can follow the path of least resistance, but at some point there will be a reckoning, and it will come at a political cost.”