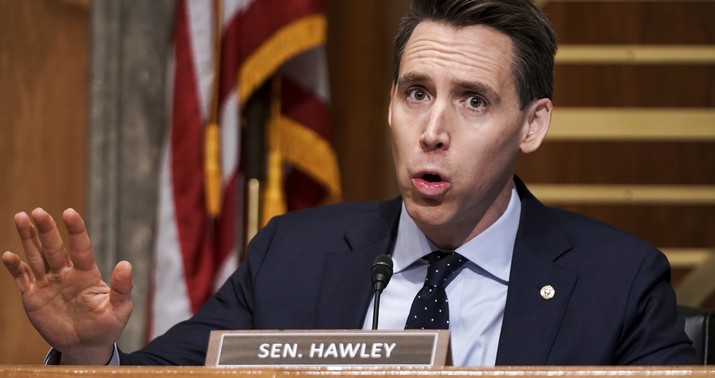 My strong intuition is that the answer to that question is no, just because it’s impossible for a Republican politician at this stage of the GOP’s decline to alienate his party by doing the wrong thing.

If you want to get the base and most of your colleagues in Congress mad at you enough to hold a grudge, you have to scandalize them by doing the right thing.

No worries about that with Hawley.

He wrote a column yesterday defending his objection to Biden’s certification last week. Turns out he stood up to the mob by, er, doing exactly what it wanted him to do:

[D]emocratic debate is not mob violence. It is in fact how we avoid that violence…

Some wondered why I stuck with my objection following the violence at the Capitol. The reason is simple: I will not bow to a lawless mob, or allow criminals to drown out the legitimate concerns of my constituents.

It takes elephant-sized balls to offer yourself as a hero of democracy after you’ve raised your fist in solidarity with a mob that would end up ransacking Congress and joined a group of objectors who, if successful in blocking Biden, would have wrecked American democracy and left the country unsalvageable. The mob wanted to prevent Biden from becoming president and Hawley did what he could to advance their goal, never mind what that would have meant for the votes cast by a majority of Americans in November.

The worst part is how slippery he is in ignoring the months of “stop the steal” propaganda pushed by Trump and his cronies, which go unmentioned in his piece. In a world where Trump had conceded to Biden early, Hawley’s objection last Wednesday would have been an eye-rolling nuisance like Democrats objecting to Bush’s certification in 2005. In the context of the president brainwashing tens of millions of people with conspiracy theories to believe that the election had been rigged, it was unforgivable. “To buy his defense, you just have to studiously ignore the context that made Hawley’s campaign so damaging and made it politically enticing for him to wage in the first place,” says Ramesh Ponnuru of Hawley’s column, correctly.

Hawley has the same problem Ted Cruz has. He’s a brilliant guy whose contempt for the intelligence of people around him is such that he thinks they don’t see through his schemes. But they do, and then they loathe him for his condescension.

Here’s the takeaway stat from the Axios poll: Josh Hawley underwater with Rs and not well liked even among Trumpy Republicans.

Those numbers are a career-ender! Except … no, they aren’t really. A 17/35 national rating isn’t a great place to start for a young politician but it’s not fatal. If Hawley has the basic good sense to abandon his painfully phony “angry Ivy League populist” bullsh*t and find a more suitable image…

Consistent with my early read on Hawley, which is that his natural lane was “Guy the establishment likes, but MAGA tolerates.” Now looks stuck in the middle with former loathing him and latter not caring much. https://t.co/OjZtGxd1ex

…then he could recover. He’s only 41. In time, he’ll be able to get away with the spin that he was young and stupid to explain last week. But that requires him to stop desperately grasping for grievances he can exploit to signal that he too is a victim of the same persecution facing you, the common man. He’s one of the most privileged people in America. He should embrace it, drop the angry-guy shtick, and fill the niche of the well-meaning patrician politician who’s earnestly trying to use his power to make things better for the working class. If he wants to do the “angry populist” thing sporadically, that’s fine. Going forward, it’ll probably be the case that any Republican presidential nominee will need to appeal to the MAGA wing and to the other wing. Right now, Hawley seems to be thinking only of the former. That’s a mistake. And after the beating he’s taken from donors and mentors over the past week, he must realize it.

The 24/68 number in the Axios poll is more daunting, but look. If the Trump era teaches us anything, it’s that you don’t need to be very popular to contend in general elections. Negative partisanship will keep you in the game. Trump was historically unpopular when he ran in 2016 and ended up winning. Hillary Clinton was desperately unpopular in her own right and still got more votes than Trump did. In the end, Trump was beaten by a guy whom no one loves but whom enough people are okay with that they handed him the single biggest vote haul in American history, a reaction to Trump’s unpopularity. Hawley should take a lesson from that. He’s never going to be the center of an ardent cult of personality the way Trump is, and once he realizes it he’ll hopefully stop pandering incessantly to MAGA fans. What he needs to be is broadly acceptable. Do the MAGA thing on policy to build goodwill there but tailor your message to the centrists who might be leery of populism to earn some credibility with them. That’s coalition-building. Angry guys are a dime a dozen on the right. Be the calm guy who knows what he’s talking about and is willing to put his skills to use for blue-collar voters.

I don’t know. Am I just asking him to get a personality transplant? Easier said than done. But if he needs to be incentivized, he should remember this: There *are* candidates who’ll be aiming squarely for the moderate vote in the next primary. If Hawley, Cruz, Cotton, the QAnon Shaman, and a hundred other candidates are all carving up the populist vote, that moderate hero could be formidable. Hawley shouldn’t leave those centrist voters on the table for someone else. First step: Stop taking a dump on the legitimacy of American elections with pernicious self-serving populist stunts and be a proper legislator.