Dem reps’ letter: We reported suspicious tours of the Capitol to security the day before the attack 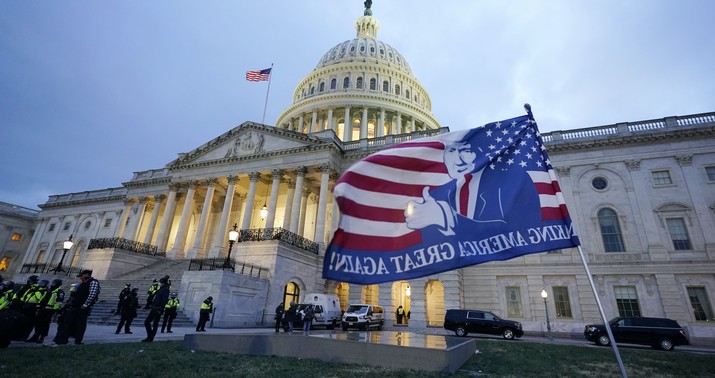 A follow-up to this morning’s post. I still have no sense of whether there’s something to this or if it’s just Democrats feeling paranoid about MAGA Republicans after the Capitol riot and assuming the worst about their motives.

But the fact that they allegedly reported the tours to security the day *before* things got ugly suggests this isn’t a case of innocent events looking sinister in the aftermath of trauma. The Dems who signed this letter claim they thought something was fishy even before the sun rose on January 6.

Whatever the truth turns out to be, the fact that members of one party are accusing colleagues from the other party of seditious conspiracy in a mob scene that left five people dead is … newsy.

Today I joined with more than 30 of my colleagues in requesting an investigation from the Acting House SAA, Acting Senate SAA, and USCP into the suspicious behavior and access given to visitors to the Capitol Complex on Jan. 5, 2021 – the day before the attacks on the Capitol. pic.twitter.com/zpPUSUuSrj

This is unusual for several reasons, including the fact that access to the Capitol Complex has been restricted since public tours ended in March due to the pandemic. We found these tours so concerning that senior staff questioned the SAA on January 5 about what was taking place.

The letter never explicitly accuses Republicans of organizing the tours but does say at one point that only permission from a member of Congress or their staff could have allowed such “unusually large groups of people” access on the 5th. The Occam’s Razor explanation would be that there were big groups that day because the freshman class had just been seated two days earlier and some of the new members wanted to show off their new digs to constituents who were in town for Trump’s rally. That would be painfully shortsighted, if so, since it was foreseeable that the rally might turn violent and knowledge of the Capitol’s interior might facilitate an attack. But we needn’t assume the worst, that some members of Congress were in league with the rioters, to explain why they invited people into the building.

Then again, Lauren Boebert was sending tweets like this on the morning of the 6th. Go figure Dems want the tours investigated:

BuzzFeed interviewed officers from the Capitol Police about the horrendous breakdown in security, which those officers laid squarely at the feet of management. Do you think members of Congress could have played a part in the attack, they were asked? Answer: “Two of the officers who spoke to BuzzFeed News said it wouldn’t surprise them if lawmakers had been involved. ‘There are definitely some members who need to be held to account once an investigation shows the totality of circumstances,’ one said.” It feels like that’s based on something more than mere conjecture about whether Republicans’ MAGA sympathies might have led them to conspire, but if it is, they’re not letting on.

Maybe Sherrill and other Dems know something that they’re not sharing publicly because it might compromise an investigation? Again, it seems strange that Pelosi would go so far as to introduce metal detectors outside the House chamber based on something as thin as “there were some big tour groups on the 5th.” Conceivably the FBI is asking suspects who are in custody right now whether they had any contact with members of Congress — or the White House — before the attack. Who knows what they might be hearing?

One other thing. It’s not just the Capitol Police and the sergeants-at-arms in the House and Senate who are being asked to look into this. GAO is also investigating “the roles that members of Congress may have played in inciting the mob,” although I think that refers more to rhetorical support — like Boebert’s tweet — than to active participation in a plot to attack the Capitol. Here’s where that rhetorical support has gotten us:

The deadly breach at the Capitol last week will be a “significant driver of violence” for armed militia groups and racist extremists who are targeting the presidential inauguration next week, according to a joint intelligence bulletin issued by federal authorities…

The federal officials wrote that extremist groups have viewed the breach of the Capitol as a success and have been galvanized by the death of Ashli Babbitt, a QAnon follower who was shot by the police as she tried to enter the heavily protected Speaker’s Lobby, just outside the House chamber. The extremists could perceive that death as “an act of martyrdom,” according to the bulletin…

The federal officials also wrote that “the shared false narrative of a ‘stolen’ election,” the false claim perpetuated by President Trump, “may lead some individuals to adopt the belief that there is no political solution to address their grievances and violent action is necessary.”

Jihadis do love their martyrs. I’ll leave you with this clip of Democrat Val Demings, who’s asked at 6:15 whether she thinks members of Congress may have conspired in the attack — and doesn’t rule it out. For what it’s worth, Demings was chief of the Orlando PD before joining Congress. There had better be something to all these insinuations when the smoke clears or else it’ll amount to a smear campaign of unusually nasty dimensions.

Val Demings joins the chorus of Members of Congress suggesting that other Members may have aided the insurrectionists. pic.twitter.com/dics4z3DAE