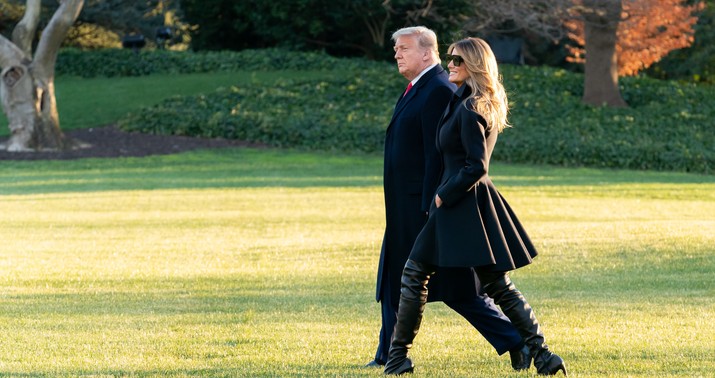 Look, he was getting banned on January 20 no matter what. They just sped up the process a little in case he felt tempted to, you know, try to overthrow American democracy again.

In the span of 48 hours, we’ve now seen both seats of federal power laid to waste.

Twitter says that his last two tweets, including the one saying that he won’t attend the inauguration, amount to “glorification of violence”:

President Trump’s statement that he will not be attending the Inauguration is being received by a number of his supporters as further confirmation that the election was not legitimate and is seen as him disavowing his previous claim made via two Tweets (1, 2) by his Deputy Chief of Staff, Dan Scavino, that there would be an “orderly transition” on January 20th.

The second Tweet may also serve as encouragement to those potentially considering violent acts that the Inauguration would be a “safe” target, as he will not be attending.

The use of the words “American Patriots” to describe some of his supporters is also being interpreted as support for those committing violent acts at the US Capitol.

The mention of his supporters having a “GIANT VOICE long into the future” and that “They will not be disrespected or treated unfairly in any way, shape or form!!!” is being interpreted as further indication that President Trump does not plan to facilitate an “orderly transition” and instead that he plans to continue to support, empower, and shield those who believe he won the election.

Plans for another mob attack are already being hatched online, Twitter notes, including some sort of “armed march” on Capitol Hill and state capitols on the 17th. Because they can’t trust the president not to egg that on, they’re pulling his mic. Just like they pulled the mics from Mike Flynn and Sidney Powell earlier this afternoon. In 12 days Democrats will have total control of government; if any blood is spilled in a right-wing terror attack that was informally organized on social media and encouraged by Trump, even obliquely, the platforms where it was organized will have to answer to those same Democrats. Not to mention the wider public.

So Twitter’s washing their hands of Trump. Better safe than sorry. Now the president won’t have anywhere to rant at length, except, ah, the most-watched cable news network in America.

Mark Levin has already ditched Twitter in solidarity, which I suspect is the sort of thing Twitter was hoping would happen. They don’t want to lose users per se, but having the entirety of MAGA decamp for Parler will ensure that that site takes the heat if something crazy happens going forward, not them:

I have suspended my own Twitter account in protest against Twitter’s fascism. I ask all my followers to join me now on Parler and Rumble.https://t.co/XswC88juiGhttps://t.co/1YeTi0ywBk

Didn’t Trump basically renounce rabble-rousing with his video last night, you might wonder? Why ban him on the day after he finally, finally seemed ready to behave? Possible answer: Because he had already begun to regret giving last night’s statement, allegedly. In the end, he does what he thinks his base wants him to do. They don’t want him to concede, so it was a cinch that he would have started tweeting election crankery again before long:

Shortly after his White House video—in which a scripted President Trump acknowledged that a transition to a “new” administration was underway, but stopped short of even admitting that he indeed lost fairly to his 2020 Democratic opponent—posted online, Trump started having second thoughts. Throughout the evening, the outgoing, increasingly authoritarian leader of the free world quizzed close advisers and White House officials about whether or not he did the right thing and if the reception from the public, the media, and his supporters was “good,” according to two people with direct knowledge of the conversations on Thursday. He asked if his supporters felt let down…

On the pro-Trump forum “The Donald,” some Trump supporters saw the video as proof Trump had abandoned them to the predations of a Democratic Party that will soon control the White House and both houses of Congress. A 4,000-comment thread reacting to Trump’s speech appeared to have been deleted by Friday.

Is there a shadow of a doubt that he’ll be posting incendiary garbage on Parler within the week? Is there any real doubt that some nut somewhere is going to do something violent before or on Inauguration Day in Trump’s name? If not, what does that say about the merits of Twitter’s decision to run away from him?

Speaking of last night’s video, Vanity Fair claimed today that Lindsey Graham had a hand in it, allegedly warning Trump that the Senate had the votes to remove him if he didn’t make a conciliatory statement. The odds that that was a bluff are north of 99 percent but maybe the president still doesn’t know the Senate GOP caucus well enough after four years to have understood that. Even if Ossoff and Warnock are seated next week, Schumer would still need 17 Republican votes to convict and remove. Assume Romney, Murkowski, Collins, and Sasse all hop aboard. Where are the other 13 coming from?

Which Senate Republican would want to go to war with their own base when they could have Trump leave office in mere days the old-fashioned way simply by doing nothing?

It was a bluff. But it was a crafty one by Graham, as it seems to have convinced Trump to finally turn down the rhetorical heat and move past the coup attempt.

According to one Republican briefed on internal conversations, Trump was swayed in part by Senator Lindsey Graham. The source said Graham called Trump yesterday and explained that there were enough Republican votes in the Senate to remove Trump from office unless he conceded the election and diffused tensions. “He told Trump that he had to say there would be a ‘peaceful transition.’ Those were the key words,” the Republican said. (In the video Trump said: “My focus now turns to ensuring a smooth, orderly, and seamless transition of power.”)…

Trump’s fear of legal exposure is also being driven by his conversations with White House counsel Pat Cipollone. A source close to the West Wing told me Cipollone warned staff on Wednesday that they could be at risk if they helped Trump fuel the riot.

Democrats weren’t appeased by the video and are circulating articles of impeachment — but that appears to be a giant bluff too. They’re not even moving forward on it tonight. Apparently the Rules Committee is “prepared” take it up next week. Every moment that passes brings us closer to January 20, and the closer we get to January 20, the less inclined Senate Republicans will be to spend political capital on a last-second impeachment. This is basically a stunt. And the military, quite rightly, resents being asked to do the dirty work of restraining Trump while Pelosi messes around with stunts:

But some Defense Department officials have privately expressed anger that political leaders seemed to be trying to get the Pentagon to do the work of Congress and Cabinet secretaries, who have legal options to remove a president.

Mr. Trump, they noted, is still the commander in chief, and unless he is removed, the military is bound to follow his lawful orders. While military officials can refuse to carry out orders they view as illegal, they cannot proactively remove the president from the chain of command. That would be a military coup, these officials said.

If Pelosi’s serious that another day with Trump as president is dangerous for the country, act like it. Impeach him instead of making a show of telling the public that you’ve discussed nuclear security with Mark Milley today. But even if she did move to impeach tonight, the Senate calendar may make it impossible to remove Trump before his term expires on January 20. Yeah, granted, they could probably still proceed with the trial and convict him even after he’s left office, but Biden won’t want to start his term with a Trump impeachment trial in progress.

So they’re not going to do anything in the end. But having the threat hanging over Trump’s head puts a little pressure on him to resign, which is what both the House and the Senate really want him to do. That’s the only way he leaves early in which MAGA will have to blame him rather than the Democrats or Republicans for his departure.

I’ll leave you with this thought, which is perfectly correct, followed by a prime example of a disgusting totalitarian tweet defending Uighur internment that hasn’t been removed despite many complaints about it. Twitter’s going to have to enforce its rules evenhandedly now. Righties will be watching.

To be honest I am not sure how Twitter can now justify not banning the leaders, ministers and propagandists of the world’s most repressive regimes such as Iran and China, many of whom ban their people from having access to Twitter

Study shows that in the process of eradicating extremism, the minds of Uygur women in Xinjiang were emancipated and gender equality and reproductive health were promoted, making them no longer baby-making machines. They are more confident and independent. https://t.co/lykDhByEiL

Melania who? Apparently First Lady Jill Biden is bringing 'fashion back into the White House' at last

Will the market solve the social-media monopoly conundrum?