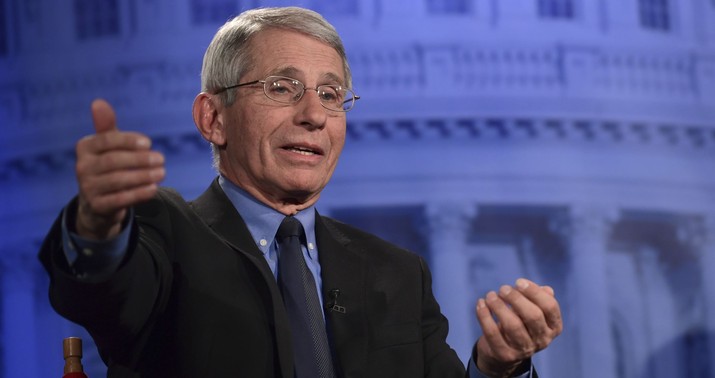 The first week of January isn’t typically newsy but the Sunday shows have no fewer than three major stories to juggle this morning. Most pressing is the alarmingly slow rollout of the COVID-19 vaccination process, especially with the highly transmissible British variant of the virus now spreading in the U.S. The feds will offer an array of guests to comment on the subject this morning … even though none of them are directly responsible for supervising vaccinations. It’ll be Anthony Fauci on “This Week” and “Meet the Press,” Moncef Slaoui on “Face the Nation,” Surgeon General Jerome Adams on “State of the Union,” and White House testing czar Brett Giroir on “Fox News Sunday.” Questions for each: Why are we off to such a slow start and how do we speed things up? Should we abandon the federal prioritization scheme and let anyone who wants the vaccine get the shot in order to rapidly increase population immunity? And should we continue to hold back half the doses distributed so that people who’ve received their first shot can get their second in a timely way, or should we administer every dose currently on the shelves and hope that second doses will be available in three to four weeks?

There’s now a genuine split among scientists on that last question due to the slow pace of the vaccination rollout. Fauci’s in favor of holding back half the doses, not wanting to depart from the timetable set out by Moderna and Pfizer. He’ll be asked whether that’s wise at a moment when deaths and hospitalizations are at all-time highs and the country desperately needs to immunize as many people as it can as quickly as it can, even if that means partial immunity via a single dose.

The second topic this morning is Tuesday’s Georgia Senate runoffs. Jon Ossoff and Stacey Abrams will talk to “State of the Union,” with Abrams also scheduled for “This Week” and “Meet the Press” to make a closing argument on behalf of both Democratic candidates. Neither Kelly Loeffler nor David Perdue is booked as I write this, but who can blame them? Any interview will involve uncomfortable questions about the divide within the GOP over $2,000 stimulus checks and Trump’s ongoing election challenges. Better to avoid an opportunity for airtime if it’s destined to lead to no-win answers.

Finally, Wednesday’s looming fiasco in Congress over whether to certify the results of the electoral college will be addressed by Sen. Pat Toomey on “Fox News Sunday.” Toomey reportedly delivered a “forceful denunciation” of Josh Hawley’s plan to object to the election results during a Senate caucus conference call a few days ago. Presumably he’ll repeat that denunciation this morning, particularly since Hawley’s effort is focused on delegitimizing the results in Toomey’s home state of Pennsylvania. Will Toomey also speak in defense of his state’s process during Wednesday’s floor debate? Stay tuned. The full line-up is at the AP.