Did Trump get anything for agreeing to sign the COVID relief bill? 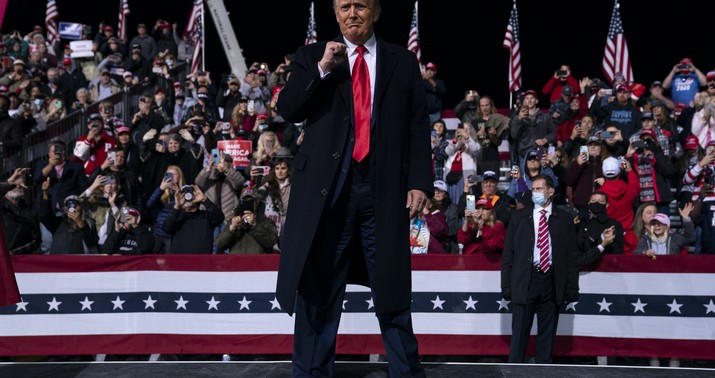 I was thinking yesterday that maybe he’d try to use his leverage over the must-pass-immediately COVID bill to try to wrangle GOP support for his position on the must-pass-but-maybe-not-for-a-few-weeks defense bill. He vetoed that one, remember, partly because it didn’t include Section 230 repeal and partly because it authorized the Pentagon to rename bases named after Confederates. The House is voting today to override his veto and the Senate will vote this week. If both votes succeed with two-thirds majorities, as is likely (but not certain), it’ll be the legislative equivalent of a kick in the pants to Trump on his way out the door.

That made me think he might swing a deal with McConnell and McCarthy. “I’ll sign the COVID bill if you block the veto override on the defense bill. Then you can pass it when Biden takes office. I don’t care.” That would have let him save face on the defense bill, although it’d be weird watching a Republican president and a Republican congressional caucus go to the mat trying to block funding for … the military. Especially knowing that that funding was destined to pass next month anyway.

In the end, it seems Jazz was right last night. In return for signing the COVID bill, the president got … nothing.

WHAT A BIZARRE, embarrassing episode for the president. He opposed a bill his administration negotiated. He had no discernible strategy and no hand to play — and it showed. He folded, and got nothing besides a few days of attention and chaos. People waiting for aid got a few days of frightening uncertainty…

IN A STATEMENT, TRUMP said Congress will review Section 230, the statute governing social media companies? Pretty sure they’ve been reviewing it for a while. A “redlined” bill? Huh? He’ll never get the spending rescissions he’s asking for — like, zero chance, so don’t focus on this. They will review voter fraud? Sure thing, boss. And the Senate will begin the process of voting on $2,000 checks? Great. He will split the Republican Party on the way out the door. (Will it get 60 votes? Will senators even show up for this?) In his Sunday evening statement, Senate Majority Leader MITCH MCCONNELL didn’t even mention anything that TRUMP got in return for signing this bill.

THIS IS PROBABLY THE MOST FITTING coda to TRUMP’S presidency, and a neat encapsulation of his relationship with Congress. He never cared to understand the place and was disengaged from its work.

“I will send back to Congress a redlined version, item by item, accompanied by the formal rescission request to Congress insisting that those funds be removed from the bill,” he said in his signing statement, referring to the foreign aid provisions of the omnibus bill. But if I’m reading the relevant statute correctly, it doesn’t require Congress to do anything with his rescission request. It’s not a line-item veto, which would be unconstitutional. Essentially it’s just a list of recommended spending cuts from the president asking for expeditious attention from Congress. If Congress chooses to ignore him, those cuts don’t happen. The whole “redlined” thing in his statement, in other words, seems to be a way to save face by making it sound like he’s done something meaningful unilaterally when really all he’s doing is inviting Congress to act.

What ultimately moved him was that he got a bunch of panicked phone calls from Republican allies over the holiday asking, “You’re not really going to refuse to sign this, are you?” It may be that he didn’t realize all of the consequences that would flow if he refused, especially if he executed a “pocket veto” that ran out the clock on this session of Congress. It would mean millions losing their unemployment benefits and a government shutdown and a looming disaster in the Georgia runoffs and Congress having to start from scratch on the bill on January 3 when the new term began, which could have meant weeks of new negotiations while laid-off Americans starved. Press coverage of the potential consequences has been appropriately brutal too, brimming with quotes from average people about how quickly their lives will deteriorate if they don’t get help right now. “It’s a chess game and we are pawns,” said one single mother to the AP about the standoff in D.C. over the bill. Another woman said she had “One more month, if that. Then, I run out of everything.”

I think Trump realized there was no good outcome at this point. If he signed the bill after posting that dramatic video last Tuesday demanding $2,000 checks and stripping out the foreign aid parts, it’d stink of capitulation. If he vetoed it, Congress would immediately turn around and embarrass him by overriding his veto. If instead of vetoing it he ran out the clock on Congress’s session, forcing them to start over on January 3, he’d be savaged by all sides for an act of petulance that left millions of working-class people in ruins. The least bad option at this point was to eat sh*t and sign it. Good work by the many Republicans who spent the last few days successfully convincing him of that:

The deal was closed on a Sunday afternoon phone call with Trump, Treasury Secretary Steven Mnuchin and House Republican Leader Kevin McCarthy. “This is good,” Trump finally said, an official familiar with the call told me. “I should sign this.”

How it happened: Over many days, Mnuchin and McCarthy — aided by Sen. Lindsey Graham (R-S.C.), who golfed with Trump in West Palm Beach on Friday — indulged the president’s rants, told him there was great stuff in the bill, and gave him “wins” he could announce, even though they didn’t change the bill.

Playing to his vanity, they invoked his legacy, and reminded him he didn’t want to hurt people.

They convinced the author of “The Art of the Deal” that he had shown himself to be a fighter, and that he had gotten all there was to get.

David Perdue also reportedly chatted with him, no doubt impressing upon him that he and Kelly Loeffler were DOA on January 5 if the president held up life-saving relief for people due to a spat with his own party over the size of individual payments. One notable figure who apparently did *not* speak to Trump was the second most powerful Republican in government, Mitch McConnell, which was wise on his part. McConnell doubtless understands that the reason Trump refused to sign the bill right away is because he’s pissed at Cocaine Mitch and John Thune for not supporting his effort to overturn the election anymore. If McConnell had dialed him up right now and said, “What are you doing?!”, it might have backfired and deepened Trump’s resolve not to sign. Having people like McCarthy and Graham whom he considers allies nudging him was the smart play. Lindsey’s four years of sycophancy may have paid off big in the end for a lot of desperate unemployed people.

I don’t think the president had a strategy when he posted that video last Tuesday demanding $2,000 checks. He hoped, perhaps, that throwing down the gauntlet in such a public way might spook reluctant Senate Republicans to buckle and approve his idea, which would have been a big (but verrrry belated) win for him. But he just didn’t have the juice left to make that happen. Maybe it’d have been different if he’d won reelection, but with Trump just 23 days from leaving office, Senate GOPers are back in “deficit hawk” mode. “If we went to $2,000 per person, the additional borrowing would be up to almost $500 billion,“ Mitt Romney said to a Utah business group last Wednesday. “Someone’s got to pay for that. We can’t just have free money.” It turns out that most of his Senate colleagues agree with him more so than Trump on that point. And because they do, the president was forced to either eat it on the bill or stick it to the American public by digging in on opposing it. He did the right thing in the end, thankfully.