Fauci: I’ve been lying to you about herd immunity 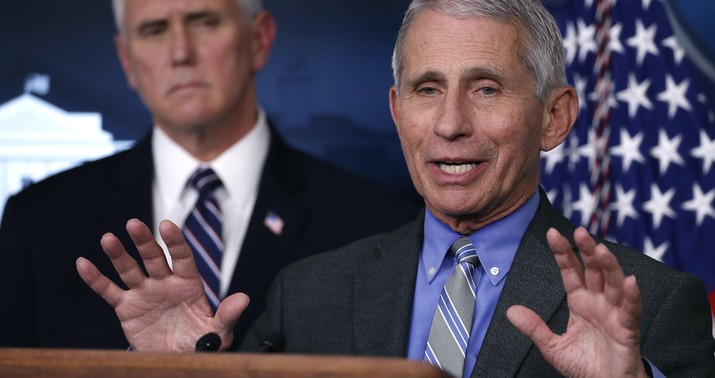 No, wait. Now that I think about it, I do remember.

It was … Anthony Fauci, back in June, admitting that Americans were deliberately given bum advice about masks early on in order to preserve the extant supply for medical professionals.

So, why weren’t we told to wear masks in the beginning?

“Well, the reason for that is that we were concerned the public health community, and many people were saying this, were concerned that it was at a time when personal protective equipment, including the N95 masks and the surgical masks, were in very short supply. And we wanted to make sure that the people namely, the health care workers, who were brave enough to put themselves in a harm way, to take care of people who you know were infected with the coronavirus and the danger of them getting infected.”

Recently the Times noticed that his estimate of how much of the population will need to be vaccinated before herd immunity sets in has begun to shift. Early on he said it’d be 60-70 percent. Lately he’s been saying “75, 80, 85 percent” or “75 to 80-plus percent.” Was he just being sloppy before or had something in the science changed since his initial estimate?

There’s been some new data, Fauci said. But also, he’s been lying all along:

In a telephone interview the next day, Dr. Fauci acknowledged that he had slowly but deliberately been moving the goal posts. He is doing so, he said, partly based on new science, and partly on his gut feeling that the country is finally ready to hear what he really thinks.

Hard as it may be to hear, he said, he believes that it may take close to 90 percent immunity to bring the virus to a halt — almost as much as is needed to stop a measles outbreak…

“When polls said only about half of all Americans would take a vaccine, I was saying herd immunity would take 70 to 75 percent,” Dr. Fauci said. “Then, when newer surveys said 60 percent or more would take it, I thought, ‘I can nudge this up a bit,’ so I went to 80, 85.”

The last person in government who should be lying to the public about anything is the lead spokesman for a national pandemic response, especially with a mass vaccination effort under way. Compliance with prevention measures requires trust — trust that onerous social-distancing rules are just and effective, trust that the vaccine is safe, trust that authorities are leveling with you about the risk and how soon the pandemic might end if follow the guidance. That’s why we all freak out when the likes of Gavin Newsom is caught dining out in defiance of his own COVID hygiene protocols. It’s not just that it makes him look like a hypocritical choad, it’s that people are destined to conclude from his behavior that gathering is less risky than it actually is.

Trust is essential. At least twice now, Fauci has given Americans good reason not to trust him by misleading them and then copping to it.

Reading the passage above, I thought back to his clashes with Rand Paul during Senate testimony this year. Paul warned Fauci that he may be an expert but his word isn’t law; elected officials write the rules for their constituents, not scientific bureaucrats. That’s correct, said Fauci. I’m a scientist, so my job is simply to give you the hard scientific truth and let you take it from there.

Except he hasn’t done that. He’s hidden the hard scientific truth in order to shape public opinion — twice, at least. He’s playing PR guy when, of all people in government, he should be dealing exclusively in facts and letting the chips fall where they may.

We’re left with an inescapable question: Was he lying about herd immunity before or is he lying now? I don’t grasp the logic of lying to Americans about this earlier. Whether herd immunity sets in at 60-70 percent or 75-85 percent, the takeaway for the average joe is that most of us will need to get the jab in order to squash the virus. The point of lying, I assume, was to give the public false hope that the path to pre-pandemic normalcy was a bit shorter than it actually is, but for most of us the difference between a 70 percent immunity threshold and an 85 percent threshold is meaningless. The bottom line is that a great majority of the population will have to be vaccinated before it’s party time and thus we all need to do our part.

So why lie? Why be cute about the numbers? If anything, I’m led to wonder whether Fauci is lying now by artificially inflating the number needed for immunity because he thinks raising the bar might encourage fencesitters to bite the bullet and get the vaccine. Now that we know that he’s practicing social engineering via deceptive public comments, everything he says can be questioned in those terms.

As for the new data that supposedly influenced his assessment, I’m guessing it has to do with the new strain of coronavirus propagating in the UK. “The more transmissible a pathogen, the more people must become immune in order to stop it,” the Times notes. That UK strain is allegedly 70 percent more transmissible than the current dominant strain and it’s almost certainly already here. Scientists who’ve examined it closely are saying “whoa” — literally:

Michael Worobey, a biologist at the University of Arizona, has seen more than 100,000 different strains of the virus that causes Covid-19. But when he saw the new variant from the UK, he noticed something different.

“This is the first variant I’ve seen during the whole pandemic where I took a step back and said: ‘Whoa,'” he remembers…

“This virus has like 17 unique mutations that haven’t been seen elsewhere, and that is really unusual,” Worobey said.

At least one of the mutations on the spike protein has turned up in different parts of the world, suggesting to scientists that that mutation really does provide the virus with an evolutionary advantage. There’s no reason to panic yet: Pending further study, the scientific consensus seems to be that the vaccines might be a bit less effective against the UK strain but still strongly effective. The situation may be bleaker, though, for monoclonal antibody treatments, which were given to Trump, Chris Christie, and Rudy Giuliani when they were sick with COVID. “A December 1 preprint study found that the mutations [in the UK strain] drove changes to a segment of virus that lies very close to the regions recognized by monoclonals made by the pharmaceutical companies Eli Lilly and Regeneron, making it more difficult for the antibodies to bind and neutralize the pathogen,” Scientific American reported today.

By the way, with a week still to go, December is now the deadliest month of the entire pandemic for the United States, with 57,683 Americans killed by COVID through last night. The total number of Americans killed in theater in the decade-long Vietnam War: 58,220.

'Where does that leave new parents?' Popular baby sleep expert found to have donated to Trump campaign