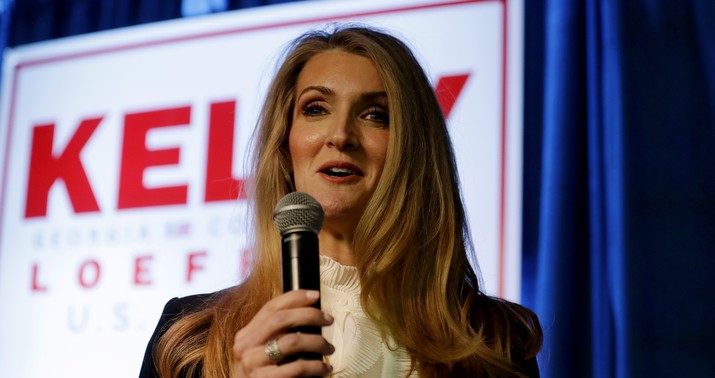 Let me suggest to you that it’s an open question at the moment whether the president really wants Kelly Loeffler and David Perdue to win their Senate races next month.

Yes, I know he went down there to campaign for them not long ago. And yes, I know he said he’ll be back on January 4, the night before the runoffs, to campaign for them again. But don’t be so sure: He’s already canceled one trip to Georgia recently in a fit of pique towards Brian Kemp. And the event he held for Loeffler and Perdue several weeks ago came at a point in the post-election process when he still had various conceivable paths open to him to overturn the election. (I mean, not really, but in his mind he did.) His court challenges were proceeding. He was twisting the arms of state legislators to invalidate their election results. The electoral college hadn’t met yet. SCOTUS hadn’t considered the Texas lawsuit yet.

He still had hope, however foolishly, of winning a second term. And therefore naturally he’d want a Republican majority in the Senate to advance his agenda.

Things are different now. SCOTUS has ruled. The electoral college has met. The court challenges and arm-twisting have fallen off. Mitch McConnell has recognized Biden as the president-elect and John Thune has said there’s no hope of Congress undoing the election results on January 6. Reality seems to have set in for the president — to some degree. He may not have reached the point of full acceptance yet but he’s certainly reached the point of, “Wait, I’m probably not going to pull this off, am I?”

In which case, what reason does he have to want Loeffler and Perdue to win? If he’s now declared war on the GOP and is looking to punish McConnell and Thune for their “disloyalty,” why would he want Republicans to win the Georgia Senate runoffs and hand McConnell a majority? Why wouldn’t he want to see them both lose so that McConnell is relegated to minority leader?

Better for Trump to boycott the race and sulk. If Loeffler and Perdue lose, he can point to the outcome and say, “See what happens without me, when my fans get demoralized?” If they win, he can say, “It’s all thanks to the rally I held there on December 5.”

Bear all of that in mind as you consider the predicament in which he’s left Loeffler and Perdue. What do they do now that the president’s rolled a grenade into the tent by demanding $2,000 checks *after* the COVID relief package has already passed? Do they stick with McConnell and Senate Republicans by insisting that $600 is plenty, potentially pissing off Trump and his fans? Or do they show loyalty by joining his demand for bigger checks, irritating fiscal conservatives who have been using this negotiation to try to draw a line in the sand on spending before Biden is sworn in? All of which is a fancy way of saying that we really do have two parties now, the Trump party and the McConnell party (for lack of a better term), and every Republican in the Senate will be forced to say which one they’re part of. Most get to wait until January 6 before declaring themselves. Loeffler’s on the ballot on the 5th, though, and doesn’t get that luxury.

“I’ll certainly look at supporting it if it repurposes wasteful spending toward that,” she said at a campaign event…

Loeffler voted for the bill, which passed with large, bipartisan support. It’s unclear what will happen next with the bill.

That’s probably the best non-answer she could have given under the circumstances, with a nod to both Trump and fiscal hawks. But it raises the question of why she voted for the bill in the first place. If she wanted bigger checks and less wasteful spending, she could have crusaded on that point. Raphael Warnock might well ask, “If she cares about American families, why wasn’t she pushing for bigger checks and less pork all along?”

And in fact he is asking that:

This sounds like a no from billionaire Senator Loeffler. Georgia families can't wait. $2,000 checks should be passed now. https://t.co/zFG8JXhTnj

Every Republican in Congress was boned by Trump’s decision to start negotiating — publicly — against his own party last night after they’d just wrapped a months-long negotiation with Democrats, but no one more so than Perdue and Loeffler. McConnell explicitly told his caucus last week that it was important to make a deal on COVID relief because failing to do so could wreck their chances of winning in Georgia and holding the majority. What do they do now to keep all sides of their coalition happy less than two weeks out from Election Day after the president’s gone and driven a wedge?

Official at FreedomWorks, the conservative group, on POTUS' push for $2K in checks:

"Trump is surrendering the argument on universal basic income … You are not better than AOC right now"https://t.co/sM5FZq6DXo

“Only Trump could take a final big win for his administration and in a fit of illogical madness disown any credit he’ll ever get for it,” said one senior GOP official to WaPo. “To the extent that Trump’s bizarre ramblings contribute to any negative feelings for Republicans, Perdue and Loeffler are the ones who will ultimately pay the price.” And it’s not just the COVID relief bill that Trump has blown up. He detonated the defense spending bill too this afternoon, another bit of spite that leaves Loeffler and Perdue with no easy choices:

The president just vetoed a defense bill that included a major, long overdue pay raise for our men and women in uniform. Kelly Loeffler needs to say today that she will override his veto and support this pay raise for our troops. https://t.co/a2aTmGV1mY

Oh well. It’s not like there are lots of military families in Georgia.

But wait. It gets weirder:

Trump campaign is going on radio in GA with a substantial buy with an ad talking about its allegations of election fraud, per a buyer and a campaign adviser. Also in MI and AZ and Wisc, as well as on OAN and Newsmax

Why the hell would they run ads in states where the results have already been certified and the electoral votes have already been cast? Why not run ads for Loeffler and Perdue instead? “Why should people go out and vote for Loeffler and Perdue if they believe the election is rigged?” asked reporter Yashar Ali, hearing of the new “stop the steal” ads. The last thing Trump and his campaign should want Georgia Republicans thinking as they weigh whether to bother voting on January 5 is that the system is trash and their votes might not actually be counted. It makes no sense for them to run those ads — if their goal is to see the two Republican candidates elected.

But what if it isn’t? What if my theory is correct that, for his own selfish and vindictive reasons, Trump is now indifferent at best and opposed at worst to seeing Loeffler and Perdue win?

The House GOP held a conference call today that ended up leaking to reporters, with one Republican heard to say that Trump had thrown them under the bus. That turned out to be Don Bacon of Nebraska. Bacon has since owned up to it and doubtless speaks for many, many, many of his colleagues in this statement:

Stmt from Rep. Bacon, when asked about these comments > "I stand by what I said. The President’s Secretary of Treasury helped negotiate this bill and encouraged us to support it. Furthermore, the President was updated on this bill every step of the way by GOP Leadership…" https://t.co/1eCwbsHDtG pic.twitter.com/YvTfNeacSB

The president was updated every step of the way on Mnuchin’s $600 check negotiations and the president’s own budget contained many of the spending items he complained about in his video statement last night. Ultimately, Bacon’s asking the same question every other Republican in Washington is asking: Why. Didn’t. Trump. Object. Sooner?

But we all know the answer. He didn’t object sooner because he’s fine with the $600 checks and fine with the other spending on the merits. He became un-fine only after McConnell and Thune gave up on his effort to overturn the election. The $2,000 check demand is just his way of screwing them and the rest of the party. If that means Perdue and Loeffler go down as collateral damage, whatever. Serves Mitch right for not joining the coup attempt.

Erick Erickson published a post this morning claiming that he’s heard from private pollsters that GOP turnout is shaping up to be *big* on January 5. That’s probably true: It’s anyone’s guess how much the day-to-day drama that we political junkies obsess over filters through to people who don’t pay as much attention to politics. But if the COVID relief package blows up and Trump and the Senate GOP end up at each other’s throats to a degree that even casual political observers can’t ignore, the effect on turnout is totally unpredictable. The last 24 hours aren’t what Loeffler and Perdue wanted and they’re certainly not what McConnell wanted. But they are what Trump wanted.