What on earth was Brian Kemp doing at the White House Christmas party? 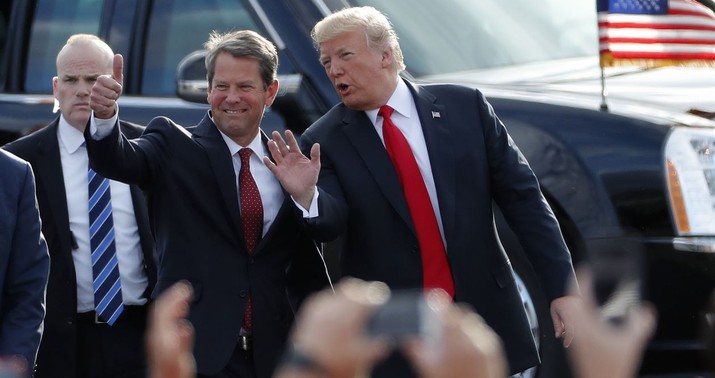 I meant to get to this yesterday but got sidetracked. In a year defined by relentless weirdness, behold one of the low-key weirdest moments of all — so weird, in fact, that some outraged MAGA fans insisted that it couldn’t be real. It must be a photoshop.

It isn’t, of course. It’s the real deal. But who can blame them in this case for being so incredulous about what they were seeing that a conspiracy theory seemed like the most plausible explanation?

Serious question: Did this guy crash the party?

All I can think is that some no-name White House staffer was told to send out invitations to America’s Republican governors and did so unthinkingly, not realizing that that didn’t mean all of American’s Republican governors. Imagine their boss’s reaction after the error was revealed, storming into that staffer’s office: “NOT KEMP AND DUCEY, MORON.”

For once, Jenna Ellis speaks for all of us:

Kemp attending the party is a unifying moment for a bitterly divided country. For Trumpers, it’s appalling to see such a “disloyal” Republican enjoying the president’s hospitality. For anti-Trumpers, it’s appalling to see a pol who’s been serially humiliated by Trump showing up to kowtow to him. For apolitical types, it’s appalling to see a governor attend a gratuitous social gathering without a mask as COVID is peaking nationally, when average Americans are being told to stay home for the holidays. And not just any gathering but a gathering in a building that’s had something like 50 separate outbreaks. It’s like showing up to a party at the Wuhan bat-virus lab.

For what it’s worth, Kemp’s spokesman claimed afterward that he and his daughter were masked up the entire time except for when they took photos.

But back to our question. What was Kemp doing there? Less than three weeks before Friday’s party, the president went on national television and said that he regretted having endorsed Kemp for governor in 2018. Four days before the party, Trump retweeted this bon mot from Lin Wood:

President Trump @realDonaldTrump is a genuinely good man. He does not really like to fire people. I bet he dislikes putting people in jail, especially “Republicans.”

He gave @BrianKempGA & @GaSecofState every chance to get it right. They refused. They will soon be going to jail. pic.twitter.com/7PMBLc8L2N

The very morning of the Christmas party, hours before Kemp and his daughter arrived, Trump described him as a “so-called” Republican:

The Secretary of State and Governor of Georgia, both so-called “Republicans”, aren’t allowing Fulton County to go through the vital Voter Signature Verification process. Also, they are not allowing Republican “watchers” to be present and verify! @BrianKempGA

Today the Daily Beast reports that Trump is already looking ahead with excitement to backing a primary challenge to Kemp in 2022:

According to two people who’ve discussed Kemp with the president this month, Trump has largely focused on how Kemp would be “nothing” without him or his endorsement in the 2018 gubernatorial primary. The president has also mentioned that he’s looking forward to fundraising and campaigning against Kemp in Georgia, in the likelihood that a GOP primary challenger emerges.

One of the sources said that Trump had privately compared his desire to see Kemp’s political future ruined to how he wanted to see the political implosion of his former attorney general, Jeff Sessions, during an attempted comeback this year in Alabama…

On Sunday, Donald Trump Jr. tweeted an encouragement for Herschel Walker, the former University of Georgia football star and GOP surrogate, to run against Kemp. “Think about it buddy,” said Trump Jr…

“I foresee the governor being OK,” said one prominent Georgia Republican, speaking on condition of anonymity due to the delicate political situation in the state. “I don’t foresee him getting beat in a primary. He may very well be primaried… That’s an uphill battle. You’re talking about millions of dollars to take out an incumbent governor.”

The most likely primary challenger is Doug Collins, who’d doubtless relish beating Kemp after the governor passed over Collins for Kelly Loeffler in filling an open Senate seat last year. Ironically, Kemp’s ace in the hole may be Stacey Abrams. Abrams got within a whisker of winning in 2018 and will certainly try again in 2022, this time knowing that there are enough Democratic voters in Georgia to deliver a statewide victory in a big race. She’ll have tons of money behind her and the enthusiastic support of her entire party, starting with President Joe Biden. She’s a stiff challenge. If Collins primaries Kemp, particularly with Trump’s support, hard feelings among the right in the general election could cost the GOP the race. And if that happened, with Trump propelling Collins to victory over Kemp and then Collins losing to Abrams, Trump’s prestige would be damaged. It would jumpstart a round of chatter about whether the party wouldn’t be better off in swing states with a less divisive presidential nominee in 2024. Trump would have to think about that before trying to take Kemp down — in theory.

In practice, though, no amount of logic will stop the president’s quest for revenge. Kemp behaved ethically in refusing to try to overturn Georgia’s election results and for that he must pay. If you could guarantee Trump today that his handpicked candidate would beat Kemp in a landslide in the primary and then lose to Abrams, I’m sure he’d prefer that to Kemp winning a second term. What does he care about the party? The party exists to serve him, not vice versa.

As for Kemp showing up to the White House Christmas party, grinning from ear to ear, I assume that he’s re-running the Jeff Sessions strategy for how to revive one’s political career as a Republican after angering His Majesty. Sessions’s strategy was simple: Just take the abuse. Keep your mouth shut. Hope that Trump cools off and then that his voters cool off too. No doubt Kemp’s telling himself that he has two full years to rebuild his standing among his state’s Republican voters, forgetting that Sessions had *three* years between the time he recused himself from the Russiagate investigation and his failed primary run in Alabama. Eventually, with the polls showing him trailing Tommy Tuberville, Sessions seemed to realize that letting Trump slap him around publicly for so long had left him a pitiful, emasculated figure and pitiful figures tend not to win popularity contests, so he finally began pushing back. But it was far too late — and, let’s face it, probably wouldn’t have worked even if he had started much sooner since criticizing Trump would have only deepened the “disloyalty” he’d showed.

There’s simply no way to fight back against a cult leader when you’re part of the cult. Either you take the abuse and hope that things get better in time, as Kemp is doing, or you punch back and end up expelled, like Mark Sanford and Justin Amash. Kemp has come to the rational but humiliating conclusion that fighting back would guarantee that his career is over whereas hugging Trump while Trump roundhouses him every day leaves at least a small chance at some timely future reconciliation. Trump could say, “I hope I live long enough to piss on the graves of Kemp’s children,” and Kemp would reply, “He’s a rascal. But seriously, I understand how emotional elections can be. I feel for him.” Remember, this is a guy whose family is being threatened with death by rabid Trump fans being egged on by the president’s rhetoric and he showed up to the White House Christmas party anyway. You can achieve high office in the post-Trump Republican Party or you can have an iota of dignity but you can’t do both.

Amazon Is Here for You America, as Long as Democrat Joe Biden Is in Office

National Guard Welcomed Back to Rest In Capitol, But More Comes Out On Why They May Have Been Booted