Report: Trump has told aides he might refuse to leave the White House on Inauguration Day 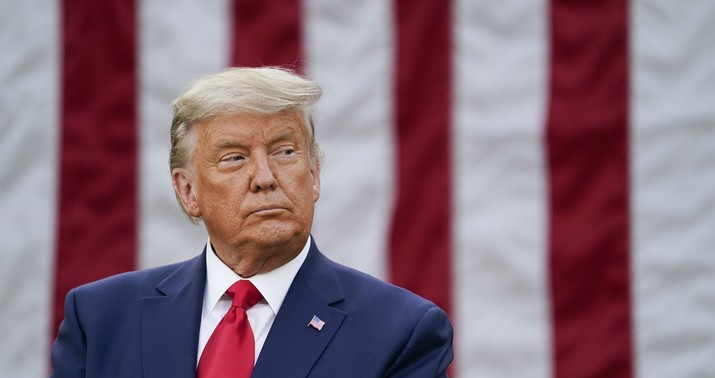 This is the first idea he’s had about resisting the election results that I support, just because it’d be fantastically funny watching it play out.

Imagine the news coverage. “It’s now 8 p.m. eastern time, eight hours since President Joe Biden was inaugurated, and as you can see from our live feed former President Trump is still seated at the Resolute Desk in the Oval Office in the dark with his arms crossed. Wait, hold on — we’re now getting word that the former president is threatening to hold his breath if the election results aren’t overturned. To repeat, he will hold his breath unless he isn’t sworn in for a second term immediately. Back to you, Jim.”

How would they remove him, exactly? Would they send out D.C. PD to the White House? *Bang bang* “Police. We have an eviction notice. Is there a ‘Donald John Trump’ inside?”

It’s the only way the series finale of this show can possibly do justice to the rest of it.

In his moments of deepest denial, Trump has told some advisers that he will refuse to leave the White House on Inauguration Day, only to be walked down from that ledge. The possibility has alarmed some aides, but few believe Trump will actually follow through.

While Trump had begun to privately accept the reality that he lost the election late last month, advisers say Trump has now reversed and dug in deeper — not only spreading misinformation about the election, but ingesting it himself.

“He’s been fed so much misinformation that I think he actually thinks this thing was stolen from him,” a Trump adviser said of the President.

Lindsey Graham should invite him for an early round of golf on Inauguration Day so that Biden can quietly change the locks while they’re out. The sense of betrayal the president would feel when he returned home only to find himself futilely jiggling the doorknob would be Shakespearean.

We should probably let him stay in the White House for awhile. He might have nowhere else to go:

Next-door neighbors of Mar-a-Lago, President Trump’s private club in Palm Beach, Fla., that he has called his Winter White House, have a message for the outgoing commander in chief: We don’t want you to be our neighbor.

That message was formally delivered Tuesday morning in a demand letter delivered to the town of Palm Beach and also addressed to the U.S. Secret Service asserting that Trump lost his legal right to live at Mar-a-Lago because of an agreement he signed in the early 1990s when he converted the storied estate from his private residence to a private club. The legal maneuver could, at long last, force Palm Beach to publicly address whether Trump can make Mar-a-Lago his legal residence and home, as he has been expected to do, when he becomes an ex-president after the swearing-in of Joe Biden on Jan. 20…

The current residency controversy tracks back to a deal Trump cut in 1993 when his finances were foundering, and the cost of maintaining Mar-a-Lago was soaring into the multimillions each year. Under the agreement, club members are banned from spending more than 21 days a year in the club’s guest suites and cannot stay there for any longer than seven consecutive days. Before the arrangement was sealed, an attorney for Trump assured the town council in a public meeting that he would not live at Mar-a-Lago.

He also signed an agreement with the National Trust for Historic Preservation deeding them the development rights to Mar-a-Lago in which he pledged not to use the premises as anything other than a club. Hmmmm.

Maybe he can live in the pool house in Jared’s and Ivanka’s new place in “Billionaire’s Bunker.”

Seriously, though, there must be something Ron DeSantis and Florida’s Republican-controlled legislature can do for him here. Yeah, I know, the Constitution’s Contract Clause makes that potentially sticky, but if the state government can shut down businesses over COVID, it can probably grant a former president the right to live at his own farking property. DeSantis is so eager to pander to Trump and Trumpers that he still won’t describe Biden as the president-elect. You think he isn’t going to pull some strings on the Mar-a-Lago snafu to try to earn Trump’s endorsement in 2024 or 2028?