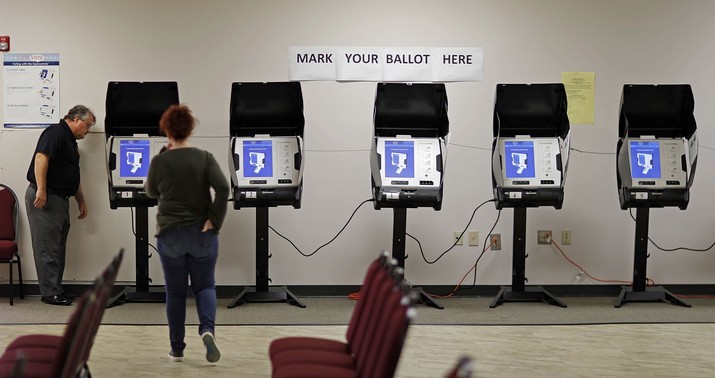 I make no judgment about the specifics of their claims against the three networks, as I haven’t seen the allegedly defamatory reporting and Smartmatic doesn’t describe it in its press release. Mediaite has a copy of the letter the company sent to Fox, flagging statements made on the network by Rudy Giuliani, Sidney Powell, and others.

But as a general matter, I think the logic of the “Streisand effect” that typically discourages defamation suits doesn’t apply to the current moment, where companies like Smartmatic and Dominion Voting Systems are being ruthlessly demagogued by conspiracy theorists as culprits in systematic election fraud. This isn’t a case of people being “sloppy” in their recitation of facts and injuring the companies’ reputations. It’s an out-and-out smear campaign aimed at shifting blame for Trump’s defeat from the president himself to villains various and sundry.

You can’t reason with that. You can’t appeal to their decency by warning them that the smears are hurting real people, damaging their businesses and even forcing some to go into hiding for fear of being murdered. The only thing that’s going to make smear merchants more circumspect about what they say is the prospect of a financial penalty. Smartmatic seems to have belatedly arrived at that conclusion too.

According to Smartmatic’s demand letters, these organizations [Fox, Newsmax, OAN] could have easily discovered the falsity of the statements and implications made about Smartmatic by investigating their statements before publishing them to millions of viewers and readers. Smartmatic had nothing to do with the “controversies” that certain public and private figures have alleged regarding the 2020 U.S. election. Multiple fact-checkers have consistently debunked these false statements with stunning consistency and regularity.

“They have no evidence to support their attacks on Smartmatic because there is no evidence. This campaign was designed to defame Smartmatic and undermine legitimately conducted elections,” said Antonio Mugica, CEO of Smartmatic. “Our efforts are more than just about Smartmatic or any other company. This campaign is an attack on election systems and election workers in an effort to depress confidence in future elections and potentially counter the will of the voters, not just here, but in democracies around the world.”…

Smartmatic’s only involvement in the United States in the 2020 election was as the manufacturing partner, system integrator, and software developer for Los Angeles County’s publicly owned voting system.

They haven’t filed suit yet, just taken the first step of issuing formal demands for a retraction from each of the three networks. I’m curious to see if they do the same with Powell. Her pockets may not be as deep as News Corp’s but she’s the one who took these conspiracy theories mainstream. She linked Dominion with Smartmatic and then linked them somehow to Venezuela and Hugo Chavez at the infamous press conference she gave with Rudy Giuliani and Jenna Ellis last month even though there’s no relationship between the companies. They’re actually competitors. And as the press release notes, Smartmatic’s product was barely used in this year’s election.

As for why Smartmatic moved ahead against Fox News et al. today, the answer seems straightforward: The demagoguery aimed at the company by Trump fans across the country has begun to cost it business. Some potential clients may not trust their software anymore, others may simply not want to be associated with a firm that’s been demonized by millions of people. “I don’t think there is one customer in the world that has not come back to us to tell us either that this is a problem and this could endanger our future relationship – for existing customers – or that this could endanger a potential new contract,” said Smartmatic’s CEO, calling the threat to his company “existential.”

Not all of the damage or potential damage done by the “stop the steal” hysteria is reputational. Like various election officials in Georgia and Michigan, members of the electoral college are under police protection today so that no one tries to murder them for doing their jobs:

In Michigan, Democratic electors have been promised police escorts from their cars into the State Capitol, where on Monday they will formally vote for Joseph R. Biden Jr.

In Arizona, state officials are holding the vote at an undisclosed location for safety reasons, far from what is expected to be a heated hearing on election integrity issues that Republicans will conduct in the Statehouse.

Even in Delaware, the tiny, deeply Democratic home state of the president-elect, officials relocated their ceremony to a college gymnasium, a site considered to have better security and public health controls…

“Trump supporters did not get the same kind of vitriol in 2016,” said Khary Penebaker, a Democratic elector from Wisconsin who will be casting his vote for Mr. Biden at the State Capitol in Madison. “This is some scary stuff, man, and this is not what America is supposed to be like.”

The Michigan legislature had to close its offices today because of “credible threats of violence” to the electors convening in the Senate chamber. A popular take among the commentariat is that the electoral college vote will finally give some Republican politicians cover to acknowledge that Biden won, which is probably true — sort of. I doubt we’ll ever hear Mitch McConnell say that Biden prevailed fair and square but we may get something out of him along the lines of “The process has played out and it’s clear that Joe Biden will be inaugurated.” But while the Republican establishment is reconciling itself to a Biden presidency (publicly, I mean — they were already reconciled privately on November 4), it may be that some small segment of Trump’s hardcore base is reconciling itself to other approaches. We’re at a fraught moment, one engineered by the president himself, and so there’s no reason to think Trump will say or do anything to make it less fraught. On the contrary, once the electoral college seals the deal he’s apt to become even more “erratic” — to borrow a polite term often used to describe his afflictions — as he’s forced to cope with the reality of defeat.

I’ll leave you with this.