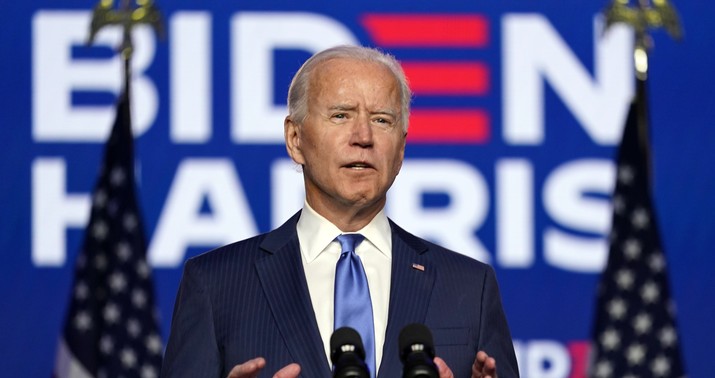 Quite a news day. In the span of about 10 hours, the U.S. passed 300,000 deaths from COVID, began distributing the Pfizer vaccine, had the Attorney General announce that he’s leaving, and formally elected a new president. California made it official at around 5:30 ET when its 55 electors finally pushed Biden over 270, but the shift towards acquiescence had already begun a few hours earlier when Newsmax — Newsmax! — began referring to him as the president-elect.

This morning the WSJ called on the GOP to acknowledge Biden’s victory and for Trump to concede, but it’s one thing for prestige right-wing media to throw in the towel and another for populist right-wing media to do it. Where do election truthers go now that Newsmax won’t go all-in on denialism? Your move, OAN.

Biden will speak at 7:30 ET, about 45 minutes after I’m writing this. “In this battle for the soul of America, democracy prevailed,” he’ll say according to his prepared remarks. “We the People voted. Faith in our institutions held. The integrity of our elections remains intact. And so, now it is time to turn the page. To unite. To heal.” That’s mighty optimistic of him, but it does appear that some Senate Republicans who’ve been shy about acknowledging that Biden will be the next president have started to bend a bit tonight. Right now they have as much cover as they’re ever going to get: SCOTUS nuked Texas’s lawsuit on Friday and the electoral college vote came off without a hitch today. Might as well bow to reality while everyone else is.

Sen Ernst: “I know for Iowans it’s disappointing, but the process is what it is and the constitution will be followed.”

Sen Thune: “At some point you have to face the music. And I think once the electoral college settles the issue today, it's time for everybody to move on."

Sen Braun: “The Electoral College has cast their votes and selected Joe Biden…Legislatures (and courts) have not found enough evidence of voter fraud to overturn the results.”

“[W]e were cool with a coup but now it’s awkward so time to focus on debt reduction and family values,” said a Twitter pal, summing up their position.

Not everyone has been so frank in owning up to reality. Kevin Cramer practically invented a new language in trying to acknowledge Biden’s win without actually acknowledging it:

The big one, though, is Lindsey Graham, one of Trump’s most loyal sycophants, who went so far as to phone Biden tonight to congratulate him:

Graham spoke positively about several of Biden's nominees, including Lloyd Austin for defense secretary, Tony Blinken for State and Janet Yellen for Treasury. He saidTanden — who will have to go through Budget (which he would chair in a GOP majority) – would be a "heavy lift."

There’s only one formal step left in this process before Biden is sworn in. That’s January 6, the day Congress accepts the vote of the electoral college. MAGA types in the House are plotting to object to the results in various states, which would force a floor vote in each chamber on each state’s results — which McConnell presumably does *not* want — but they need the help of at least one Senate Republican to make that happen. Will they get it? Hmmmm:

Senator John Thune, the Senate’s No. 2 Republican, said lawmakers had the right to challenge electoral votes but that the effort would get little support. “It’s their prerogative, it’s allowed for in the Constitution, but it’s not going anywhere,” he told reporters.

Senator John Cornyn, another veteran Republican, also said he thought any such effort “would be a bad mistake” soundly defeated in the 100-member chamber, currently controlled by his party.

Thune is the number two Republican in the Senate and Cornyn used to be number three. These aren’t backbenchers giving thumbs down to a floor vote, these are influencers. The only question is whether McConnell can keep all 53 Republicans in line; if he can, and no senator objects to any state’s results, then there’ll be no vote no matter what happens in the House. Which means purple-state Republicans won’t need to make an awkward no-win choice on whether to infuriate MAGA fans by accepting the results in swing states that Biden won or to infuriate Democrats by refusing to.

The more Republicans come around to acknowledging Biden’s win, though, the easier it is for holdouts to distinguish themselves as “fighters” in the eyes of MAGA fans. I’d expect that most of the presidential hopefuls, like Cruz, Hawley, and Cotton, will be a little slower to admit defeat and more careful with their language in how they admit it than the rest of the caucus. State legislators in particular have no strong incentive to acquiesce, which is why a state that prides itself on not being “messed with” continues to mess with other states in obnoxious ways:

New: Texas electors vote 34-4 to call on Legislatures in Pennsylvania, Georgia, Michigan and Wisconsin — whose election results handed the White House @JoeBiden — to appoint their own electors.

Moreover, they must acknowledge how much the Cowboys blow

Fetterman isn’t a rando. He’s the lieutenant governor of Pennsylvania.

I’ll leave you with this interview with Steve Scalise, who joined Texas’s disgraceful lawsuit against Pennsylvania and who continues to insist that the legal process must play out. Steve: It’s December 14. The electoral college has now voted. Trump’s legal team and their allies are something like 1-59 in lawsuits. It’s played out, in every sense of those words.

“Let the legal process play out.”

In 2016, Scalise congratulated President-elect Donald Trump 8 hours after the election was called.https://t.co/PChdHXK2zw pic.twitter.com/4PD21vtVhb

While the Elite Are Trying to Come Down on Redditors, Maybe People Should Be Looking At What Pelosi Just Did