Rudy: I got special treatment for COVID because I’m a “celebrity” 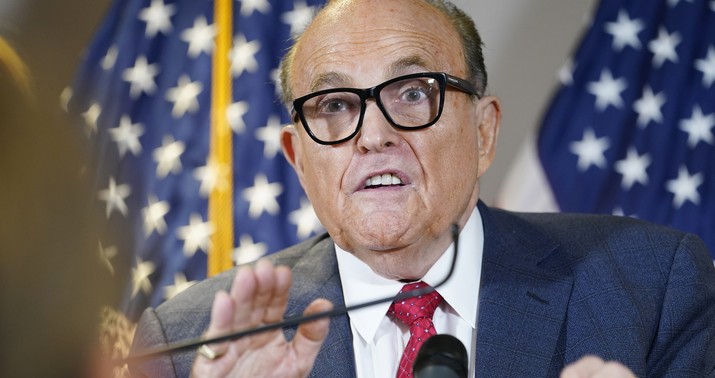 A perfect populist moment, inasmuch as populism has never been about leveling the playing field for the little guy so much as making sure that populist heroes get to break the rules with the same impunity as the old guard did.

In fact, reading the quote here from Giuliani, I had the same thought Greg Sargent did. It really is a pandemic-era version of “When you’re a star, they let you do it.”

I don’t begrudge Trump for having received special medication (i.e. Regeneron’s experimental antibody treatment) and his own suite of doctors when he came down with COVID. He’s the duly elected president, head of state, and commander-in-chief. The country has an interest in protecting his health. I don’t know what the excuse is for Giuliani getting priority over some random person’s grandpa, though. If you’ve ranted and raved about A-holes like Gavin Newsom cutting themselves special breaks from the pandemic misery the rest of us are forced to cope with every day, make sure you save some bile for Rudy too.

Ben Carson, Chris Christie and Donald J. Trump are not the sturdiest candidates to conquer the coronavirus: older, in some cases overweight, male and not particularly fit. Yet all seem to have gotten through Covid-19, and all have gotten an antibody treatment in such short supply that some hospitals and states are doling it out by lottery.

Now Rudolph W. Giuliani, the latest member of President Trump’s inner circle to contract Covid-19, has acknowledged that he received at least two of the same drugs the president received. He even conceded that his “celebrity” status had given him access to care that others did not have.

“If it wasn’t me, I wouldn’t have been put in a hospital frankly,” Mr. Giuliani, the president’s personal lawyer, told WABC radio in New York. “Sometimes when you’re a celebrity, they’re worried if something happens to you they’re going to examine it more carefully, and do everything right.”

It’s not all that different from Trump granting pardons to cronies. In one case powerful strings are being pulled to spare people from prison, in the other those strings are being pulled to spare them from death. Rudy may end up with the dubious distinction of being the only person to receive both kinds of special treatment. If it had turned out that some Pelosi flunky got a scarce, possibly lifesaving COVID treatment while the hoi polloi had to take their chances with a lottery, we’d treat it as a major scandal — appropriately. Giuliani’s privilege will pass largely without mention in populist media, though. Again, it’s not about equal treatment for elites and average people, it’s about making sure populist elites enjoy the same corrupt perks that establishment elites do.

It’s a pure coincidence, but I was struck by the fact that the news of Giuliani getting to cut the line was circulating on the same day as this arresting graphic putting the recent COVID death tolls in perspective relative to Rudy’s finest hour, 9/11:

5 of the deadliest days (from a specific event or cause) in recorded U.S. history have now occurred this month. #WearAMask pic.twitter.com/Vj3XWGY4jt

3,054 deaths yesterday, more than in the attacks 19 years ago. And it’ll be just as bad or worse today, and tomorrow, and potentially every day for the next few months. We haven’t even seen the death surge from infections incurred on Thanksgiving yet. The holiday was two weeks ago; new infections typically take three to four weeks to progress all the way to death.

Bill Kristol makes a fair point. Why would Rudy openly admit the indefensible fact that he got a rare antibody treatment unavailable to most others? Why not evince a sense of shame and humility by simply declining to comment?

All I can think is that he moves through life nowadays with a sense of such ludicrous impunity that he has nothing to fear from flaunting his privilege, not even social sanction. Anti-Trumpers already despise him and want nothing to do with him. Pro-Trumpers will forgive him anything thanks to his willingness to tell them what they want to hear at any given moment, including but not limited to insane, unprovable conspiracy theories about election-rigging. God knows they’re not going to punish loyal Trumpists like him or Ben Carson for benefiting from their connections to the president. That’s their treat for being good dogs.

I don’t know about Christie, though. He’s made the mistake of criticizing Trump lately, which jeopardizes his immunity from Republican criticism. He’s lucky Giuliani and Carson cut the same line he did, as that makes singling him out for phony-populist umbrage over his antibody treatment harder to pull off.

One last point to bear in mind. While it’s nice for all three that they managed to recover, the fact that each benefited (or seemingly benefited) from the scarce antibody treatments has probably convinced some Americans that the virus is less dangerous than it’s cracked up to be and therefore they needn’t take precautions. If someone like Christie who’s obese or Rudy who’s in his mid-70s can be back on their feet quickly, one might naturally wonder how severe the coronavirus can possibly be. Answer: *Maybe* not very severe if you’re a “celebrity” with access to special drugs. But how many average joes who watched them recover were aware of that very important detail? Or are operating under the mistaken belief that if they get sick and end up in the hospital, those drugs will be available to them too?

Ric Grenell: Who We 'Need to Watch' as 'Shadow President' in Biden Administration: It's Not Who You Think

New Squad member Rep. Cori Bush wins for the most insane take of the day