Hunter Biden: I just learned that I’m under federal investigation for “tax affairs” 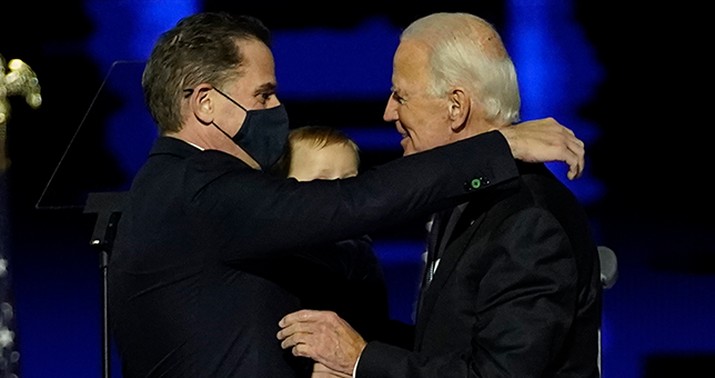 I’m picturing Trump trashing the Oval Office in a blind rage upon learning this news, then dialing up Bill Barr and screaming into the phone: Why didn’t this come out before the election?

It wouldn’t have mattered if it did, but POTUS is on a tireless hunt for ways to convince himself that his defeat was unfair. “The DOJ could have revealed this before November 3 but didn’t” is another one for the pile.

Do we know for sure, though, that Biden was being probed over tax matters before the election? It’d be weird if the investigation didn’t start until after his dad had been elected president.

Actually, we do know. Read on.

BREAKING: Hunter Biden, President-elect Biden's son, says in a statement that he has been informed that the U.S. Attorney’s Office in Delaware is "investigating my tax affairs." pic.twitter.com/J2iDvrLw2O

The first question: Does this somehow have to do with the fabled laptop and related claims about China and Ukraine made by Trump and Rudy Giuliani before the election? According to Politico, it does not:

a source familiar w/ the matter claims that this investigation is not related to the attacks the Trump team and their allies made against Hunter during the campaign.
Asked about what it IS about, they did not clarify further.

NBC is reporting an IRS lien was placed on Biden and his wife in November of last year over unpaid taxes. As of March 2020, that lien stood a bit north of $112,000 — but it’s not clear if that’s related to the new investigation. It wouldn’t be the first time Hunter’s run into tax trouble, though: He paid off a $450,000 state tax lien in July of this year.

Where’d he get that kind of dough? Good question. But it makes me think that today’s news probably isn’t connected to his federal tax lien. If it was, why wouldn’t he just pay off that one too?

Via CNN, here’s the part of this story that’s going to give Trump a conniption:

After pausing in the months before the election, federal authorities are now actively investigating the business dealings of Hunter Biden, a person with knowledge of the probe said. His father, President-elect Joe Biden, is not implicated.

Now that the election is over, the investigation is entering a new phase. Federal prosecutors in Delaware, working with the IRS Criminal Investigation agency and the FBI, are taking overt steps such as issuing subpoenas and seeking interviews, the person with knowledge said.

Activity in the investigation had been largely dormant in recent months due to Justice Department guidelines prohibiting overt actions that could affect an election, the person said.

POTUS is reading that right now, thinking, “What’s the point of having a Justice Department if it won’t help you win an election?”

More seriously, though, Hunter could be in real trouble if CNN’s sources are correct. Don’t ask me how any of this squares with the claim above that this new tax probe is unrelated to what Trump and Giuliani were screaming about in October:

Investigators have been examining multiple financial issues, including whether Hunter Biden and his associates violated tax and money laundering laws in business dealings in foreign countries, principally China, according to two people briefed on the probe.

Some of those transactions involved people who the FBI believe sparked counterintelligence concerns, a common issue when dealing with Chinese business, according to another source.

Not only did this investigation begin before the election, allegedly it began before Joe was a candidate for president — all the way back in 2018, CNN says. As for the allegations of money laundering, Fox News’s report on this story reminds readers that it obtained a DOJ “Receipt for Property” document for Biden’s laptop that listed the “Case ID” as 272D-BA-3065729. 272D is supposedly code for “Money Laundering, Unknown SUA [Specified Unlawful Activity]—White Collar Crime Program.” The “BA” allegedly refers to the FBI’s Baltimore office, which would have jurisdiction over Delaware cases.

Imagine Biden’s own son being indicted for some sort of money-laundering scheme — involving China — by his own DOJ during his first few months as president. An utter political fiasco. Maybe Hunter should call up Trump and offer to say that the ghost of Hugo Chavez really did meddle with Dominion’s voting machines in return for a pardon before January 20. No worse than a 50/50 chance that he’d accept.

Exit question: This long-running black comedy can only end with Hunter and POTUS finding themselves in adjoining cells in a minimum-security federal pen for tax fraud circa 2022, right?

Team Exotic: We have a limo — and a hairstylist — outside the prison for Joe’s pardon

Tucker Carlson BLASTS Dems' Attack on 'Domestic Terrorism': 'Something Awful Has Been Unleashed on Our Country'

THIS! Kick-a*s thread TORCHES media and the Left proving THEY'VE created extremists from normies who just want to be left alone

Romney: Come on, we’re not going to censure Cruz or Hawley

Corrupt former Baltimore mayor would like a pardon from Trump

So would Sheldon Silver

Confimed: Biden to immediately seek eight-year path to citizenship for millions of illegals, not just DREAMers

McConnell: Mob that sacked Capitol was “provoked by the president and other powerful people”

Not fixing the problem