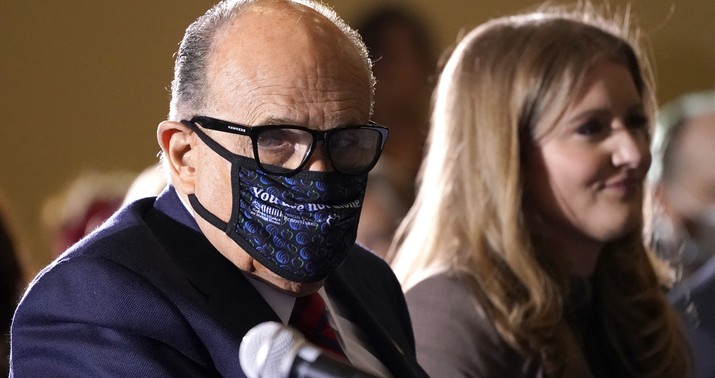 “[A] person in contact with the former mayor said he began feeling ill late this past week,” the Times reported last night. On Thursday he participated in a hearing before Republicans in Georgia’s state legislature. The day before that, he spoke at great length at a hearing before state GOP legislators in Arizona.

People with COVID can be infectious to others for “several days” before they begin to experience symptoms.

Conspiracy theories and disinformation may not have been the only things Rudy was spreading recently, in other words. The entire Arizona legislature will be shuttered this week as a precaution for fear that Giuliani inadvertently poisoned their bodies, not just their minds.

Giuliani had spent more than 10 hours discussing election concerns with Arizona Republicans — including two members of Congress and at least 13 current and future state lawmakers — at the Hyatt Regency Phoenix last Monday. He led the meeting maskless, flouting social distancing guidelines and posing for photos.

Giuliani also met privately with Republican lawmakers and legislative leadership the next day, according to lawmakers’ social media posts.

Some GOP lawmakers scheduled to take office next month, such as Representative-elect Judy Burges and Senator-elect Wendy Rogers, also attended. Audience members were spread out, but a photo posted by the Arizona Republican Party showed many participants, including Giuliani and Trump legal adviser Jenna Ellis, posing close together for a group photo.

During the hearing in Michigan, Giuliani asked a witness seated three feet away from him to … take her mask off:

It’s frankly amazing that it took him this long to get infected. According to Newsweek, no fewer than 40 people in Trump’s inner circles at the White House and the campaign have been infected with COVID so far. Giuliani had somehow managed to avoid it. He was part of the same debate-prep team for Trump as Chris Christie, Kellyanne Conway, Hope Hicks, and the president himself, all of whom eventually got the disease — but not Rudy. His own son tested positive a few weeks ago, the day after he attended the now-famous press conference at which Giuliani and Sidney Powell laid out their theories about a conspiracy to rig the vote — but Rudy was fine.

To all appearances he’s never been a stickler about wearing masks either. Yet until this week, almost miraculously, he had somehow had managed to tiptoe through the raindrops and avoid catching coronavirus. Eventually the odds caught up to him.

Reportedly he’s at a hospital in Georgetown today, supposedly experiencing “mild symptoms.” I’m skeptical about that last part. Would a hospital really sacrifice a bed, even for a VIP, to treat him for “mild symptoms” at a moment when they’re under pressure from COVID’s spread? Trump and Christie were each hospitalized for a time and recovered but each had more than “mild symptoms” during their stays. I hope Rudy gets well soon, not just for reasons of basic compassion but because it feels ludicrous for him to have contracted a debilitating disease while working on a project as futile and ignoble as the Trump campaign’s embarrassing election lawsuits.

Speaking of which, I’ll leave you with this. Giuliani’s helped to put a lot of people in danger over the past four weeks, and not every example is related to COVID.

The individuals gathered outside my home targeted me as Michigan’s Chief Election officer. But their threats were actually aimed at the 5.5million Michigan citizens who voted in this fall’s election, seeking to overturn their will. They will not succeed in doing so. My statement: pic.twitter.com/RSUnPSN4Aa

Dana Loesch learns she's not eligible to join Twitter's Birdwatch program, and the reason is gold