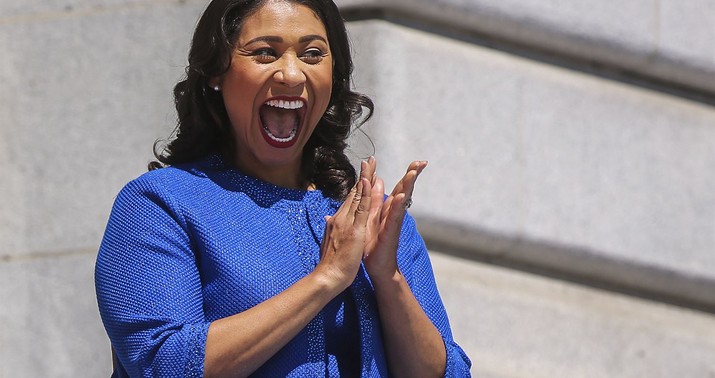 And she did it just one day after Gavin Newsom did, it turns out. What makes this case especially depressing is that San Fran Mayor London Breed had built a reputation as a stickler for good COVID practices, with impressive results. Back in March, when Andrew Cuomo and Bill de Blasio were wringing their hands about what to do in NYC, Breed had already issued a stay-at-home order for SF. Result: New York City has seen nearly 25,000 deaths from COVID while San Francisco, which has a bit more than a tenth of New York’s population, has suffered just 160 to date.

Breed also outperformed colleagues like San Jose Mayor Sam Liccardo on Thanksgiving. While Liccardo was sneaking off to visit his parents after encouraging residents not to travel, Breed reportedly dined alone at home. If you’re going to be a hard-ass in setting rules for social distancing, you’re duty-bound to set a good example. Breed did. Or so everyone thought.

After this story dropped last night, her spokesman was quick to remind critics that she hadn’t technically broken any rules by having dinner at the French Laundry on November 7. Napa County, where the restaurant is located, allowed both indoor and outdoor dining at the time and it’s not clear if Breed’s party of eight involved people from more than three households, which is a no-no under California regulations. (Technically that rule doesn’t apply to restaurants, an inane loophole that makes the entire social-distancing scheme seem arbitrary.) But here’s the wrinkle: Breed’s own rules for the city she governs would have banned the sort of dinner she attended.

So why the hell did she go? If it’s unsafe for San Franciscans, why wasn’t it unsafe for her?

Breed took a few days off after election day and joined seven others the night of Nov. 7 to celebrate socialite Gorretti Lo Lui’s 60th birthday, Breed’s spokesman Jeff Cretan confirmed. The party of eight dined in the same kind of partially enclosed room with a ceiling and chandelier as Newsom did — making it more of an indoor dining experience than an outdoor one…

While indoor dining was allowed in Napa County at the time with no specified limit on the number of households, the state’s guidelines “strongly discouraged” social gatherings and capped them at three households…

The dinner would have certainly violated San Francisco’s health guidelines if it took place in Breed’s own city. San Francisco has issued stricter guidance than the state for several types of businesses, including restaurants, which were not supposed to seat groups larger than six indoors or outdoors unless everyone lived together. Three days after dining at the French Laundry, Breed banned indoor dining in San Francisco altogether.

Yesterday, hours before her soiree at the French Laundry was revealed, she warned San Franciscans that more severe restrictions were on the way as COVID cases in the city climbed. How seriously do you think locals will take those restrictions knowing that the mayor granted herself a VIP exemption a few weeks ago for nothing more important than a dinner party?

Really bad. California has had the strictest regulations throughout the lockdown, often keeping schools and outdoor stuff closed in a way that hasn't been particularly science-driven, and they've been undermined by Newsom and now Breed in a public, ostentatious way. https://t.co/4wdcqpPXZk

It could be worse, I suppose. In L.A., not only are the restrictions harsh (outdoor dining is banned for unclear reasons) but infuriating VIP exemptions to good pandemic practices are granted right out in the open:

[Phillip Kim] was “fairly livid” Monday afternoon when — less than 24 hours before his scheduled appointment — he received an email informing him that the [COVID] testing site was canceling all of Tuesday’s appointments “due to an event being held at this location.”…

Fairly livid would turn to very livid when Kim learned of the reason for the closure. After Kim shared a screenshot of the email with other members of Ktown for All, the activists did a little sleuthing and quickly discovered that the event in question was a film shoot.

Hundreds of coronavirus testing appointments at a transit hub were being canceled to accommodate filming of a gender-swapped remake of “She’s All That” starring a TikTok personality. Yes, that is a real sentence and not satire.

Forced to choose between urgently slowing the spread of a killer disease amid rising case counts and letting Hollywood make a guaranteed-to-be-unwatchable comedy, city government gave Hollywood priority. Initially, at least: The decision was reversed after word got around and locals begin reaching for torches and pitchforks.

MPs spent hours telling us we should lock down, socially distance, and wear masks… then after the debate, they patted each other on the back with no social distancing or mask-wearing – including the Prime Minister breaking his own rules.

Rules for the many, not the few… pic.twitter.com/wnJ1yXiKSc