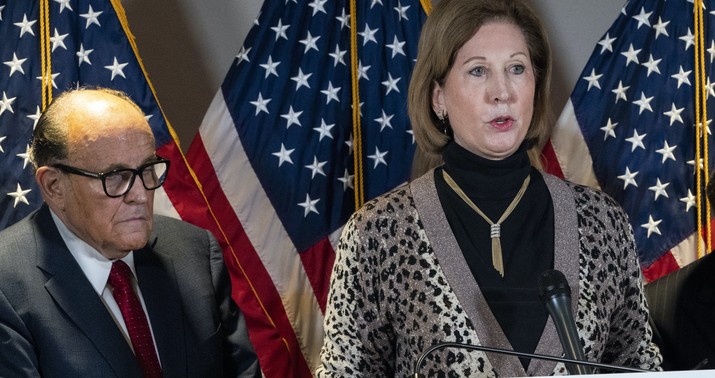 Here’s one more conspiracy theory for the hopper: What if Sidney Powell is actually a Democratic plant working undercover to help Chuck Schumer win a Senate majority?

"There should not be a runoff," says Sidney Powell. "I think I would encourage all Georgians to make it known that you will not vote at all until your vote is secure."

Crowd cheers. How is this a winning strategy for January 5th? pic.twitter.com/q5O3OYPrKu

I can’t find video of that quote but numerous other reporters watching today’s press conference/rally with Lin Wood — since when do lawyers have “rallies”? — are reporting it that same way. Apparently Powell went on to say that she thinks Georgians should boycott elections “regardless of party” until this Kraken business is ironed out, but of course there’s not a Democrat in the state who’ll pay her any mind. If she ends up depressing turnout, it’ll be among one party exclusively.

And in a state where Trump lost by just 12,000 votes, that’s potentially decisive.

Wood also encouraged Georgians not to vote amid leading the “rally” crowd in chants of “lock him up” about Georgia Gov. Brian Kemp:

"They have not earned your vote. Don't you give it to them. Why would you go back and vote in another rigged election for god's sake! Fix it! You gotta fix it!" pic.twitter.com/Uvj1QIpqFL

“Giving away the Senate majority in order to own the libs,” says NRO’s Ed Whelan. Gotta say, though, I like this idea:

I am watching the "Stop the Steal" rally and have started drafting a tweet about 20 times…but mere words cannot convey what is happening.

Example: Lin Wood just announced that Sidney Powell and Major Mike Flynn should run as a presidential ticket in 2024.

A party beholden to conspiracy theorists is unfit to govern. If Powell or Flynn or whoever wants to pied-piper some of those conspiracy theorists away, dividing the Republican base, that’s probably good for the country long-term. Although, ironically, if it happens, panicky establishment Republicans will suddenly become desperate for Trump to run again after all. He may be the only figure in the party who can keep the fringy and non-fringy elements of the GOP together. His first big test will come three days from now when he shows up in Georgia and tries to walk a line between Brian Kemp on the one hand and Powell and Wood on the other. The vote was rigged and Kemp did nothing, Trump will say! But also you should turn out and vote in the next Kemp-run election on January 5! That makes no sense, but it’s the message with which Trump has saddled himself by how he’s handled the past month.

A poll out today finds Georgia voters narrowly prefer to see the GOP control the Senate, 46/42. Interestingly, Republicans are also more enthusiastic to vote than the opposition with 84 percent saying they’re likely to turn out versus 80 percent of Democrats saying so. Numbers like that make you wonder how many righties *really* believe the election was stolen and how many are echoing Trump’s conspiracy theories as a form of tribal loyalty, not unlike a “gang tattoo.” There’s no arguing with Powell’s and Wood’s logic that it’s foolish to vote if you think Georgia’s voting system is rigged. To turn out anyway under those circumstances necessarily requires believing on some level in the integrity of the process.

The recount of the Georgia presidential election is ongoing, by the way. Guess what.

“We have seen no substantial changes to the results from any county so far. And that’s what we expected, and I think that’s what most other people have also,” Raffensperger said at a press conference from the south stairs of the Georgia Capitol.

He also said 110 counties have finished their work on the recount as of Wednesday morning and he anticipates that all 159 counties in the state will finish their recount by a midnight deadline. Recount results will begin to be posted online starting Wednesday afternoon.

If you can spare 10 minutes, watch Erick Erickson’s commentary on the conspiracy theories about voting in Georgia. Erickson’s a longtime radio host and blogger but in his earlier career he was an elections lawyer in Georgia. As he explains, the theories of chicanery involving Dominion Voting Systems are particularly kooky given all the precautions taken to ensure the integrity of the vote — isolation from the Internet, a paper trail in the form of paper ballots, independent check-in systems to keep count of the number of voters so that the ballot machines can’t be “stuffed,” on and on. Erickson’s worried about the GOP blowing the runoffs because Trump, Powell, and Wood keep trying to sour them on voting. Given how tight the final margins are likely to be, he should be.