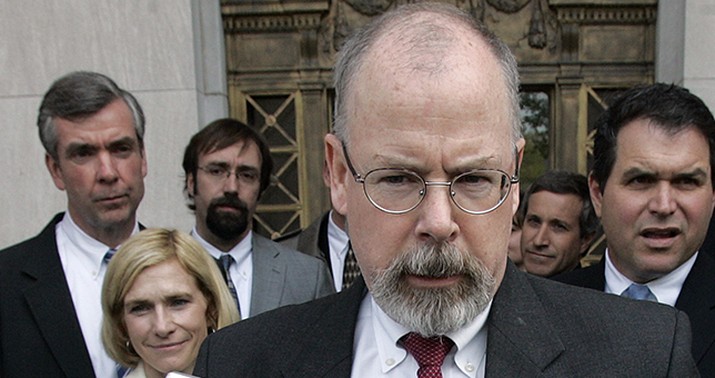 Biden and his AG were never going to fire Durham. That would reek of obstruction of justice considering Durham is investigating matters that began under the Obama/Biden administration. Biden is aiming to be the “norms” president, right? Well, one way to follow “norms” is not to mess with a federal prosecutor who’s wrapping up a months-long criminal investigation.

Besides, who’s the biggest fish that might conceivably be netted by Durham? James Comey, right? Well, Democrats don’t care about him. Comey’s the guy who cost them the 2016 election by reopening Emailgate at the last second. If Durham ends up frog-marching that big goon into the back of an FBI van, the whole country will high-five over it.

Why, it could be just the unifying moment a bitterly divided America needs.

Anyway, just in case Team Joe was tempted to short-circuit the Durham probe, Barr’s gone and made its lead prosecutor a special counsel. Now, if Biden wants to rid himself of Durham, he’ll have to shred a norm even Trump was unwilling to shred when he allegedly considered firing Robert Mueller before thinking better of it.

With the 2020 election approaching, Barr told the AP on Tuesday, “I decided the best thing to do would be to appoint them under the same regulation that covered Bob Muller, to provide Durham and his team some assurance that they’d be able to complete their work regardless of the outcome of the election.”

The current investigation, a criminal probe, had begun very broadly but has since “narrowed considerably” and now “really is focused on the activities of the crossfire hurricane investigation within the FBI,” Barr said. He said he expects Durham would detail whether any additional prosecutions will be brought and make public a report of the investigation’s findings…

The focus on the FBI, rather than the CIA and the intelligence community, suggests that Durham may have moved past some of the more incendiary claims that Trump supporters had hoped would yield allegations of misconduct, or even crimes — namely, the question of how intelligence agencies reached their conclusion that Russia had interfered in the 2016 election.

Appointing Durham as a special counsel would mean that he could only be fired for very specific reasons under the law.

Sounds like it’s the Comey/McCabe/Strzok crew that has the most to fear. An interesting detail in today’s news is that Barr didn’t elevate Durham to special counsel recently. He did it before the election — and kept it a secret:

“I … previously determined that it was in the public interest to toll notification given the proximity to the presidential election,” Barr wrote in a letter to congress today. pic.twitter.com/TJWkEugYj1

Barr did what Comey famously refused to do in 2016 when Comey announced 10 days before the election that he had restarted the Emailgate investigation. That is, the AG kept a bit of provocative criminal justice news to himself lest the announcement of it end up influencing votes on Election Day. I wonder how Trump feels about that, having been the inadvertent beneficiary of Comey’s break with norms. If Comey was willing to goose an election for Trump by announcing some criminal justice news, why shouldn’t his own Attorney General do the same?

If he thinks it through, he should be glad that Barr kept his mouth shut. Making Durham a special counsel was obviously a move Barr felt obliged to make because he thought Biden stood a good chance of winning. You don’t need to worry about Durham getting fired in a second Trump term; you do need to worry about it in a Biden first term. If Barr had announced on October 19 that he’d granted special-counsel status to Durham, the media would have a field day with headlines like, “EXPECTING DEFEAT, TRUMP AG LOOKS TO PROTECT PROSECUTOR FROM BIDEN.” Trump should be grateful that Barr spared him from that.

But you never know how he’ll react. He’s forever suspicious of the “deep state” undermining him and he no longer seems to trust Barr so he’ll probably end up convincing himself that Barr hid Durham’s appointment from the public in order to damage Trump somehow. If only Barr had announced the special counsel news, my base would have felt a surge of enthusiasm that would have carried me to victory.

Here’s an interesting legal point which I don’t think will matter much in the end:

So Barr is (belatedly) announcing that he appointed a Special Counsel *inconsistently* with DOJ’s own regulation. https://t.co/cnbP7PpShk

I doubt Biden’s DOJ will terminate Durham’s investigation whether he is or isn’t a proper special counsel under the law. Ending the probe early would look so dubious and politically self-interested that it would end up doing the administration more damage than whatever Durham’s findings turned out to be. They should just let him finish, collect any brownie points from voters for not interfering with a Trump-era investigation, and move on.