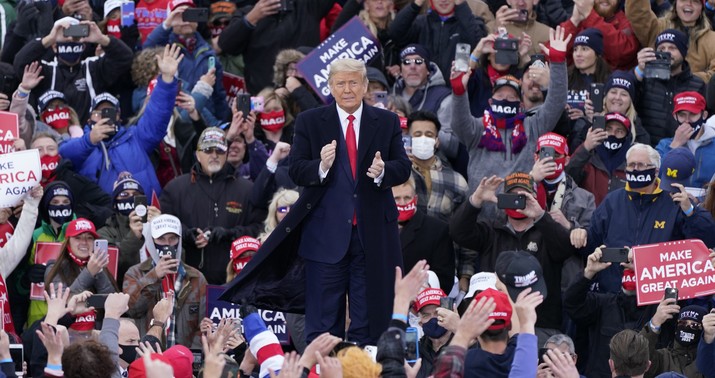 I’m skeptical that they did him any harm but this analysis makes clear that they didn’t help. Or at least, not nearly enough.

Which is logical. Why would a rally being held nearby affect any voter’s choice, especially a rally late in the race when people’s minds are already made up? Activists tend to obsess about rallies because they’re more into politics than the average person is so the pageantry of a big political event excites them. As fans of the candidate, they also think he has it within his power to move votes through sheer charisma by preaching his message in a visible format. And of course they believe — or want to believe — that most Americans agree with them about politics, and the spectacle of a crowded rally feeds that illusion. If 10,000 Trump fans show up to cheer the president raucously a week before Election Day, that must mean he’s en route to victory, right?

Of course not. You could pick any city at random in deep blue California and find thousands of Trump fans willing to turn out and cheer for him. The enthusiasm of a relatively small, select crowd tells us zippo about the sentiments of an entire state.

Dante Chinni of NBC looked at the 30 swing-state counties where Trump held rallies during the final two weeks of the campaign. When the votes were tallied on Election Day, it turned out he improved over his 2016 results in … five. In the other 25 he either won with a smaller margin than he had four years ago or the county flipped to Biden.

In Michigan, Trump held five events in the last two weeks of the campaign and in every one of those counties, his 2020 margins were worse than they were in 2016. Some notable examples are below.

On Oct. 27, Trump held a rally in Ingham County, the home of Lansing, and in the election results he did 5.5 percentage points worse than he did in 2016 as Joe Biden beat him there by more than 32 points. On Oct. 30, Trump held an event in Oakland County north of Detroit. He lost Oakland by 14 points this year — 6 points worse than he did in 2016. And on Nov. 2, Trump held a rally in Grand Traverse County in the northern reaches of the state. Trump still won the county, but by only 3 points, which was 9 points less than his margin in 2016.

The pattern was similar in Pennsylvania. Trump held seven events in the state in the last two weeks of the campaign and in every county Trump visited he did slightly worse than he did in 2016.

Trump visited Erie, the ultimate swing county in the state, on Oct. 20 and in the end the county narrowly flipped to Joe Biden by a single point after narrowly backing Trump in 2016. The president visited Lancaster County on Oct. 26 and he still won it by about 16 points, but that was 3 points less than he won it by in 2016. And on Nov. 2, Trump visited Scranton, in Lackawanna County, but when the votes were tallied he lost the county by more than 8 points, roughly 5 points worse than his loss there in 2016.

Did Trump’s rallies backfire by alienating local voters? Well … possibly. It could be that locals disliked his insistence on holding mass gatherings at a moment when the pandemic was worsening, especially with the likes of Fauci warning on TV that rallies were ill advised under the circumstances. But even in that case, we’re probably talking about a negligible number of votes. Anyone willing to vote for Biden because of how Trump handled the pandemic was in Biden’s corner before the last two weeks of the race, especially when you consider that he’s the most overexposed president in American history. How many voters had no idea that he was holding rallies as cases were spiking until he happened to show up in their county? The events were mentioned or even simulcast frequently on cable news.

The likely truth here is much simpler. He scheduled rallies in these 30 counties because polling and other metrics gave him good reason to believe they were already slipping away before he showed up. He held an event in hopes of stanching the bleeding and turning the tide because there wasn’t much else he could do. The rallies probably didn’t backfire by costing him votes but they didn’t succeed either in upending the image of him that each voter had absorbed after watching him day after day for four years. In fact, one of his great successes on election night further proves the point: Chinni notes that Trump held one of his 30 rallies in Miami-Dade County, where he overperformed his 2016 numbers by nearly 22 points(!) against Biden. Was that because the event he held there was such a smashing success? Nah, of course not. It’s because Biden lost ground to Trump among Latino voters all over the country for complex reasons and there are many Latino voters in Miami-Dade. The rally there was incidental to Trump’s eventual victory in M-D, I’d guess, just as the rallies in Pennsylvania and Michigan were incidental to his defeat in those states.

But that brings us back to the point up top. Rallies just don’t matter. It’s folly to treat them as indicators of anything, including enthusiasm. It’s true that Trump’s voters were far more enthusiastic about their candidate than Biden’s voters were about theirs, a point that’s been cited repeatedly (including by Trump) as “evidence” that Biden couldn’t possibly have won. But Biden had tons of enthusiasm behind him: The enthusiasm was simply anti-Trump instead of pro-Biden. His voters didn’t turn out because they were desperate to see him become president, they turned out because they were desperate to see Trump ousted. In the end there were more Trump-haters than Trump-lovers, which jibes with the fact that he never once enjoyed an approval rating of 50 percent during his term. He’s a polarizing figure and he ended up polarizing a few more people against him than for him. Simple as that.

John McCormack wrote today about another misconception being used as “evidence” that there must have been election fraud, namely, that Republicans downballot did well while the president himself lost. How can that be? It’s pretty straightforward: The large contingent of Trump-haters included a strain of right-wingers and right-leaning independents who wanted Trump out but didn’t want Democrats running roughshod over the federal government. So they got rid of the guy they wanted to get rid of and made sure Republicans downballot didn’t suffer because of it. But even so, there was nothing bizarrely unusual about the amount of ticket-splitting:

Why are some Trump fans baffled he could lose while House GOP made gains?

But it would have been a 51-49 Senate if Republicans hadn't blown Senate races in four states where Romney won by double digits: Missouri, Montana, North Dakota, and Indiana.https://t.co/axKOwu9T8c

Instead of asking “How could Trump lose while Republicans won downballot?”, one could as easily ask, “How could Democrats downballot lose while Biden won?” No one has any trouble grasping the logic there. They lost because the “defund the police” and “socialism” rhetoric spooked a lot of swing voters but Biden himself was somewhat immune from it thanks to his long pedigree as a centrist and the strong anti-Trump sentiment propelling his candidacy. At the presidential level the election was a simple choice between Trump and Not Trump. Voters preferred the latter. Democrats downballot weren’t so fortunate in their own races.